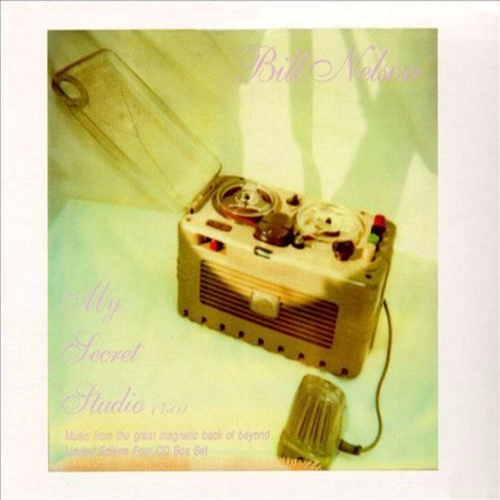 4CD reissue of the long out of print boxset originally released in a limited edition run in 1995, which collects together unissued recordings from Bill Nelson’s years of turmoil between 1988-1992. Ian Canty looks some rare output of the hidden national treasure…

I’ve never been to Wakefield, but I would hazard a guess the people from that neck of the woods have their heads screwed on right. It is a crying shame that Bill Nelson is generally forgotten these days, but in his home town they have at least given him a well-deserved star on their walk of fame. If you’re snickering at this you are wrong and Wakefield is right: Bill Nelson is a huge talent and thoroughly deserves such an accolade and much, much more.

Though he is probably best known for his time in the ground-breaking Be Bop Deluxe, even before they formed he had carved out of niche for himself, with a few low-key collaborations and his solo Northern Dream album, a favourite of a certain DJ called John Peel. Soon afterward Nelson pulled the first line up of Be Bop Deluxe together and they were snapped up by EMI’s ‘progressive’ imprint Harvest.

The genius of Bill Nelson was clear for all to see in Be Bop. No-one, but no-one has ever managed to jam Glam, Hard Rock and Prog altogether to make such an attractive package even half as tasty. Nelson’s incredibly bendy guitar playing was a highlight, but whatever the line up (and it fluctuated wildly throughout the band’s six year life span), they carved out an enviable reputation as a red-hot live act and cranked out the classic LPs Axe Victim, Futurama, Sunburst, Modern Music and Drastic Plastic in just four years (and that’s not counting the fine documentation of their stage show Live! In The Air Age from 1977). That is before we even begin to speculate on their huge influence on “alternative” music from Post Punk onwards.

As the ’70s wore on Nelson saw the way the wind was blowing with the last two Be Bop albums Modern Music and Drastic Plastic, both of which certainly did not sound out of place amongst the Punk New Wave. Seeking a clean break with the past he folded the band in 1978 and instantly formed his Red Noise, producing the terrific Sound On Sound LP a year later. Moving onto a solo career with Quit Dreaming And Get On The Beam, he was also an in demand producer manning the boards for the Skids and Gary Numan among others. Just before the first recordings here, his label of the time Enigma folded leaving him without a record deal, which meant he had plenty of time to develop his ideas in his home studio but no way of releasing them.

It is no secret that the time of recording the albums included here Bill was going through a hard time. He was beset by personal and business problems, having to endure a long running dispute with a former manager over back catalogue royalties. The protracted legal wrangling took his energy away from his career and resulted in these albums barely seeing the light of day, only in a limited edition release years after they were recorded. One might expect these unreleased efforts, recorded by Nelson with an eye to forming a new band, to be little more than first drafts, demos and rehearsals.

This collection (that originally appeared in 1995 as a brief self-issued vinyl set) is a fascinating glimpse into the working process of an artist developing ideas at an early stage, but that isn’t quite a full explanation of what was going on here. Though Nelson was undoubtedly doodling around in down-time, the first selection Buddha Head certainly has enough good points to be an official release in its own right. In fact many of these offerings arrive in a fully developed state as highly skilled Pop songs, with others being short ideas put to tape with the intention to be expanded upon at a later date. Even in this basic stage he was still throwing in his inspired guitar wrangling, but electronics were also in the ascendancy in his work at the time, with synths and drum machines being used out of necessity. The general style here bears comparison to Bowie’s work from Scary Monsters onwards with a little of Japan and John Foxx’s solo career thrown in, but it’s all marked indelibly with Bill’s own personal touch.

If My Philosophy quotes Joy Division (“She’s lost control”), this is far from being just melancholic tales of a tortured artist. The Heart Has Its Reasons might sound like a reference to his personal issues but on the face of it, the tune is sunny and bright, a lovely, gentle elegy to a love affair passed. The Big Illumination sports a marked Indian influence and some blinding guitar heroics but as always Nelson doesn’t let it get in the way of the tune. We Will Rise recalls Systems Of Romance era Ultravox! (well Bill did sort of invent that sound!), but for the most part these songs are cool Electropop with the kind of hazy, “sun glinting in the eyes first thing in the morning” production you only really got at the tail end of the ’80s.

To me, Electricity Made Us Angels isn’t quite as good, having a few “ho-hum” moments amid the inspiration. That’s not to say there isn’t good stuff on here, but this disc seems to be more of a case of the artist trying things out, making small adjustments in the pursuit of the perfect electronic ballad, more revealing of the “demo” nature of the recordings. The pretty but sparse “music box” sound given to The Girls I Loved is charming and fitting ideally to the subject matter and there is a really catchy hook to God In Her Eyes, with some meaty riffing too. Bill even manages a bit of crooning on Wonders Never Cease, but a few selections on Electricity tread a well worn path of ’80s Pop, which brings things down a little.

Better and following on in similar fashion to Buddha Head is Deep Dream Decoder. This fantasy-like qualities of that album are if anything magnified, with a slight unreal feeling adding a touch of the surreal to the wistful remembrances in the lyrics. Clearly the struggles Bill was having in his life were reflected in the songs. This album is a little bit rougher around the edges than Buddha Head, but still contains a lot of Bill’s trademarks of guitar twisting and wise story-telling.

Dreamnoise And Angel has a magnificent rush of guitar enhancing some pacy synth-pop and the title track tweaks a little bit of Prince circa When Doves Cry as well as meeting an odd sitar section head on. Rise (Above These Things) starts with a plaintive “another night in hell, no-one comes to call” but after that it’s an anthem to not letting life grind you down. Evidently Nelson was made of the kind of stuff that didn’t just give up in the face of adversity and on Deep Dream Decoder you can still feel the joy of someone slowly casting off their demons and relocating their angels.

The final selection here Juke Box For Jet Boy doesn’t really look back at Bill’s Glam past as the title might lead you to expect – though both Dream Up Billy and All You Need To Know have hints of that Be Bop Deluxe majesty. This one also contains the loopy John Shuttleworth sound of Only Dreaming and set opener She’s So Extreme even resembles Big Audio Dynamite a bit. In his home studio Bill wasn’t totally isolated from the outside world as it might have seemed as there is a pronounced Hip Hop influence to the percussion of Run Away and Turn Me Over. Juke Box provides a satisfying end to proceedings by getting away from the later ’80s Electropop of the early discs and letting Bill cut loose in different directions. He had much still to do!

Of course this beautifully presented boxset will be essential for Nelson aficionados, but fans of inspired guitar work and electronica should also dig it too. All that is really lacking an in-depth commentary from the man himself – he does contribute a short, succinct sleeve note which perhaps says it better than any 5000 word essay could: “What you will hear is the raw stuff of dreams, instant song-writing with a vengeance. Nothing here is state of the art, merely state of the heart”. And that is My Secret Studio Vol 1 in an nutshell.