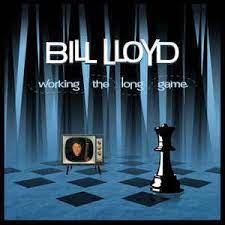 Reissue of multi-instrumentalist Bill Lloyd’s album from 2018 on Spyderpop, his ninth long player in a solo career that began with his debut Feeling The Elephant back in 1986. The twelve tracks featured here include writing collaborations with Tom Petersson from power pop legends Cheap Trick and Graham Gouldman, ex-10CC. Ian Canty labours long and hard…

Nashville’s own Bill Lloyd has managed to compile an impressive and lengthy musical resume over the past thirty years or so, both with a number of different outfits and on his own. During that time he has worked with some big names like Glenn Tilbrook of Deptford Fun City new wave mastodons Squeeze and the visionary leader of The Kinks Ray Davies. He also made up fifty percent of country rock duo Foster & Lloyd, the other half being Radney Foster. This pairing enjoyed a great deal of success in the US during the 1980s on the country charts there, before they opted to split up in 1990 so they could both pursue solo careers.

Prior to this parting of the ways, Lloyd had already started things off on his own with the Feeling The Elephant LP from 1986. He quickly marked out his own path, something that touched on the country rock he was known for, but also which often harked back to some strong power pop core values. It is his 2018 record Working The Long Game for Spyderpop is given a deserved reissue treatment through Big Stir here.

Getting down to business, Satellite sets Working The Long Game off with a springing jangly pop nugget of high quality. You can immediately feel the work and talent that has been put in to produce an instantly memorable and agreeable whole. Slight country tinges hark back to his past, but this number really swings in a more modern fashion too. It is followed by the title track’s easy-going pop vigour, which is full of neat instrumentation. Then comes the slightly tougher strutting pop/rock sound of Make That Face, an almost completely solo effort bar Brad Jones’ vibes. The melody on this is so bright and fresh, presenting something thrillingly ebullient.

A co-write with the great Graham Gouldman in What Time Won’t Heal comes next and this is a real masterwork of gently rocking light psychedelia, a lovely sound. Wake Up Call’s acoustic balladry takes the tempo down a stage further, but very attractively with a chilled and excellently judged string arrangement. ‘Til The Day That I Break Down, which follows, has a kind of “music box style” intro which soon gives way to nicely rough and flowing mid-paced guitar rock tune with some smart phasing effects applied. A freewheeling, very infectious Go-To-Girl steams in afterwards with some country rock inflections tying in closely with Bill’s past form.

Cheap Trick bass player Tom Petersson, who with Lloyd formed part of Project: Ghost Outfit, co-wrote Yesterday (no, not that one) and also plays on it too. This is a textbook example of finely crafted, powerful pop music with guitars that chop in and ring heavenly in just the right places. Great guitars feature heavily too on Interrupted with the 12 string being much in evidence, this one has a definite swagger and real hook that helps to mark it out as a gem. The buzzing solo is cool too. Then comes Merch Table, continuing this harder rocking section of the LP. It is a real ace of acute observation, with laidback verses contrasting with the chorus’ elegant build up and euphoric release.

Miracle Mile was written with Pat Buchanan, who played in Bill’s band The Tallymen as recently as 2019. This song combines a sharply observed lyric with musical backing which slowly winds up the tension, before the rhythmic thump leads to a truly satisfying refrain. Final track Shining takes us back down again, sensitively applied drums and piano playing a part in the construction of a real beauty of pop precision. I gleaned the following from it, which may or may not be correct – any sense of loss at the end of a relationship is eventually outweighed by knowing that you are somewhat enhanced by the knowledge gained in the experience you have been through and will always carry that power with you. That’s my take anyway and all things considered, this is a super way to wind up any record and certainly ends Working The Long Game in a suitably show-stopping manner.

Power pop means different things to different people. For me the term implies that an ideal balance is to be struck between musical might and attractive melodies. This balance is something that Bill Lloyd achieves effortlessly on the 12 numbers that make up the album, bringing all his years of experience, talent and craft to bear on a record that is consistently addictive and edifying. Catching up on your homework was never such fun, as Working The Long Game comes at us from 2018 with tunes, beautifully deployed musicianship and real soul.