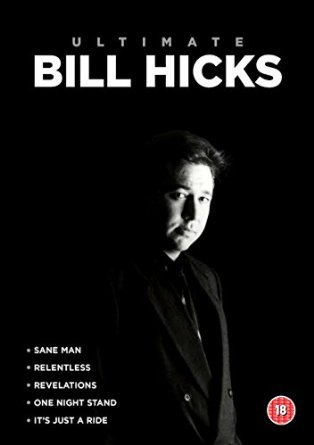 Collecting three stand-up DVDs and a documentary into one box-set, Ultimate Hicks is a definitive collection for long-standing fans and the curious alike. Simon Tucker reviews.

Preacher, slanderer, spiritualist, demon, genius, dark poet….Goatboy. Bill Hicks was many things. A myriad personality awash with contradiction Hicks was a true rock ‘n’ roll comedian. Sometimes beautiful, often crude, he walked a fine line between the offensive and the sublime. Much like the musicians he admired and referenced (Hendrix, Lennon, Richards) Hicks’ material will leave a lot of modern audiences siphoning out the negative aspects of his act and personality (Lennon had been an abusive husband yet is now canonized as a saint, Richards let people think they could live his life with often fatal consequences) and focusing on the righteous but in doing so would be naive as it does not allow you to get a full picture of the man rightly heralded as one of the most important comedians of all time. In fact, the nearest comparison would not lie in the world of music or comedy but in literature. Charles Bukowski is rightly revered but looking at his works now can leave a bitter taste in the mouth especially when it comes to his attitude to women. Misogyny is rife in the work of Bukowski and there are smatterings of it throughout the gigs we witness here. Hicks’ description of female genitalia and his attitude towards pornography (especially knowing what that industry is like) can now seem out of step with modern attitudes. The flip side to that coin is of course the fact that even though the delivery and terminology may fill you with unease, the point of the bit was often positive and correct.

Another aspect that can be trying is the sheer repetition of bits albeit with added flair and nuances. The smoking section gets familiar quick and is probably the weakest of the Hicks’ material though there is now an added poignancy due to his untimely death to cancer at the young age of 32 and when we arrive at Revelations (’93) and Hicks’ has become one of those dreaded ex-smokers the section does get altered accordingly and is actually better for it. His description of what a cigarette looks and smells like to an ex-smoker is spot on although most of us would probably leave out the Claudia Schiffer remark..

Bill’s first full-length special Sane Man is a perfect entry point to anyone new to his world and it one of the strongest sets here as we are introduced to the world of rednecks (“we want our thumbs”), Jim Fix (“how do you write a book about jogging? right foot, left foot, speed up, shower”), the state of modern music (Rick Astley, Tiffany, and Debbie Gibson are the targets this year) and mass consumerism. It is with this last subject where we get glimpses of Bill’s real genius and his foresight as he lays into the trend of shopping malls and talks about the year 2000 where all malls will be joined and people won’t have to go outside to get their goods. Basically the world of internet shopping we all now inhabit. We’re happy consumers…

Another section that is, sadly, still so relevant is his musings on the Gulf War. At one point in history you could watch his musings on the subject whilst another Bush was in power and another Iraq war was commencing. Nothing changed, nothing learned as as we now gear up for another imminent and futile conflict, and wars are fought with drones (“hey Tommy, pull up G12”)  it is hard not to feel disappointed that those in charge have not learned a single thing in twenty years. “Go back to sleep, America”

One of the main things that becomes apparent whilst viewing these shows is just how masterful Hicks was on stage. Even if you disagree with some of the material you cannot deny he was an icon of stand-up stagecraft and delivery. Nothing was forced. There was no pandering to an audience. Hicks would insult an audience yet get them laughing. He would lean in to the front row, all sweat and sarcasm. He would use the stage like a musician, walking around, using the back and front end to great dramatic effect. Lines would be left hanging in the air, letting audiences digest them, giving them time to think about what it was he was trying to get across. His use of the microphone in these shows displays a skill that only someone who had been gigging since their teens would be able to achieve. Hicks was at home on stage. He OWNED whatever stage he was on and it would have been very difficult to have taken your eyes off this sweating, mullet-haired man all dressed in black.

This collection shows us what a truly wonderful comic Hicks was. He wasn’t perfect and it would have been interesting to see how we would have developed (would he still be relying on the same bits to this day or would he have created new material with increased regularity?) had he not died so young. What Hicks is is not just a comedian, he is a symbol. Like others who were taking too soon, he is now frozen in time. A manic with plenty of fury but someone who also saw the big picture. Someone as cynical as he was spiritual. Someone who proclaimed “our very lives depend on truth” and in these unsettling times never has that saying been more true. Remember everyone..it’s just a ride……

For more information on Bill Hicks visit this website