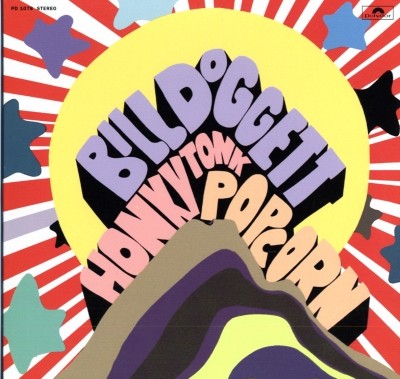 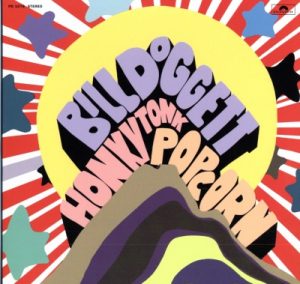 R&B organist Bill Doggett, reached #1 on the R&B chart and /#2 on the US Pop chart with his 1956 with his slinky, grooving instrumental ”ËœHonky Tonk’. Memorably featured decades later on the soundtrack to David Lynch’s 1986 film Blue Velvet, ”ËœHonky Tonk’ was a major hit for the King label.

Doggett reached the R&B Top 20 five more times. In 1960 he left King, signing to Warner Brothers, then with Columbia in 1962 and Sue Records in 1964. Meanwhile, King kept up a steady release schedule of Doggett records and he re-signed with them in 1965, staying for two years. 1969 saw him back again at King for another couple of years.

Doggett’s recordings from this period took two dissimilar paths: some were almost easy listening cuts, while others showed he was keeping up with contemporary musical trends. The most obvious example of this is his 1969 collaboration with the late, great James Brown and his JBs, siring the tight, funky and incredibly rhythmic 1969 single, ”ËœHonky Tonk Popcorn’. The B-side of the single was Doggett’s funk update of ”ËœHonky Tonk’.

King then gathered up a host of recent Doggett recordings to make Honky Tonk Popcorn, the 1969 album reissued here. It was labelled as a James Brown production but, other than the two single sides, it contained no cuts produced by Brown. However, the Doggett Honky Tonk Popcorn LP is a cult funk classic, featuring an enthralling mix of smokin’ instrumental grooves that effortlessly evoke wonderfully sleazynightclubs and juke joints. Doggett’s crazed ”ËœMad’ and a blistering version of Edwin Starr’s ”ËœTwenty Five Miles’ were deservedly released as singles.
Compiler Dean Rudland has found another great five tracks from the period to add to the album. Ashe notes, ”ËœBefore Lunch’ sounds like the finest record Booker T & the MGs never recorded, ”ËœShort Stack’ has a manic momentum, while ”ËœSome Kind Of Head’ carries the charge of every great Stax instrumental.

The other bonus tracks, ”ËœSassy B’ and ”ËœWet And Satisfied’, offer anintriguingglimpseinto the history of the mighty Funkadelic. In the time between recording Funkadelic’s first two seminal albums, the late, great guitarist Eddie Hazel and bass-player Billy Nelson left the George Clinton’s group. Nelson joined Doggett’s band for a short time. Until now Eddie Hazel’s contribution to a Bill Doggett session was unidentified. Yet the songwriting credits and the guitar style suggest that Hazel too was working alongside Nelson and Doggett. This is of course cause for great jubilation.

The only remaining mystery is why the ”ËœHonky Tonk Popcorn’ single and album did not send Doggett back to the top of the charts.