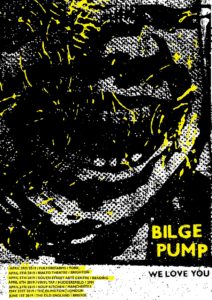 Louder Than War’s Ioan Humphreys gets a first watch of the new video from the mighty Bilge Pump.

Channelling both the original Evil Dead, and the early shorts of David Lynch (think ‘Grandmother’), Bilge Pump have produced a disquieting and unsettling video for the track ‘Manzana de la Discordia’ from their acclaimed LP reviewed here.

As well as their previous announced dates, they’ve added a few below: