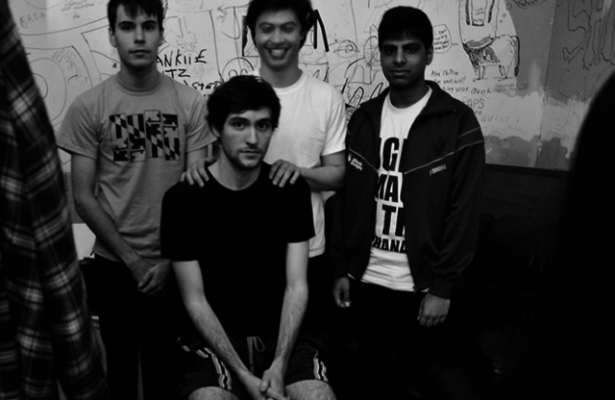 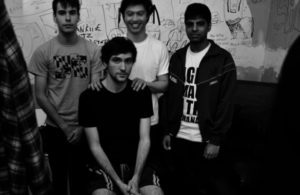 A cold wet miserable night in Brighton but a gig by up and coming American hardcore band, Big Ups, should be enough to entice anybody out in the bad weather. Louder Than War’s Simon Kvalheim reviews.

Bermuda Triangle is another new Brighton club situated right on the seafront. Inside it is like a cave and reminds me of a throwback to the days of The Roxy.

I arrive just in time for Brighton based Hardcore veterans Broker to take the stage and am straight away shocked by the fact that there are no more than 10 people in the crowd despite the fact there was another band on earlier. Broker play a short set during which vocalist / guitarist, Duncan Harrison catches the eye with his Tim Smith of The Cardiacs style mannerisms.

I can’t believe that when New York based hard core band, Big Ups hit the stage the crowd has swelled to just about 30 people. Big Ups released one of last years best albums in Eighteen Hours Of Static, an album that shows the US Hardcore scene is still alive, and this gig should of been a lot better attended. Part of a short five date tour to plug the album in this country it is a mystery why more people hadn’t turned up. Brighton should be ashamed.

Despite the no show crowd, Big ups hit the stage in fine style and proceed to cause musical mayhem for the next 30 minutes with a set mainly drawn from the album. Musically, it sounds as though the band have been heavily influenced by those giants of the US Hardcore scene, Jesus Lizard and Black Flag. Guitar player Carlos Salguero jr has certainly perfected his Greg Ginn chops and creates a superb noise ably backed by bass player, Amar Lai who keeps a throbbing pulse all set. This band know just when to switch from trash can speed to a big heavy, knuckle dragging riff

But the star of the show is vocalist Joe Galarraga who stalks the stage like a demented Iggy Pop wrapping himself in the microphone lead and walking into the small crowd as well as using any props available for leaning or swinging. All the while Mr Galarraga maintains his singing/ screaming and on this showing could well develop into one of the Punk stars of the near future.

Highlights of the short set were the latest single, Goes Black, a superb slice of hardcore that in the perfect world would be a massive hit. Tunes don’t sound this dirty, unstable and physical anymore. Also Body Parts and TMI keep the incessant riffs going.

After just over 30 minutes Big Ups leave the stage and as is becoming de riguer there is no encore. With any luck the band will cause some lasting damage to the Punk scene and I look forward to what they do next.

But as for the tiny crowd. The 30 hardy souls that watched this gig will hopefully one day be able to recount their story as Big Ups play a sold out show at a much bigger venue. Brighton, you don’t know what you missed.

All words by Simon Kvalheim whose Louder Than War archive is here.