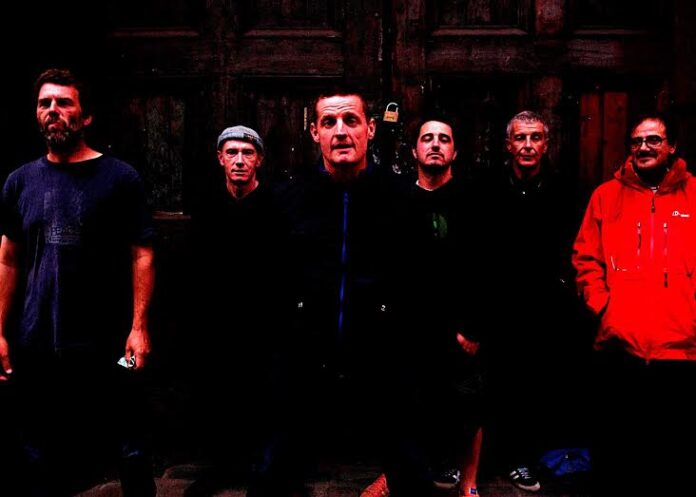 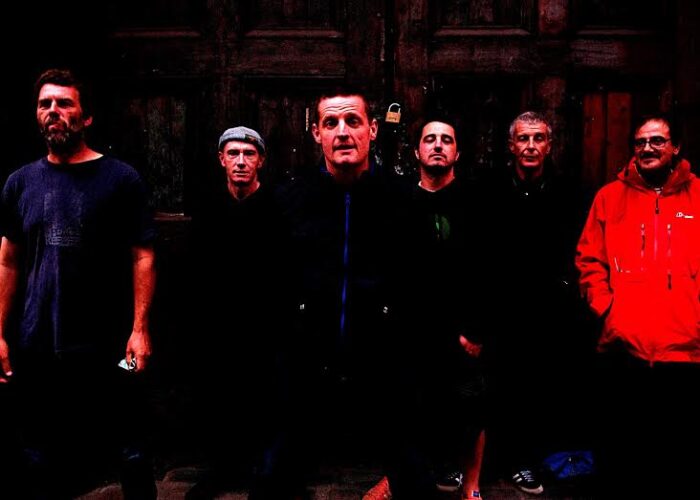 Big Unit talk to Louder Than War on upcoming debut album; ‘Big in The Game’

​
Bona-fide Manchester super-group Big Unit are coming your way and are on course to release their eagerly awaited debut album ‘Big In The Game’, so LTW caught up with some of the band members for their thoughts and feelings as they finish up recording and look to its release. The self proclaimed acid rock 6-piece are fronted by 808 state member Darren Partington, Ben Knott on Keyboards (Happy Mondays) former Fall & Ian Brown drummer ‘Funky Si Wolstencroft’. Big Unit also consist of Chris Wilkinson and Ian Wilde on guitar as well as Rouffy on percussion. Here LTW talk to Ian Wild aka ‘East’, Ben and Funky Si on putting the album together (which includes the all ready acclaimed tune ‘Gio Goi’, a real banger), their influences, experiences and how the band came together, plus a look ahead to their Salford/Manchester show this coming Halloween – its all here.

Hi Lads, first off what’s happening in the world of Big Unit right now, and how close are you to finishing the debut album ‘Big in The Game’

East: Its good to be here, it’s good to talk.

Darren: At the moment we are hard at work on the album Big in the Game. The title comes from sayings from the 0161, most of the vibe off the music comes from friends and people we know in that what people say makes the best song ideas.

Can you give us a taster, a description of the whole sound and vibe of the album?

East: The sound of the album is Acid House Rock n Roll, like the live set only transmogrified. There are so many people in the band with so many different influences its hard to know where to start. Personally I’m into Sergio Mendes, The Clash, Devo, Skatalites, Major Lance, Artie Shaw, Arthur Lee and The B52s.

Ben: For my part I’m trying to capture the spirit of some of the greatest gigs I’ve seen like Big Audio Dynamite, Beastie boys , Iggy pop, Gary Clail with Tackhead, Orbital at Glastonbury and of course the Mondays and Black Grape.
What would you name as maybe some of the albums stand-out tracks?

Ben: ‘Skin Deep’ is my current favourite of our songs ,a tattooists anthem. And ‘Personally Yours’ with the words “fresh faced females no beards please, into kung fu fondue skiffle and pilates ,tight cheeked hunks in ladies trunks seeks discos and frisbees and hindus in pumps “And ACID ROCK describes itself.

Darren: The taste of the album is real holds no boundaries, its from the heart songs about ,self harm,domestic violence ,love ,hate, struggle,and last but not least staying out all night ,things we been working hard on for years. I’m into Dirty disco ,Disco Pimps ,Soul Wax , .there s a lot of fresh Dirty bass-line tracks that I’m putting into my DJ set , my favourite at the mo is Hardfloor ,one of the best re-mixers around,they are going to remix cubic for 808 State. I met them in Tokyo last year ,and it turns out they re fans of us , as we are of them .

‘Cross My Heart’ features an outstanding vocal from Rowetta, a real uplifting summer type of tune which runs with a real classic Peter Hook bass-line, completed with some fine vocals from Darren it sounds like one of the albums highlights?

East: Rowetta is outstanding as always, what a voice. Hooky’s played a great line and it is so Hooky, reminds me of ‘The Perfect Kiss’ which is one of my favourite Hooky/New Order baselines, really distinctive. I’m glad you got on to Darren’s vocal ‘cos its a good one and often gets overlooked.

Darren: Cross my Heart, sampled Downton Abbey ,cause it kinda works in my head like Verves Bitter Sweet Symphony needed a bass player so got one of the best in Hooky he smashed it in the studio. Then Rowetta was needed no one else could do the job better she was my first choice and best girl for the job love her to bits and she put down a great performance the Big Unit line up reads for its self its like this, cover yourself with greatness and the rest is easy.

What’s the album title referencing, ‘Big in The Game’…where did it come from and what are the kinda things the band write about, cover in the songs?

East: Big in The Game is a Bernard Manning catchphrase. Darren’s first gig as a scratch/hip hop DJ was at his local nightspot ‘Bernard Manning’s World Famous Embassy Club’. Bernard told him to “stick with it,son,you’ll be Big in The Game”. Nearly all the lyrics are Darren’s so I don’t know what they’re about, they’re usually funny though.

Love the tune ‘Gio Goi’, probably my own favourite Big Unit song, is it on the album?

East: I hope so too, we had a great time shooting the video with Anthony and Chris at the old Gio Goi HQ. I’m not sure about that buffalo hat though.

Darren: The Gio Goi track we did came about when i saw Chris Donnelly at Kendal Calling and said, I’m gonna write song about you and your kid. He just looked at me and smiled top kid Chris. Was a bit nervous playing it to them for the first time, you know how Anthony can be, but thank fuck they both liked it. As it says in the song, this kind sums them both up perfectly. From 88 to the present day perfectly stirring it up front centre the Donnelly’s going all the way built on pure passion tearing arse out of high street fashion brotherly love taken to the extreme. Acid house one love we living the dream so that’s what we up to its all about ,eat drink rehearse write party.
‘Cross My Heart’
https://youtu.be/5aYa0oBWC3g

So how did Big Unit actually come together, its a real interesting line up which has so much going on musically between you all, a wealth of sounds and styles. Darren from 808-State, Ben who played with The Mondays & between Si and Ian there’s the Ian Brown/Stone Roses connections, that’s as well as what Chris/guitar and Rouffy/percussion bring to the mix?

East: Me and B have known each other a long time. I first met Darren and Rouffy when I did sound for 808 State. I worked with Si on a tour with The Fall for the Frenz Experiment, I don’t think we remember each other, he’s wrote a book you know.

Ben: Darren started it all off . He came up to me in Ancoats with a book full of lyrics and and a good idea how they should sound . We work well together with east coming up with great guitar riffs and me putting in loops and funny noises. Then we all get into it as a band. I think its live where we really come to life . There s a lot of energy from the perfect mix of people.

Do some of you remember each other from back in the day when you were all with your original bands, back in the days of Madchester, is it a laugh when you look back at the times?

East: Me and Ben used to share a house in Chorlton, Madchester era, with Mark Coyle (Oasis producer). It was kind of Party Central, Mani used to turn up at 4 in the morning to relieve us of our cash at the drug fuelled ‘Frustration’ tables, he’s king of the ‘Popomatic’ . Then Noel Gallagher would turn up to show us his latest shoes. I liked it.

Ben: I remember meeting Daz with 808 state in New York at the new music Seminar in 1989. I was roadying for the Happy Mondays, Deelite were playing the same venue the night after .He was still a teenager then I think. A dream job that was .

In fact drummer Si Wolstencroft put his memoirs in his recent bio which made a great read…for the last few years now Manchester has really celebrated the late 80’s, early 90’s, what’s your thoughts on it all?

EAST: I get a bit bored with the nostalgia, it was really great but that was then, and this is now, and I’m waiting to see what tomorrow brings. Si’s got a great story to tell.

Plans for the rest of the year. how about your next show?

Darren:New album just being finished so from now till end this year we keepin our heads down and grafting like mad. So watch this space the unit are coming very soon to a town near you. one love Big Unit.
Before you go…what’s the best thing about being in Big Unit?

East: It feels a bit like being a teenager only older, and its good to be with your mates in a Big Bad World.

Ben: Its ours we can do what we like with it, just need to share it with the world now.
interviewed by Carl Stanley –