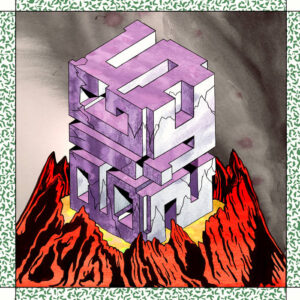 Big Syn are an alternative rock band straight out of Chicago. This eight track album out now is their first ever release and the band is planning a visit to Europe in the autumn to promote their wares. Ioan Humphreys reviews for Louder Than War.

What is immediate from the first track Nice To Know Your Face is that the band take their production VERY seriously and like their big sounds. Tribal drums welcome in gentle riffs that are quite ethereal. The refrain of “you know you make me shake, shake, shake” is catchy and again the big sound they go for with the euphoric chorus reminds me of the scale of U2 in a way?

Leave No trace has a really nice squelchy riff that launches into a track that has a great rhythm and insistent drums. Again it has a BIG chorus and is melodic and almost funky in its execution.

Nightwalk has again a nice gentle arpeggio guitar beginning. The track is slow and with the heartfelt vocals, it ebbs and flows beautifully. The noise that creeps in to the song feels almost malevolent. But this can’t take way from its overall sumptuousness.

The bombastic keyboards and almost organic throbbing electronic riffs drive Physical System. It has a great beat running throughout and is a really infectious song!

Title track, It’s Awake, starts off with a fantastic noisy riff and frantic drums. This song takes you places you never thought this band could! It’s noisy, dramatic, and very unpredictable. In fact half way through it comes to near complete stop and starts up again as a completely different song! But it works so well and is very clever. I think Big Syn are having a bit of a play about and at the moment it works!

The final track ‘It all means nothing anyway’ is an epic track, more than seven minutes long. It has a really poppy, and again, an almost funky sound that is another rollercoaster of pained vocals and lyrics that tug at this miserable forty something’s heartstrings! What I most like is the noisy guitar/keyboard freak-out at the end of the track that feels almost joyous in its execution.

I love bands that love making noise and Big Syn know how to do that when it’s necessary, combined with big sounds and production and great song structures. I’m looking forward to hearing more from Big Syn in the future.

Big Syn can be found on their Website and their Bandcamp