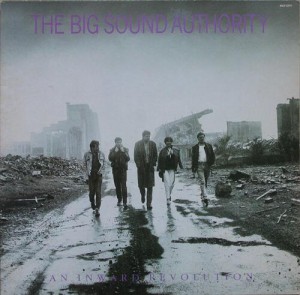 If you’re a child of the 80s you might remember The Big Sound Authority. A refreshing brand of pop-soul that graced the airwaves with the superb This House (Is Where Your Love Stands) and popped up on TV shows from The Tube to Wogan, from (the final) Old Grey Whistle Test to No.73 (Google it kids!).

The formation of the band is well known, with both singer Julie Hadwen and songwriter Tony Burke being introduced to each other after an ad was placed in Smash Hits by Paul Weller calling for artists to sing vocals with The Jam. The pair went on to form the band and contributed History Of The World to Weller’s Respond Records sampler album, they then turned down a contract instead taking up an offer from MCA.

An Inward Revolution spawned three singles – This House was the only one to grace the Top 40 and missed out on the Top 20 by just one place, A Bad Town and Moving Heaven And Earth. The album unfortunately proved to be the band’s first and last which was followed by a fourth single Don’t Let Our Love Start A War which again failed to chart.

It’s fair to say that the full potential of the band was never achieved. Critically acclaimed, they employed the skills of a string of top producers which included Tony Visconti and Robin Millar, recorded sessions for Radio 1, and performed at the Montreux Jazz Festival. Despite all this they never reached the commercial success that they so richly and rightly deserved.

A Bad Town kicks off the album and how it was never a hit single is a mystery, perhaps it was the left wing lyrics and ideals which featured highly. It was one of the most energetic singles of the time and focused on the vocals of Burke and Hadwen with a strong chorus and superb brass section. It also expanded the single version by a minute and a half with a brilliant instrumental segue.

The Big Sound Authority weren’t just about high powered anthems though, their ability to craft some lovely ballads and torch songs had to be applauded and slotting in Loverama as the second track was a master stroke.

30 years since its original release it’s actually difficult to believe that there were only three singles lifted from the album, the reason probably being an affectionate over-familiarity – it was played over and over and over. When Things Fall Apart is sheer poetry.

Both vocalists possessed a gritty, almost harsh voice which only added to the muscle of the backing and My Hell Shaped Room showcases Hadwen’s remarkable voice with aplomb. (Call Me) Soul Man was another brassy affair begging for single release.

Now released for the first time CD, the album features all the band’s output including additional single versions, 12” mixes and B-sides. Sure, there are several versions of some songs but the inclusion of Mother Help Us All, History Of The World and Somebody Up There Likes Her confirms that the band weren’t one trick ponies and could have gone on to much greater things.

An Inward Revolution is one of those forgotten gems, but with this re-release maybe a discerning pop audience will give it one more try.