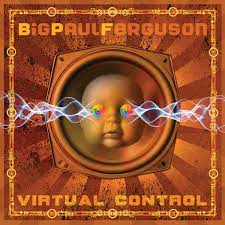 Big Paul Ferguson: Virtual Control: With its powerful drums, insidious grooves, intelligent prophetic lyrics, disco-topian, dystopian grooves, subtlety dark melodies and a sense of adventure – this is a surprise package of an album. With themes reflecting on these chaotic times, the overload of information, the string pulling power of the internet and the tsunami information overload that he senses is turning us into ‘marionettes’ this is an album that holds up a mirror and hammer to these digitally gonzoid times.

Taking time out from the Killing Joke mothership during the enforced lockdown, the group’s drummer Paul Ferguson has delivered a powerful work that is very much from his band’s ilk – but also very much his own interpretation of their inventive and influential brilliance – a brilliance that he is at the core of.

Just what is this thing called Killing Joke?

The monolithic band have few peers and give away few clues about their modus operandi. We know that the combined power of the four founder and key members brings the voodoo down like no other and we know that some of them have extra circular activities like singer Jaz Coleman’s adventures into classical music, and bassist, Youth becoming one of the world’s biggest producers, whilst guitar player Geordie locks himself up in his Prague bolt hole stockpiling iconic, dystopian guitar riffs – but what of drummer Paul Ferguson? We know that he makes scary looking jewellery and we also know that his muse and powerhouse rhythms are a key component and part of the Killing Joke dark energy.

We already knew that he was the founder member of the band and brought the ritual magic they are known for into the mix. He was a High Wycombe punk rock kid who went to London in 1977 and lit the fuse for this most fascinating of bands and his powerful drums brought terror and rhythm in equal parts to the table plus his skill at lyric writing that is key to many of the band’s iconoclastic songs.

This debut solo album underlines all this and gives clues to the heart and soul of group. Of course the drums are key here – he is one of the great post punk rhythm machines and they are pounding and inventive in all their tribal glory underlined by by Mark Gemini  (MGT/Peter Murphy/The Mission) supple and muscular co-production and co-writes that allow the powerful songs to breath and leave space for the guest appearances from former Marilyn Manson/KDFDM band member Tim Skold as well as Die Krupps mastermind Jürgen Engler.

Produced with a clarity that adds to the power it allows the many moods and styles to work as a combined whole. There are many styles being played with here from the tom tom tsunami to pile-driving death disco to atmospheric playing with rhythm and space. If it was just an album made up of drums it would be great but the songs are multi layered and well thought out adventures into grinding grooves and coated with a dark matter melody. Paul’s sinister voice is highly effective in getting the dystopian message over without shouting it down your ear hole and there are layers of carefully constructed sound that pull you in.

It’s a great album that makes for an engaging adventure. It toys with the form that Ferguson helped to invent and puts its own stamp on the darker side of post punk. The sense of space and drama adds to the music’s presence and the grooves connect with a delirium dance floor.

Typical of the albums pounding propulsive tracks is lead single Extrapolate, that combines the muscular drumming with the electronics and hypnotic lead vocal. Paul Ferguson explains the song as “My reflections on the dichotomies, social and personal, of these times. How our lives are being affected by isolation coupled with the bombardment of conflicting information. Our trust in what is real and true being challenged on a daily basis.”

A thrilling and and rhythmic adventure that serves the songs perfectly, this a bulletin from a post industrial future and a well observed missive from a world gone mad from one of the darkest of dark horses from a band whose proclamations of dystopia were once seen as wild eyed lunacy and now sound like day to day headlines.

It’s also an album to get immersed in and works equally as well as pounding cinematic sound track like the brooding film score that Hans Zimmer has always wanted to make – the wild skies, seething sturm and drang and swilling exhilaration of dark times turned into a killer album from a Killing Joke.