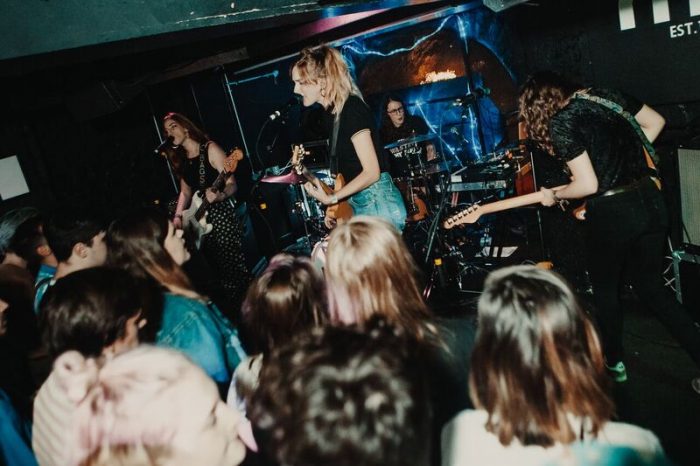 Sunday being the day of unrest, Louder Than War’s Jon Kean sacrificed his viewing of Countryfile, The Antiques Roadshow and Strictly’s results show to sing and sweat along with The Big Moon at a sold-out Moles Club in Bath.

In my book, anything or anyone referring to themselves as ‘big’ makes an overt commitment not to be disappointing. If that act then records a song promoting the lyric “I’ll be formidable,” then they’d better be bloody good. If I’m going to have a late one on a Sunday and be more useless than ever in my workplace on Monday morning, I need the post-show euphoria to outweigh my colleagues’ disdain for my vagueness and ineptitude.

Suffice to say that by ten pm on Sunday night, I was exhilarated and unwilling to recognise that Monday morning even existed.

This tour must be the last time The Big Moon aren’t selling out huge venues. Moles’ subterranean, vaulted performance space is tightly-packed and atmospheric. From the stage, you could easily brain yourself on the central ceiling joist or the high-mounted foldback speakers with an excited performer’s leap. When band leader, Juliette Jackson, recommended a moshpit at the start of Eureka Moment, it nearly bounced up onto the stage with her. When she took the mic down into the crowd on Bonfire, she did well to escape again from the frenzy that she herself had whipped up.

It was a privilege to be so close and personal with the performers. When a band smiles as much as The Big Moon do on stage, it’s a joy to see. In such circumstances, it’s worth checking briefly whether the audience is having as much fun as the band. We certainly were. 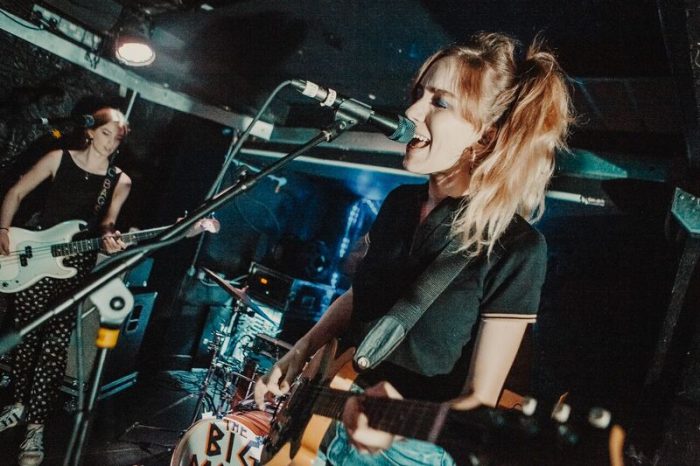 Credit to Moles’ crowd for supporting the support. The night began with Bath University-based Feuerhaus. The healthy size of the early-evening crowd was well-deserved and hugely appreciative of their burly, vigorous, energetic sound – like caffeinated shoegaze. T. Rex Hands provided their high point. Get Inuit brought tightly-arranged, tornado songs and loose, tumbleweed banter. With dynamically fizzy tracks to irritate the hell out of your parents, such as Teriyaki and Barbiturates, the music (fortunately) predominated.

The headline set began with Susie, which immediately showed the threefold vocal strength of The Big Moon, Juliette Jacklin’s vocals cresting the wave of guitarist Soph Nathann and bassist Celia Archer’s equally resplendent tones. Masters of the false finish (Nothing Without You) and periods of intense quiet to contrast with their raucous indie-rock (Hold This), they treat you to a thoughtful variety of sounds.

They encouraged us in a rousing ‘hairbrush in front of the bedroom mirror’ singalong to Bonnie Tyler’s, Total Eclipse Of The Heart. Once we’d been praised for being the best singers on the whole tour (honest, guv’nor), we just kept singing, to the eminently join-in-able Cupid and the anthemic, yell-worthy Formidable.

The Big Moon can be subtle and sparkling, but equally they just blow the bloody doors off sometimes. Set closer, Sucker, escalated into a thrilling shredfest and ended with our attempt to reciprocate its volume in cheers. Far from calling it a night, the vast majority of the crowd moved upstairs and formed a surprisingly orderly queue at the merch stand.

Superstition has it that the moon governs madness, and the fuller the moon, the greater the lunacy. If that isn’t the backstory to The Big Moon taking their name, then it should be. It certainly explains the reaction to their stellar live show.

Photos by James Burwell at Soul Media. You can also find Soul Media on Facebook.