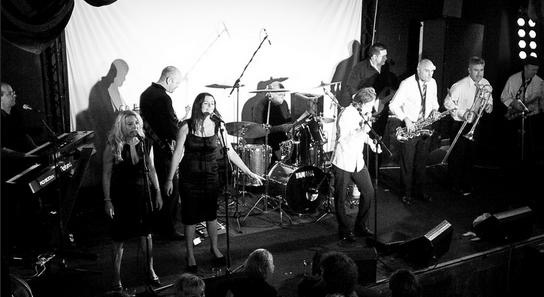 Louder Than War’s Nick Fisk catches Big Mac’s Wholly Soul Band for an evening of soul classics, resulting in him feeling like he probably should have seen them sooner.

There’s something life-affirming about tonight. We may be specks of dust on a chunk of rock spinning around in a seemingly meaningless way, but when people come together for this band, somehow it’s as if sense is made of the world after all, if only for the duration of the gig.

Big Mac’s Wholly Soul Band have been treading the boards for some time now. And with it being such a large band, you’d think a lot of those boards must have been worn right down. They’ve been known to play in pubs and clubs the length and breadth of Cardiff, including pubs near to this very venue, like the Claude. Have always meant to catch them, but somehow never did, and as a result, this was my first time.

I always thought The Regular Fries would have made a good support act. In terms of musical styles, the two bands are like chalk and cheese, but then again, if you think about it, a hamburger and a potato chip are not really similar food stuffs, but are great as a combination. But the London baggy propagandists split up some time ago, while Big Mac has just carried on.

The name of the band pretty much gives it away in terms of which genre Big Mac’s fit into – unapologetically in the style of The Commitments (though they actually began before the film came out, and have even supported the band), this is a great, big band, playing all the soul classics you might expect to hear, but in such a smooth, polished style that they can rightfully claim to be the best in South Wales – it would be a brave effort to try to steal this band’s mantle.

They have the look, the sound, the lot. Dressed smartly in black, there is a proper feel of professionalism, with just that little bit of gangster-chic thrown in for good measure, with the heavies on the right on the brass, the ladies on the left on backing vocals, and Mike “Big Mac” McNamara himself, proudly centre stage, with something of the look of Al Pacino about him.

He has a fantastic voice, with a great range, which he can vary according to which song he’s covering – he can be deep and gravelly at one point, but then switch to softer and smoother, but all the while, extremely strong and confident – he’s a great leader, always with a smile.

It’s hard to say which are my favourite songs of the set, they do them all so well. “Mustang Sally” is definitely one that seems popular with everyone; I’ve always liked “Build Me Up, Buttercup” for some reason. We have two whole sets of all the greats, plus an encore, so value for money is never in doubt.

When it’s done right, I guess it goes without saying that soul music is good for the soul, and Big Mac’s Wholly Soul Band are proof positive of this. This gig was a sell-out, and there will be many people greatly looking forward to seeing them again in a few months for their 25th anniversary in Newport.

All words by Nick Fisk. More from Nick can be found at his Author Archive.