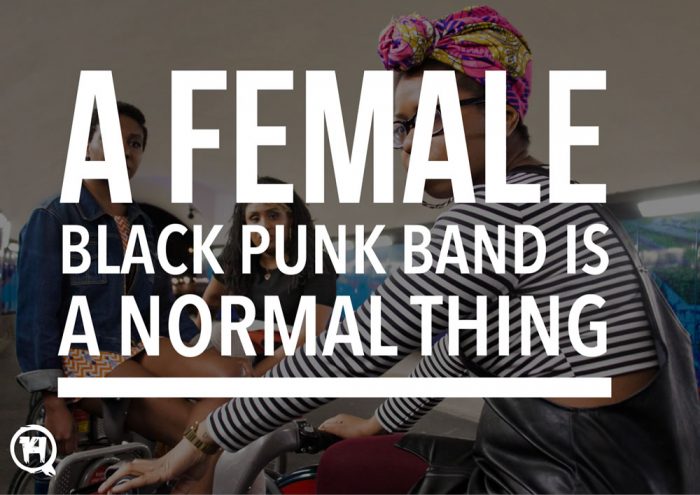 An interview with Big Joanie

This interview first appeared in 14hq

Louder Than War recently ran a feature written by Samuel Lambeth entitled “We Need To Stop Using ‘Female Fronted‘ as a genre. It was one of the most read articles on the website receiving over 1400 shares on Facebook and has been nominated for an award from The British Association of Journalists.

“To summarise, referring to a band with a woman in the position of lead singer as ‘female-fronted’ suggests the default setting of a musician is male. That we should gawp in shock when a girl takes to the stage and that we must have a specific name for it in order to exaggerate every angle and every release.”
Sam Lambeth

The full article is here.

Here to hammer this message home loud and clear we have Big Joanie, a three-piece punk band from London. Proving that a band consisting of 3 females, all people of colour, have always had a place in popular culture. As they clearly state ‘A Female Black Punk Band is a Normal Thing!

I have added a link to their latest single at the bottom of this interview – slightly jazzy they remind me of the naivete of Aerosol Burns era Essential Logic (Laura Logic’s spinoff band from X-Ray Spex) and The Slits. I’d be interested in your opinions in the comment section of this piece.

One of the most exciting upcoming artists in Punk music is Big Joanie. A London based band, consisting of 3 black females. They have gigged all over the United Kingdom, appeared in national and worldwide music publications, with one main goal: to remind the world that People of Colour have always had a place in Punk music. I spoke to the band’s lead singer, Stephanie Phillips, about everything from her growing up around Punk music, how the band was formed, the transformation of Punk music over time and what Big Joanie has planned for the future.

Growing up in Wolves, what was the music scene like?

It’s a small city. There’s a small music scene, not as dynamic as London. Plus, I was too shy in Wolves. I left when I was 18 and come to London. There is much more awareness of music in London.

Have you always been to punk music? Was it what you grew up listening too?

More or less. I started off as a kid listening to Aaliyah and Destiny’s Child. I then really started getting into female fronted bands.

Yeah Yeah Yeahs, Bratmobile, PJ Harvey. Women who would be expressing emotions. The music taught me a lot about feminism and politics, which is something I needed to learn as a 16 year old girl. But all 3 of us do really love punk. We all love 60’s girl groups and Motown music.

How did yourself, Chardine and Estella meet and create Big Joanie?

Well, I was living in London. I was in a punk band called My Therapist Says Hot Damn. We just used to gig. There was a gig called ‘First Timers’. The point of the gig is to have bands that do something new and unique. It encourages marginalised people to get involved and do things they may usually not. After that, I wanted to start another band. I wanted to start a black punk band. Literally, I put it on Facebook. Chardine got back to me straight away. We had a bassist, but she moved to Glasgow. Then Estella stepped in. She can play everything. Drums, guitar, bass. Everything 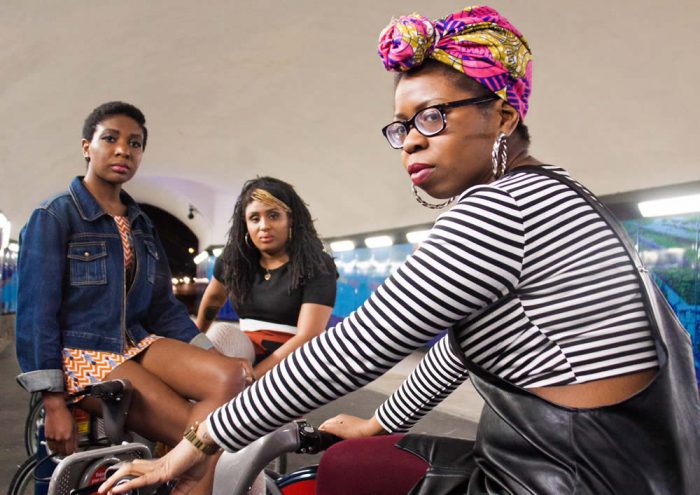 Did it take you guys a while to find your sound or was it something that clicked from the beginning?

It actually worked well from the beginning. I already had a few songs I had written. We clicked immediately. I think that’s why it works so well, because it’s never really been too hard for us. We complement each other, both in the sound we want and the things we want to achieve.

Big Joanie’s songs are very passionate, often with deep meanings. What are some topics or themes you guys plan to discuss in future?

Usually when we write, I’ll come up with the basis of the song, but it is generally whatever is going around. Relationships, friendships, how it feels to be a black woman in the society that we are in. We have one song coming out that deals with people who fetishize black people. You know them people who say ‘I have one black friend’.

Big Joanie makes known that People of Colour have always been a part of Punk and Rock and Roll culture. Do you think this is something that has been forgotten over time?

Definitely. I think it has definitely been forgotten. For a number of reasons too. The people that write history are more invested in creating an illusion that makes them feel bigger than they actually are. Throughout history, Punk and Rock and Roll is influenced by black culture. Even the people who went too gigs, took the photos, documented everything; they were black. The idea that it is just white people is ridiculous. Black people themselves do it too. We get stuck in investing in music that’s slick and well produced like R&B. We as black people don’t appreciate that creating Punk music takes hard work too.

Is that the aim of Big Joanie? To let everyone know that People of Colour and Punk have always gone together.

Think back to the 1970’s. There would have been loads of black female punk rock bands. We think beyond what you see. A female black punk rock band is a normal thing.

Big Joanie has performed Boiler Room sets and festivals like Supersonic. What was the reception like from people in attendance?

Generally a good reception. It’s nice to play those different gigs because it’s not necessarily our audience. It’s nice to introduce ourselves to new people. I do sometimes get nervous before were about to go on stage, but once you’re out there, you get into the zone and don’t even know what’s happening. You just want to give as good a performance as you can. It’s nice to do gigs outside London. 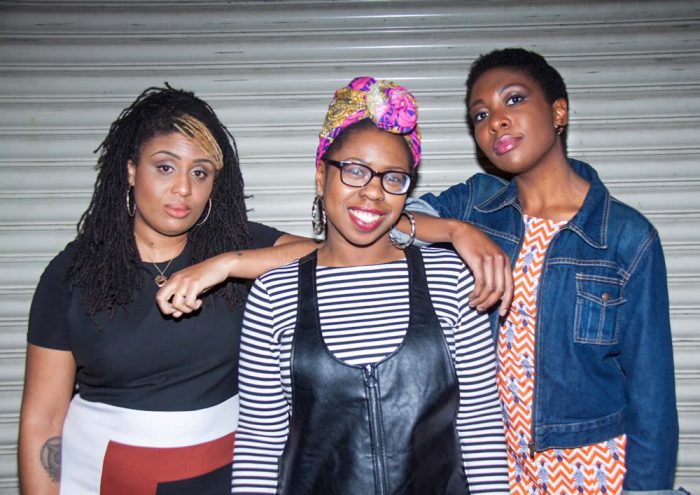 The audience is always really enthusiastic. Outside of London people are more likely to sing along and show what they are really thinking, in my experience.

Do you have artists that you currently listen to for inspiration?

Who are some artists that you would love to work with one day?

There’s so many people. It’s all about who you would complement. I love Sacred Pause, they’re a band from Glasgow. FKA Twigs. Erykah Badu. I’m not sure she would need my help with song writing though.

You guys were listed as one of The FADER’s 15 artists to look out for in 2018. What was it like to see yourself on a list like that?

Really nice. We have never really been on a list or anything where people are expecting us to live up to a hype.

What are some goals that Big Joanie have set for 2018?

Do we have a name?

Untitled as of now. But soon it will be about. Were just thinking about last minute things. We want to tour more, go to Europe hopefully. We want to make a name for ourselves. Make sure that people know what we are doing. Let people know about us. Have fun.

Is having fun while doing all this important for you?

It is. This is something that I have always wanted to do, but never had the confidence to do it. I am serious when needed. I think about the image I would want the 16 year old me to see. 3 black women who are strong enough to rebel against society. Were outside the norm of now were expected to act.

You seem to be a passionate person, do you do anything outside of making music?

I’m also a journalist. Music features, culture features. I’ve written for Noisey and Bandcamp. There’s a festival we do that celebrates People of Colour in Punk music.

Thanks to 14HQ and Karan Teli for allowing us to publish this interview.