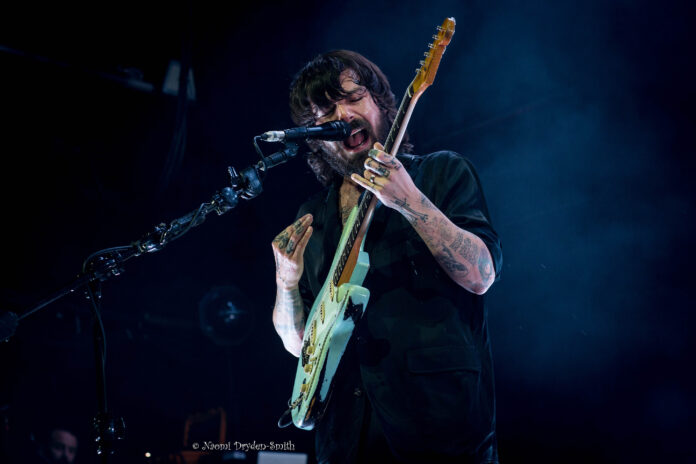 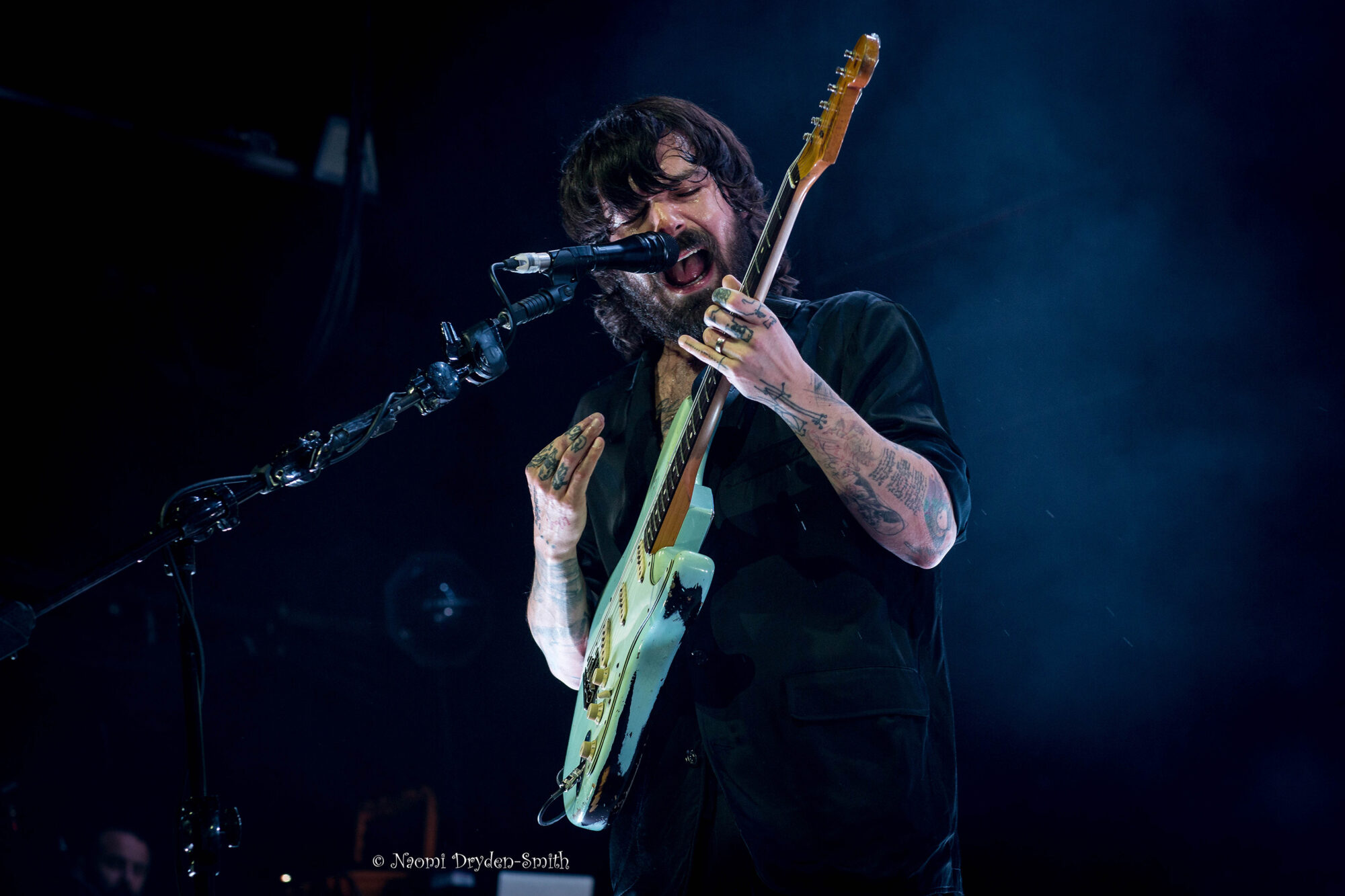 Phil Ross is tempted out of his cave by LTW’s Naomi Dryden Smith, only to be schooled in commitment by Biffy Clyro

I’m a terrible procrastinator. There’s a band playing tonight, a band I have no knowledge of. I couldn’t tell you a tune of theirs unless you gave me a multiple choice questionnaire, and even then it would be a game of chance as to whether I could name one. I have a random memory of a mate of mine calling them ‘corporate rock pants’, but I’m not sure.

On my to do list, there are several urgent household repairs, some imminent deadlines for articles I’m writing and my agent has asked me to make a self tape for the part of a salesman in a car commercial. And perhaps most pressingly of all, I’ve run out of coffee. 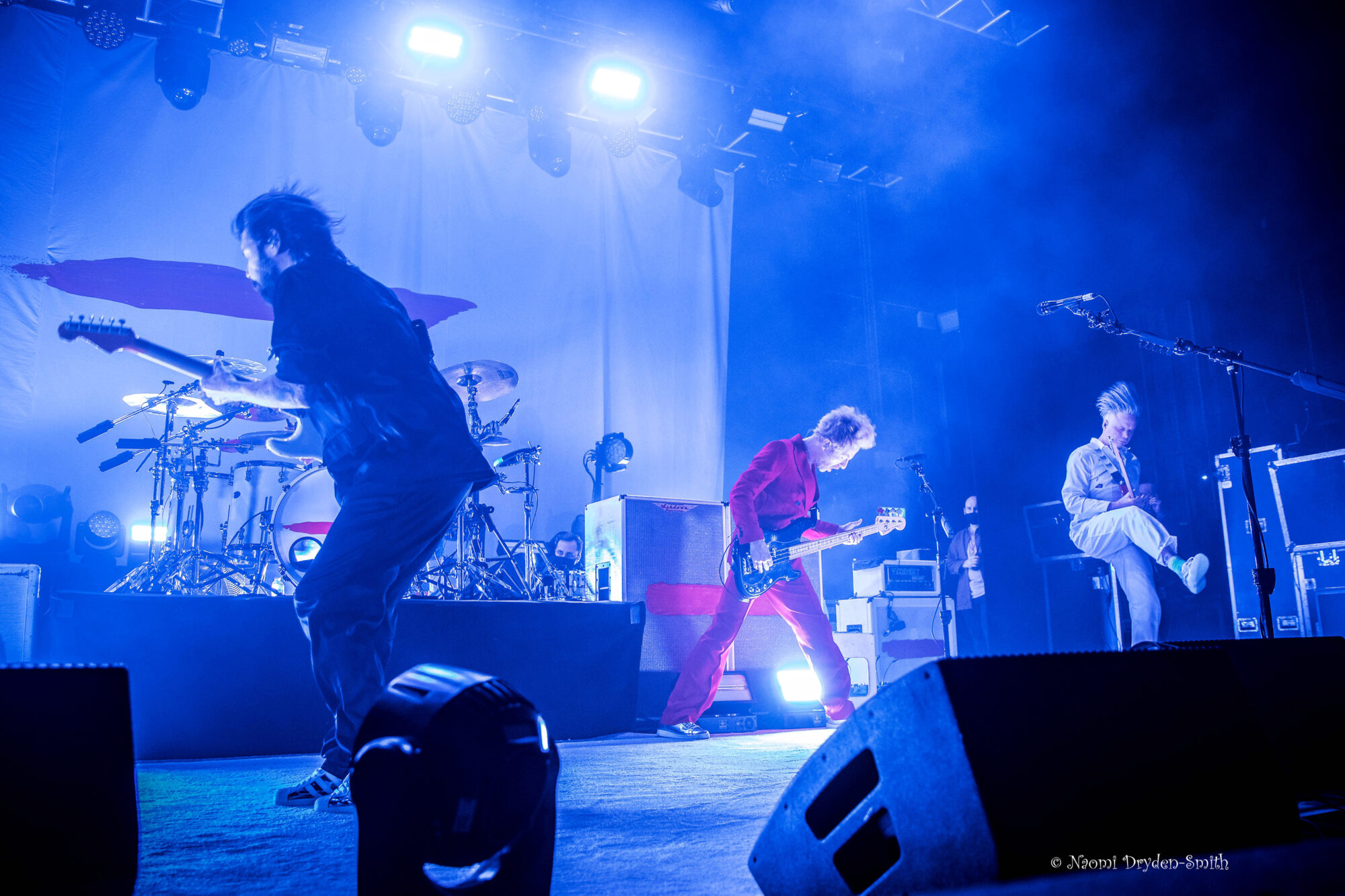 So naturally, it’s a complete no-brainer when I’m notified at 14.05 by the familiar ping that I have a Facebook message to attend to, asking me if by any chance I was free this evening to review Biffy Clyro at the Forum in Kentish Town.

There’s no need for me to take even the quickest of glances at the to do list, I know there’s more on it than any one person could possibly tackle in any one afternoon. I can get a train direct from Tulse Hill to Kentish Town station which is about 30 seconds walk from the venue. And I can pick up coffee on the way home. Perfect. 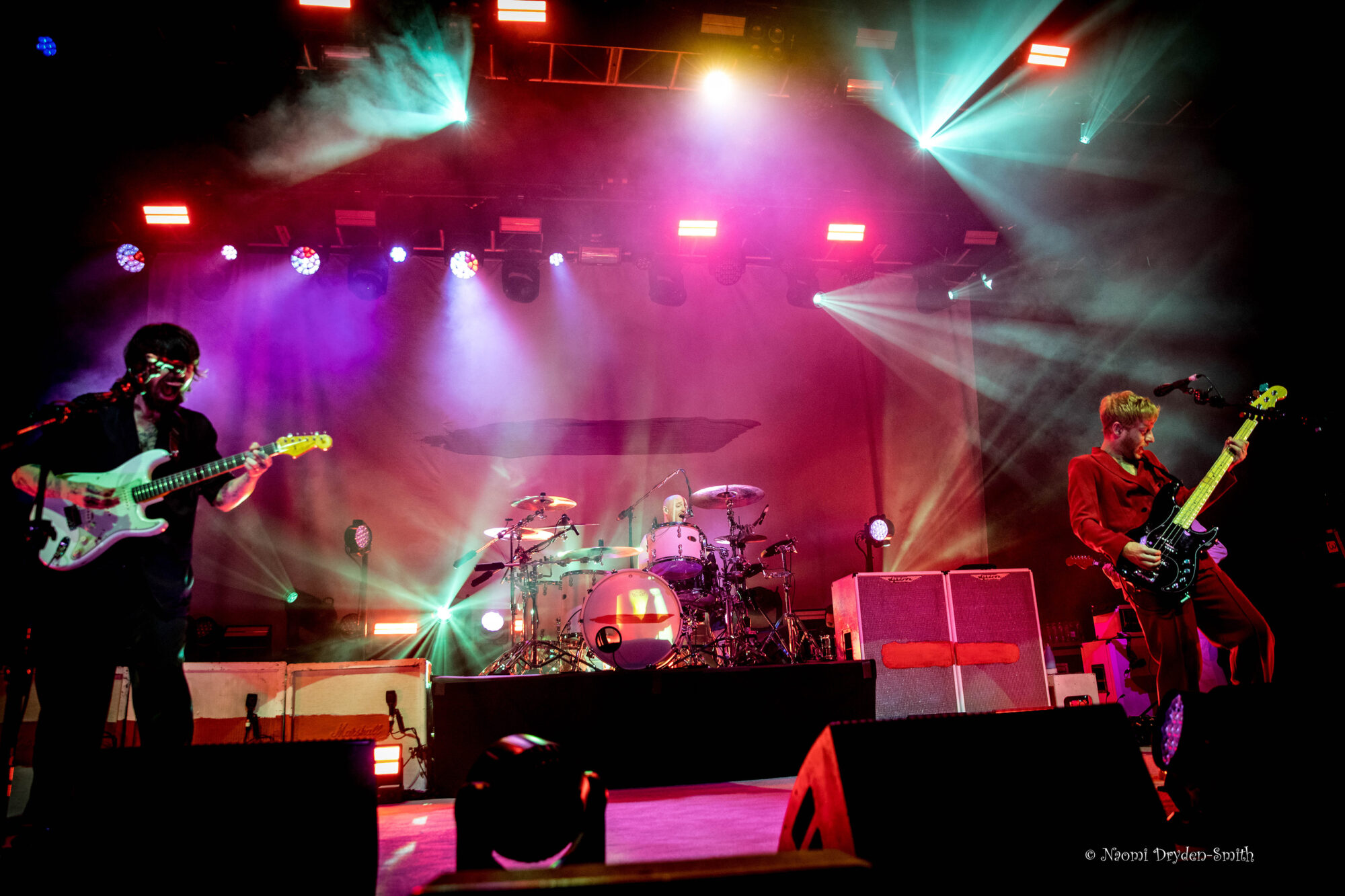 I love The Forum, it has one of the most beautiful interiors of any live music venue I know with art deco Roman battle scenes, columns and eagles adorning the walls. Rumours abound that the venue, built in 1934 was funded (along with other London venues) by Mussolini as a sweetener to help garner support for Oswald Mosley’s British Union of Fascists and/or to encourage the Irish Community (who would undertake the building work) to support the Axis powers against The British Empire in any forthcoming war. Mosely did in fact organise a march from Kentish Town to Trafalgar Square in 1937, so who knows, urban myth or not?

Fast forward the short ninety or so years, and yes of course, once again we must gird our loins against the evils of fascicm. But more specifically; tonight, and I’m pushing my way through the crowd and perch on a security barrier down the right hand side of the hall, near the front. The Biffy intro music is classic, ethereal and haunting. Smoke bellows from the stage over the crowded dance floor, like a winter mist rolling in over the Ayrshire coast from The Irish Sea.

A great wash of red light engulfs the room and The Biffy take to stage, a huge cheer erupts like a volcano has taken up residence in The Forum. The delicate and evocative introduction to Dum Dum discharges into ‘This is how we fuck it from the start’ and like the memorable ‘You had me at hello’ line from Jerry MacGuire, The Biffy had me at ‘Fuck it from the start’. 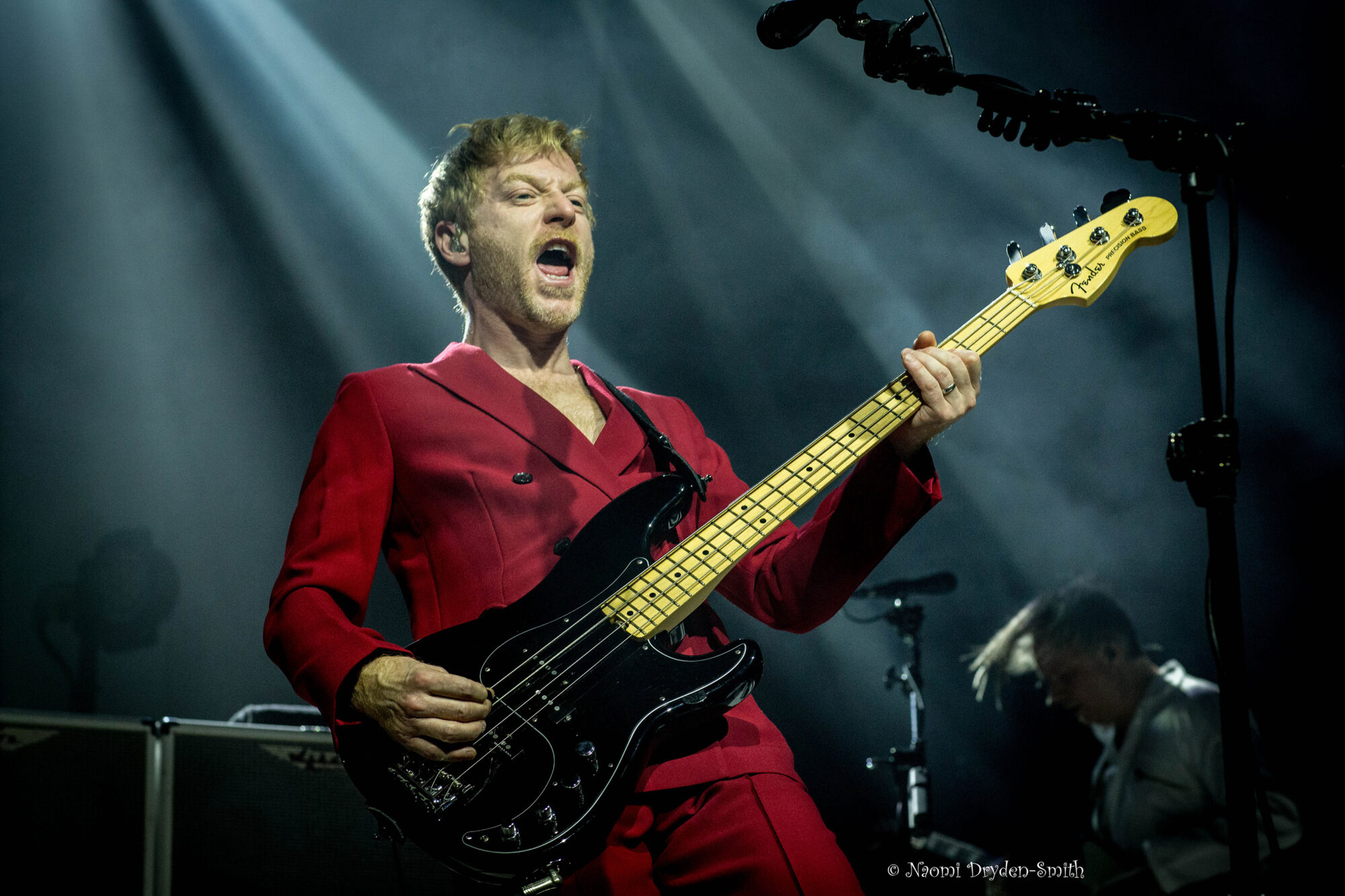 The dark sentiment of the verse, juxtaposed with the euphoric chorus of A Hunger In Your Haunt, punctuated by jagged guitar and the biting snare of Ben Johnston – and I’m hooked. I’m genuinely taken aback by the explosion of energy before me on stage, like a ‘highland charge‘.

James Johnston rocking a red double breasted look. Simon Neil seething, almost immediately drenched in sweat, clinging, hair, beard and fury. I don’t recall seeing someone so fired up in performance than this man, such rage within, and I know tonight I’ve been given a lesson in commitment. 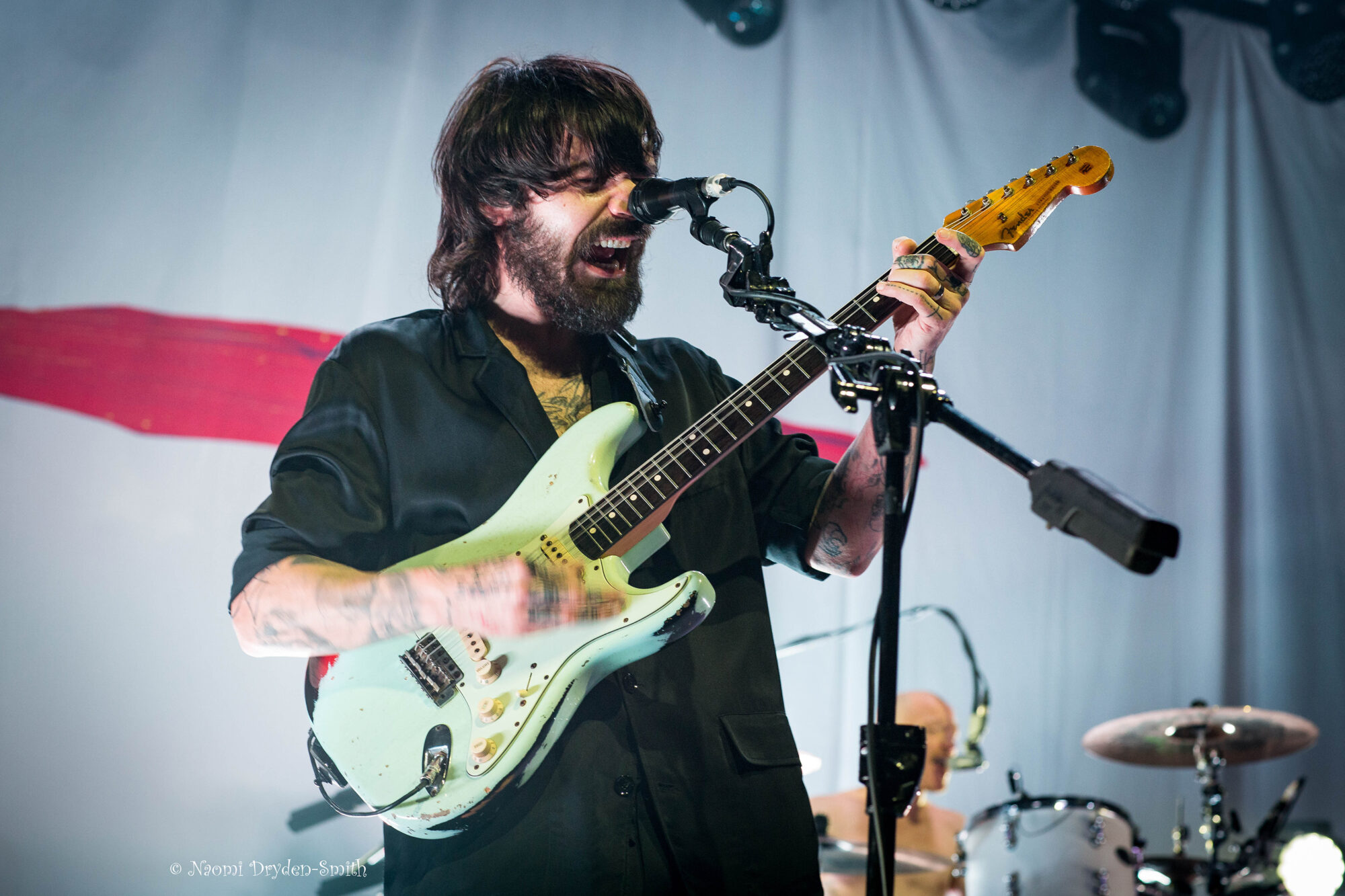 So fast forward again a few days, and thank God for setlistfm. Its Saturday night and I’m clanking away at my keyboard. I’ve made my Biffy Spotify playlist and I’m mentally thanking Naomi Dryden Smith for pulling me out of the mancave.

I quickly check with my mate about the ‘corporate rock pants’ thing, and he says ‘Fuck nooo I love Biffy Clyro’. Mon The Biffy!

Words by Phil Ross – more writing by Phil can be found at his Louder Than War author’s archive.