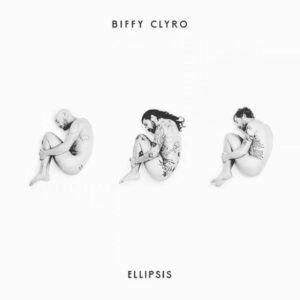 Scottish stalwarts change the bedding for album number seven, but is Ellipsis a worthy start to a new sentence, or a tired full stop? Filling in the blanks is Sam Lambeth.

Biffy Clyro have been one of many bands from Scotland to experience a transition into less jagged waters. Their earlier peers, such as Teenage Fanclub and (more specifically) Idlewild all slowly swapped waves of distortion for muscular melodies, while disciples Twin Atlantic are relatively recent arrivals. With this in mind, Biffy’s fanbase has a noticeable faction – namely either pre-Puzzle fanatics or post-Puzzle converts.

Ellipsis won’t change the former’s minds (notably, that the unilateral thrills and blistering rock of old has been long retired), and it won’t trouble those that have enjoyed the relatively reliable stadium rock the trio have exuded since ‘Saturday Superhouse’ showed a surprisingly smooth sheath around its post-hardcore howl.

Hailed as a new start and the beginning of a new trilogy, Ellipsis does indeed have new hallmarks. New knob-twiddler Rich Costey brings along the metallic stiffness and hip/hop influences, whether it be bathing opener ‘Wolves of Winter’ in rhythmic, taut strums or the bombastic ‘Flammable’. In some cases, though, the additions and layers feel like a case of gilding the lily, particularly in the sombre ‘Re-arrange’.

Elsewhere, it seems Simon Neil and co may strive for new waters, but are settled in their own ways. ‘Medicine’ is a retread of their haunting acoustic ballad ‘Machines’, but falls a little short, despite the swelling strings that attempt some sentiment. Similarly, the Jimmy Eat World-cribbing polish of ‘Howl’ has the arms-aloft, tops-off chug that the band can muster in their sleep. The only moment of real excitement comes in the blink-and-you’ll-miss-it bluster of ‘On A Bang’ and the earnest jangle of ‘Small Wishes’.

A saving grace for Ellipsis is the lyrics, Neil confronting his recent depression and low points in refreshing fashion. The lyric “but we’re growing” could feel hamfisted, particularly as it’s on the U2-sized ‘Friends and Enemies’, but Neil injects the right amount of sincerity, as he does with the touching tribute ‘Herex’. Even the blistering ‘Animal Style’ can bring conviction from the line “my head’s a fucking carnival.”

Ellipsis serves as an intriguing entry into the Biffy canon – caught between exploration and expectation, it feels more of a confused pause rather than a pre-cursor. Good and reliable, but ultimately Ellipsis could be a sentence not worth finishing.