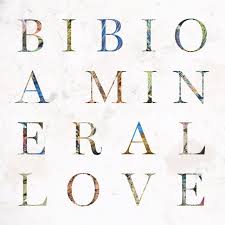 A Mineral Love is Bibio’s seventh album and one that “draws influences from many sources across all decades”. Simon Tucker reviews:

It’s important to start with the words of Bibio himself when contemplating his latest release as according to him;

““This album celebrates the sacred and precious struggles of human insecurities through many windows of familiar musical forms. It’s also a celebration of my love of the craft of record making, drawing influences from many sources across all decades from the late sixties to the present. All these referential forms have a twist, some are more full on cocktails.”

Now there’s drawing influences and then there’s A Mineral Love, a record so enthralled to the past that you would happily put it in a time machine and send it back. This is an album that you imagine groovy middle-class business types would have on in the background at their dinner parties whilst dressed in some expensive designer hippy copyist fashion. Next on the turntable would be Sade.

The entire album is bleached in sunlight so much so that any colour that could have been there has been drained away. Now Bibio might say this is an album full of positivity and love but in fact it is insipid and dull with each track blending into the next until you are just left with one giant “aren’t we all such fine people” slab of blandness.

Petals opens the album in a hazy psych-strum and is actually fairly decent as it uses backwards instrumentation which create a nice altered state but unfortunately this is where things start to nosedive. The title track follows and is a lazy jazz shuffle that plays like diluted Thundercat whilst Raxeria, with its tropical swing, reminds one of something Flight of the Concords would deem too naff.

Then there’s Town and Country a finger-clicking sway that you could imagine Cameron getting down to whilst enjoying pork products. With The Thought Of Us starts promising and is a decent stab at summer disco before dissolving into cheep acid house-aping wobbles.

Overall the production on the album is ok but they entire thing is so smothered that you end up needing a lie down in the shade.

There is no doubt that Bibio had good intentions making this album but unfortunately the overall effect is akin to eating too much candy floss, sore teeth and a migraine await all who listen.