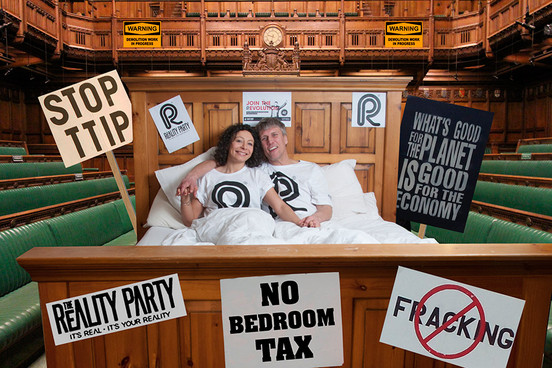 Bez and his girlfriend Firouzeh Razavi have announced that they’ll be emulating John and Yoko’s bed protests in 1969 against the Vietnam War with a 7-day bed-in of their own against fracking in London. What’s more the event will be live streamed!

A couple of years ago I had a surreal conversation with Bez about bees and the future of the planet. It wasn’t that the topic was surreal, it was that it was Bez. Since then he has been making a strong and brilliant stand against fracking and has been campaigning in Salford to become an MP on the anti fracking ticket.

As part of the anti-fracking campaign he has come up with the perfect idea of a John and Yoko style seven day bed in for peace with his girlfriend Firouzeh Razavi.

Emulating John Lennon & Yoko Ono’s famous bed-in for world peace in March 1969 at the Hilton Amsterdam, Bez and Firouzeh will be getting in their pyjamas and then into bed for a week of protest.

Several famous guests are expected to visit and the whole idea is to get the anti fracking story into the mainstream.

Each evening they will be putting out a Live Stream over video with live interviews intercut with some footage shot from during the day.

The seriousness of the fracking threat to the lives of normal Brits is so great, the Bez & Firouzeh feel compelled to do this.