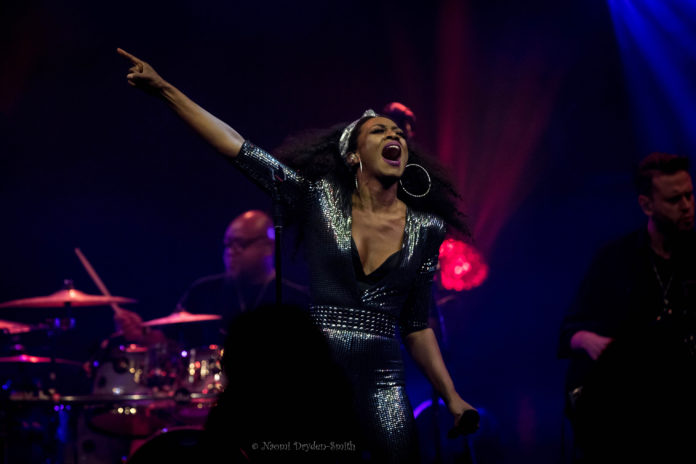 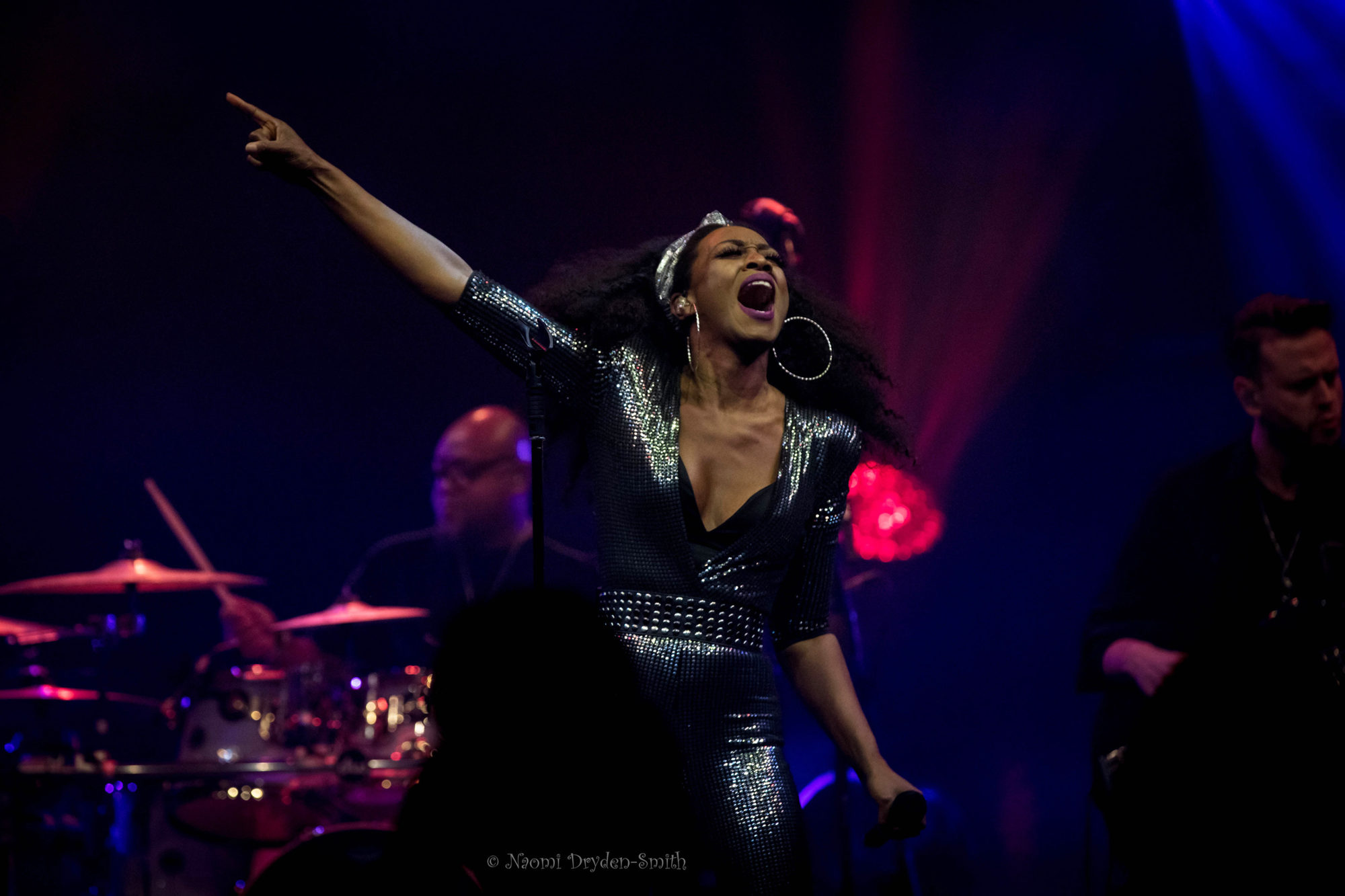 A down to earth Midlands girl with more than a touch of Vegas flair, the UK’s “Queen of Soul” Beverley Knight held the audience in the palm of her hand for the best part of two hours, bringing the Roundhouse’s In The Round season to a close.

Seven years in various shows in the West End, including Cats, Memphis and The Bodyguard have honed Beverley Knight from a wonderful singer into a consummate diva. She looks fantastic, like a golden Jamaican Avenger in pink sparkly shoes and mega-hoop earrings, flanked on a crowded stage by a band of 9 including two horns, guitar, keyboard, bass, drums and three backing singers, many of whom she has a long history with, and all of whom are having the best time together. 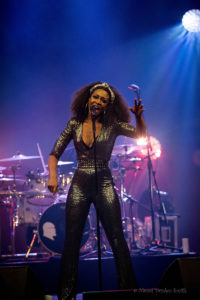 For the next two hours she takes us on a journey through a winding landscape, calling in on pop, disco, reggae, musical theatre, funk and soul, soul and more soul. She makes short work of I Can’t Stand The Rain and I Have Nothing, hitting those Whitney notes with impressive power and ease, shimmies a soulful I Can’t Get No Satisfaction, belts out Another Little Piece Of My Heart and struts her funky stuff to Black Butta, which she co-wrote, like the lost prodigy of Aretha and Tina. She commands her audience to dance and demands interaction “I’m gonna sing a bit, you’re gonna sing a bit. Alright?”.

Taking a breather she says that in her time in the West End she’s “had the privilege of playing some pretty amazing roles. One musical which is now a movie – maybe we shouldn’t mention the movie – has one of the most amazing songs in musical theatre.” She then proceeds to make everyone burst into tears with a spine-tingling Memory, it’s enough to fell even the hardest punk.

Looking back to yesterday’s Brexit she observes we need to come together as a nation – “I don’t know how, but we have to…”, following this with one of the highlights of the night, which slightly unnervingly sees all the men in the place singing I’m Every Woman just as vehemently as the women. In the time she’s off stage before the encore the thundering of feet actually sounds like a train might have forgotten the Roundhouse isn’t in service any more.

She brings so much diva, so much Diana-Aretha-Janis-Tina star quality that it’s only when she’s speaking that you remember she’s from Wolverhampton. Early on she introduces a song with an observation from her friend that sometimes people miss the gold in front of them and pick up the glitter instead. Perhaps this explains why she hasn’t been snapped up by the States (but no really, why hasn’t she been snapped up by the States!). Their loss is our gain – she’s done, everyone’s exhausted and heads home in the certain knowledge they have just witnessed something totally legendary. 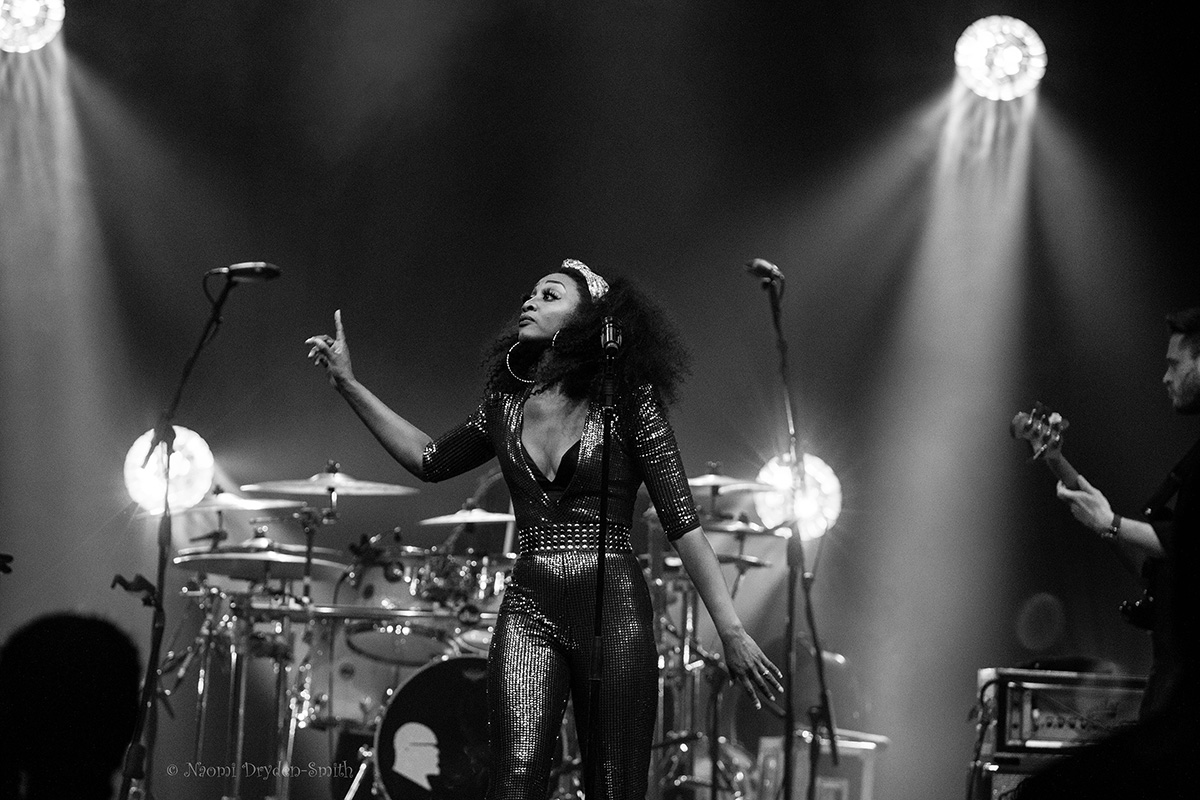