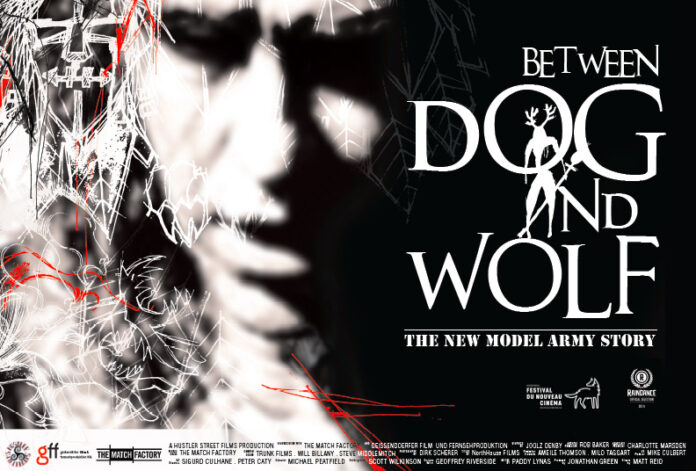 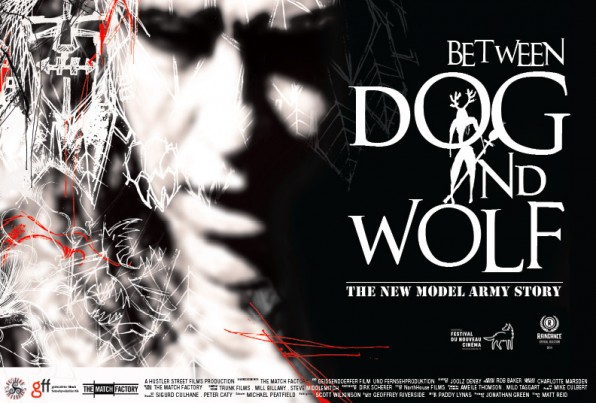 Between Dog and Wolf – The New Model Army Story

Destination London – the Vue Cinema just off Piccadilly which, as part of the annual  Raindance Film Festival, was showing the long and eagerly awaited New Model Army documentary.

Writer Matt Reid has been on the New Model Army trail for 2 or 3 years whilst creating this film, resulting in a finished article that tells it as it is.

From those very early days in Bradford, NMA’s Justin Sullivan (vocalist and only remaining original band member) tells the story of how the band was formed, where they rehearsed and how (and why) the band’s line up changed.

I was pleased with and interested in the contributions from bassists Stuart Morrow and Jason Moose Harris, especially the moment where Morrow listens to “Trust” in the knowledge that Sullivan wrote it with him in mind.

There was also plenty of warranted credit for Joolz Denby – writer, poet, artist and long -time collaborator with Sullivan and NMA. She may divide opinion – that gets a very clear reference in the film – but Sullivan himself remarks that without her, there would be no New Model Army.

I loved the stories of Vengeance, Ghost of Cain and Thunder and Consolation. Whilst writing this review, my iPad originally replaced “loved” with “lived” and as I went to correct it, there was a realisation that actually, I did actually “live” the stories of these albums – especially the latter two. My first NMA experience was Reading Festival 1986, which was around the time of Cain.

I was fascinated with the story of Green and Grey too. No spoilers – you can find out for yourself when you see the film. Suffice to say that the track is probably the band’s most loved.

There’s a lot of water under the bridge since then and the film skipped forward to Between Dog and Wolf – but not before revealing the extent of the Christmas Eve fire which destroyed their Bradford recording studio and not before dealing with the pain of losing Rob Heaton.

For me, this was the part of the film which caused the most emotion. Others attending agreed as we discussed it over a pint in the pub afterwards. The relationship between Sullivan and Heaton was opened up, with considerable detail on how they interacted and worked together, as well as dealing with the circumstances surrounding Heaton’s tragic death. A lump in my throat and the closeness of tears demonstrated that Reid had covered this major part of New Model Army history perfectly.

I could say a lot more about this film; how it forms a record of and the soundtrack to my last 28 years since that incredible, electrifying Reading Festival performance. Instead, I’ll urge you to go and see it yourself as it tours around the country over the next few weeks and months. Q&A sessions with Justin Sullivan, Joolz Denby, Matt Reid and Jonathan Green (NMA’s Manager) are planned after some showings and should provide even more insight into this fantastic story. Our very own John Robb is chairing the Manchester event on 14.11.14 – that’s definitely a date for me.