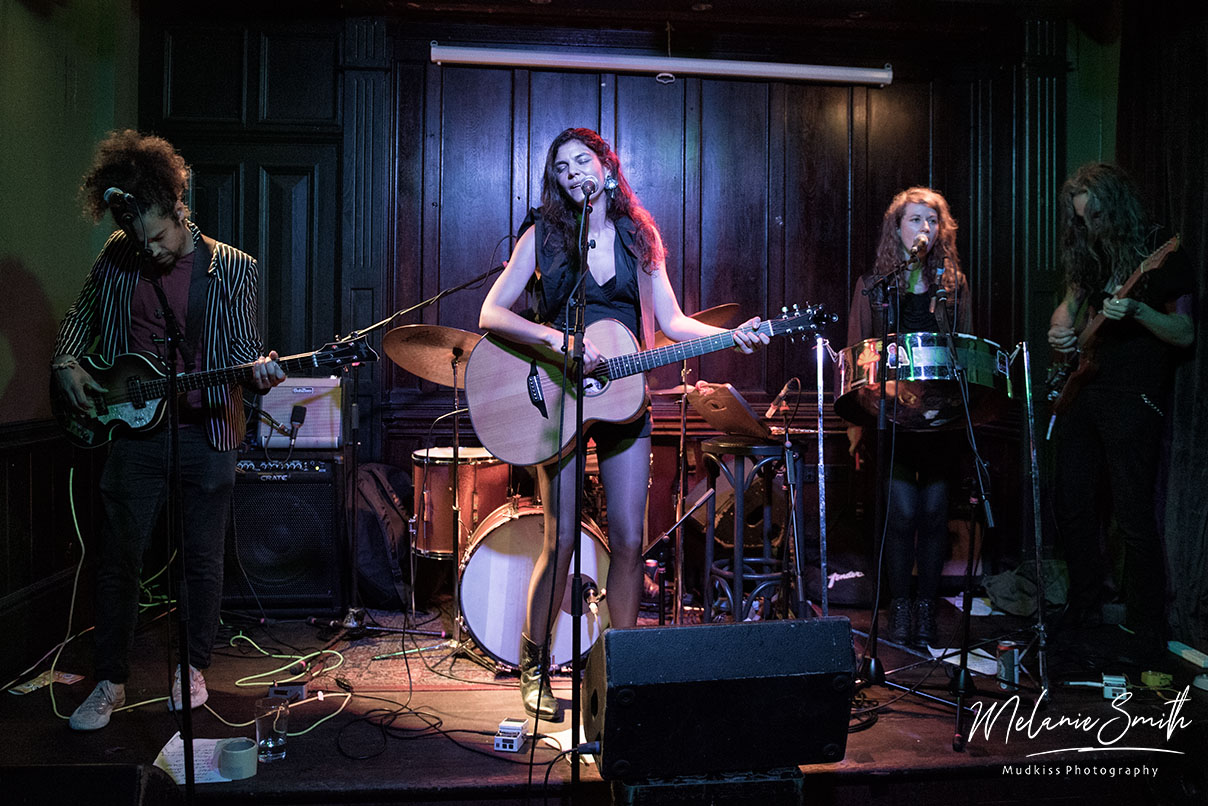 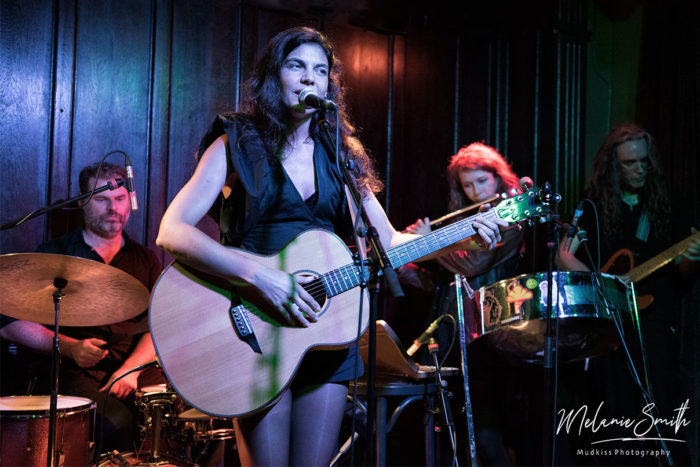 Having already been considerably impressed by Bethia Beadman’s latest album ‘Into The Peace’, released earlier this year and reviewed here Louder Than War’s Emily Oldfield was intrigued to find out how Beadman presents the enchanting eloquence and mystery of her music live.

And this was no ordinary gig – it was a visceral experience, tantalizingly tide-like, the little intimate room quickly filling with ebbs and flows of sound – as four acts were on the bill in total, thanks to the ever-generous organiser Chris Thomas of Red Balloon Music and ‘Are We Strangers Now?’.

First to play was Scott Candlish, channelling the mood of the room to the one of warm reflection with an articulate acoustic set, bringing forward the difficult balance of emotive vocals with deft guitar skill. With gravitas given both by voice and instrument, the simple arrangement still lent a powerful effect.

Another acoustic set followed – which conceptually could have been at risk of being too repetitive – but in fact it was something rather different from Dom Major. Serenading the crowd with the feeling-driven, emotive fuzz of mouth organ, he started on a song of ‘Christmas Cards’- the feeling of being cast away, having emotions undermined. A clear skill of Major is his ability to craft heavy emotion into resonant and relatable imagery; something which stood out so significantly in his set. He held audience attention, angling the notes of guitar as if conjuring up individual strands of felt sensation. Finishing with his much-loved single ‘Cigarettes and Beer’, moving in its melancholy yet still enchanting, it was a strong performance from this Manchester based singer-songwriter.

Having been lucky enough to be in the venue when soundcheck was happening, I couldn’t help being intrigued by the number of instruments that seemed to be arranged in the performance space. This led me to consider during the gig – if the first two acts were acoustic, when was the rest going to come in? That question was answered on entry of the third act of the night, Sugarcane, Robin French’s London based band bringing lush, uplifting notes and socially-resonant lyrics through a brilliant Bossa Nova sound. A key thing about this band is their ability not just to wield musical power but musical persuasion, tempting the audience into an eclectic journey with them. A sure sweet fix this was. 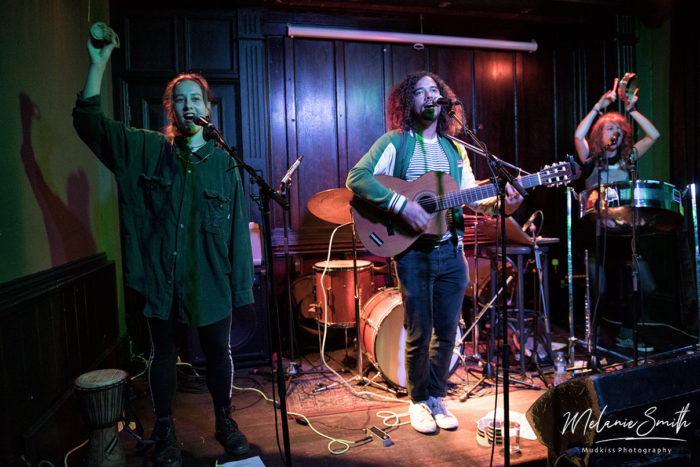 Sugarcane’s sound stood out as celebratory and distinct, each instrument still well-defined despite the number on stage; resulting in a hot jam with plenty of pulse. Kudos has to be given to Siânie Sianie on steel pans and later on flute, bringing a samba vibe so very much different to gigs I am usually accustomed to in this venue… and oh-so refreshing. This was topped up with the rhythmic drive of beats and gutsy bass, giving warm weight to bold shared vocals. Holding emotion well and still reaching tuneful heights, this was a band I knew I would want to see more of.

And see more of them I did, as innovatively, Sugarcane were also the band accompanying Bethia Beadman herself, who took to the stage with masterful poise, her body already brought into the stance of her music: elegant and yet intense. She started the set as the album ‘Into the Peace’ starts, simmering with ‘At The Beach’, the instrumentation rising evocatively around her. 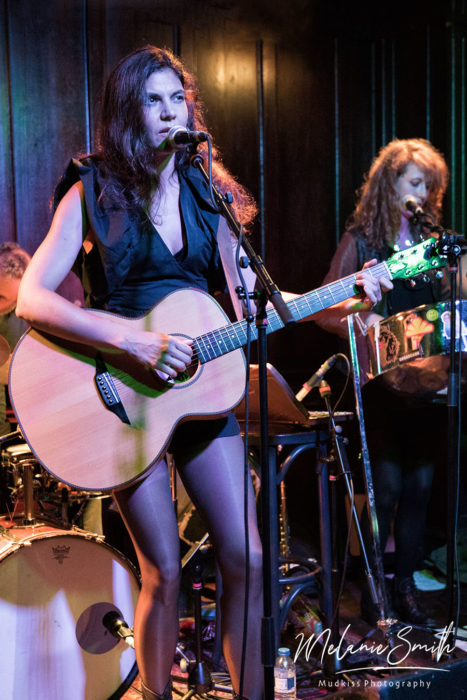 I was tuned in – and then tuned on, as the set blossomed into ‘Mary’ – the comparative downtempo captivating as Beadman’s vocals and acoustic skill soared, as if to touch the audience in their evocation of intimacy: ‘come get me’. As noted in my words on this track in the album review, it is a piece of music with plenty of interest – playful trills and the surprise of sashaying, sensuous sounds which again the band mastered for a moving live experience.

After all, this certainly was a sensual performance, Beadman bringing evocative, tactile tones to take the tracks well beyond the album. A personal highlight for me was ‘Still My Baby’, her vocals reaching beautiful heights with apparent effortlessness; a bittersweet love song leaving goosebumps on my skin. Sense-provoking, spine tingling… as her performance of ‘Peninsula’ also expressed, its dark, delving lyrical centre of ‘hello spider/hello killer/hello saviour’ amplified with additional vocals from Siânie Sianie. The line ‘Mother, I love you’ almost haunting.

This set highlighted how an array of musical artists can illuminate the best of each other’s creative abilities, as another wonderful work of partnership between Beadman and Siânie Sianie was in the tantalizing track ‘Leaving Song’. Introduced personally by Beadman as written following a relative suffering from illness, this was an arrangement of vocals, guitar and flute; fantastically intimate, exposing raw emotion which resounded in the room. 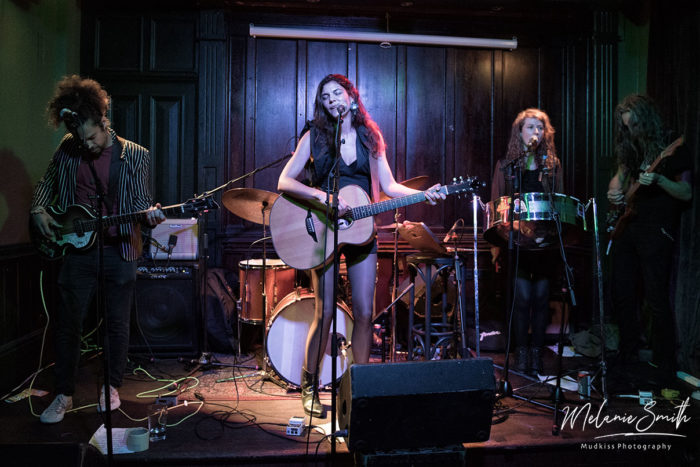 There was also much movement through mood and tempo during this set, each track unique and rich, encapsulating its very own performance. From subtle and reflective, to rousing and rebellious, ‘Music Never Did Any Good To Me’ was particularly transfixing – not just a tell-tale track of a relentless creative pursuit, but Beadman was apparently gripped and thrown by its intensity, her body seemingly possessed and pulsing with the sound. Music can be dangerous, delightful thing.

On being washed into this tender turbulence of a show, it was the type that listeners did not want to end. However, it was finalised in perhaps the most fitting way, with a stunning track not from the most recent album, but resonant all the same – ‘Georgia’. This included a note highlighting Beadman’s utter vocal power, as her voice channelled a sound which was almost shocking in it archness, a pure sonic eloquence which had all the room on tenterhooks. Turned into tenderness as the sound surged, this was a beautiful selection.

An evening of enchanting music, eclectic instrumentation and Beadman bringing her exploratory, intimate sound to Manchester, highlighting herself as a singer-songwriter not just of calibre but of a vocal craft which allows her creativity to reach rarely-touched emotional levels. It was wonderful to be part of.

Words by Emily Oldfield.More of Emilys work can be found here at her Author’s profile.