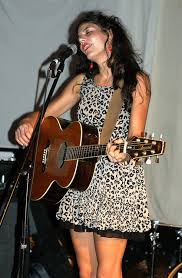 Bethia Beadman launches her new record ‘Chinatown’ at the Union Chapel on Thursday the 13th of November. Since witnessing desert rocker Mark Lanegan there last winter, his voice melting into the crypt, Bethia knew she would have to sing inside those walls.
She has made two acclaimed albums, ‘Made of Love’ (2010) and ‘The Old Ships’ (2012), both issued on her own label, Rosélie Records. The fiercely independent spirit of those recordings now smoulders in the shifting fault lines of her new songs – recorded with her band in her native West Country, at Peter Gabriel’s Real World Studios, and mixed in Los Angeles under the direction of REM’s Mike Mills.

Watch her new video – ‘Still My Baby’ – https://vimeo.com/109692841
A child ballerina, Bethia read Theology and Sanskrit at Cambridge. Ever in search of the ecstatic and transformative, she describes her new single ‘Mary’ as a “hot’n’rockin’ hula hoop of a tune – a drum beat, a girl, a vision in the Monastery of Timiou Stavros”. She has sung in a choir at the Vatican and toured in Courtney Love’s band on piano – a distant cry from her childhood in an underground grotto in Bath.

Bethia’s video ‘Fire’, an alchemical journey by LA artist Mason Jar, won Best Music Video at Cannes Independent Film Festival (2012) and the Gold Prize Award at Alameda, San Francisco. For her song ‘Glow Baby Glow’, Berlin art collective nowMomentnow filmed the moment when the underground grotto where she grew up was lovingly desecrated with an axe and chainsaw. Rolling Stone Magazine responded: “Glow Baby Glow shines home like a lantern.”
The sleeve of her first album ‘Made of Love’ reflects a room in the film ‘Paris, Texas’, a title that conjures images of a Casablanca-style love story across continents. But no, it’s just a place inoutback Texas called Paris, where someone once fell in love with a girl passing through, who maybe was French, or had a French name at least, something like that.  “But,” says Bethia, “Chinatown is everywhere, a place in all our psyches, unconnected to any land; we don’t even know what it is, let alone where it is or what is goingdown.”

She has lived for seven years in Homerton, the East London district that inspired her singalong single ‘Homerton Station’ – in a roadside bedroom with a copper cowboy bath, known as a coffin bath. No sooner would her velvet voice mend your night’s sleep than it would break raw your heart.

‘Chinatown’ will be released officially on 19 January 2015 on Rosélie Records.

“One of the best unsung artists around” – John Kennedy, Dazed and Confused

“Cinematic, windswept and intimate… like the soundtrack to a David Lynch road movie” – Guitarist

“The sorceress, the crone, the virgin, the downtrodden, royalty and nobleness, all at once” – Mason Jar