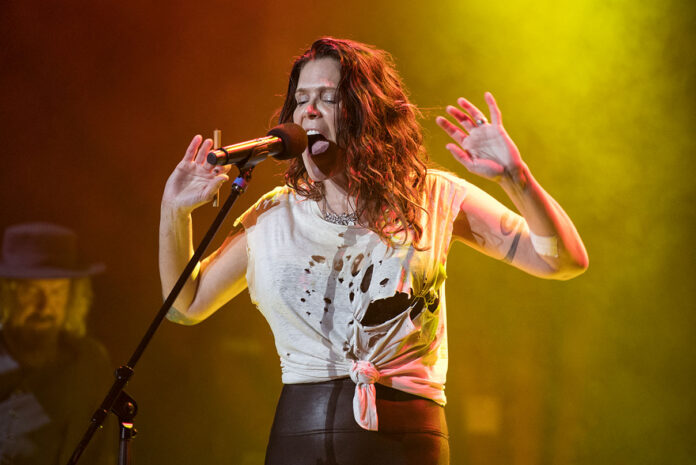 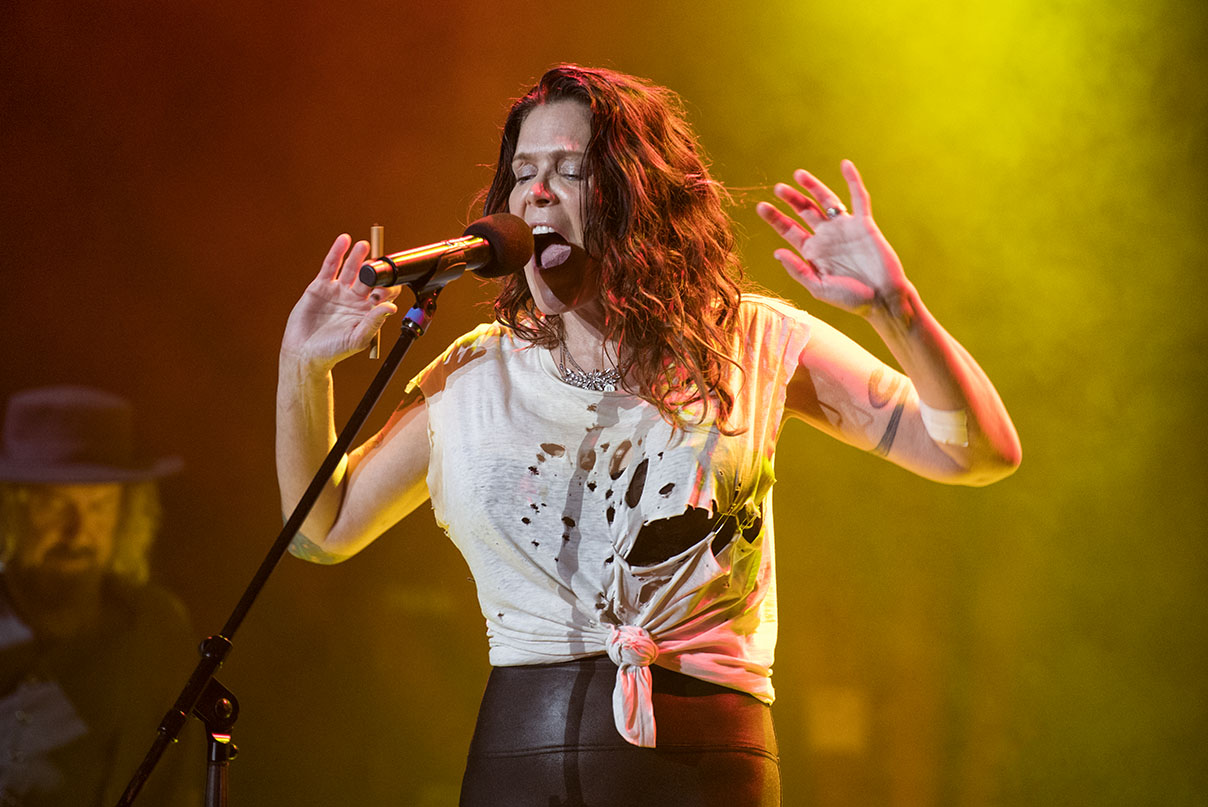 Arielle stands alone on the stage of this iconic building, with her two-tone electric guitar, speaking affectionately of it, and how it has been everywhere with her for 15 years. She proudly describes ‘the BMG Arielle‘ (a Brian May signature model which has been designed and named for her.) She plays it brilliantly and has a very impressive vocal range, from strong tones to sweet high pitched melodies. Arielle then picks up an acoustic to wow the audience and plays a beautiful cover of Moonriver. She demonstrates her vast musical, song-writing and technical talents during her short set, which is a perfect warm-up for Beth Hart. 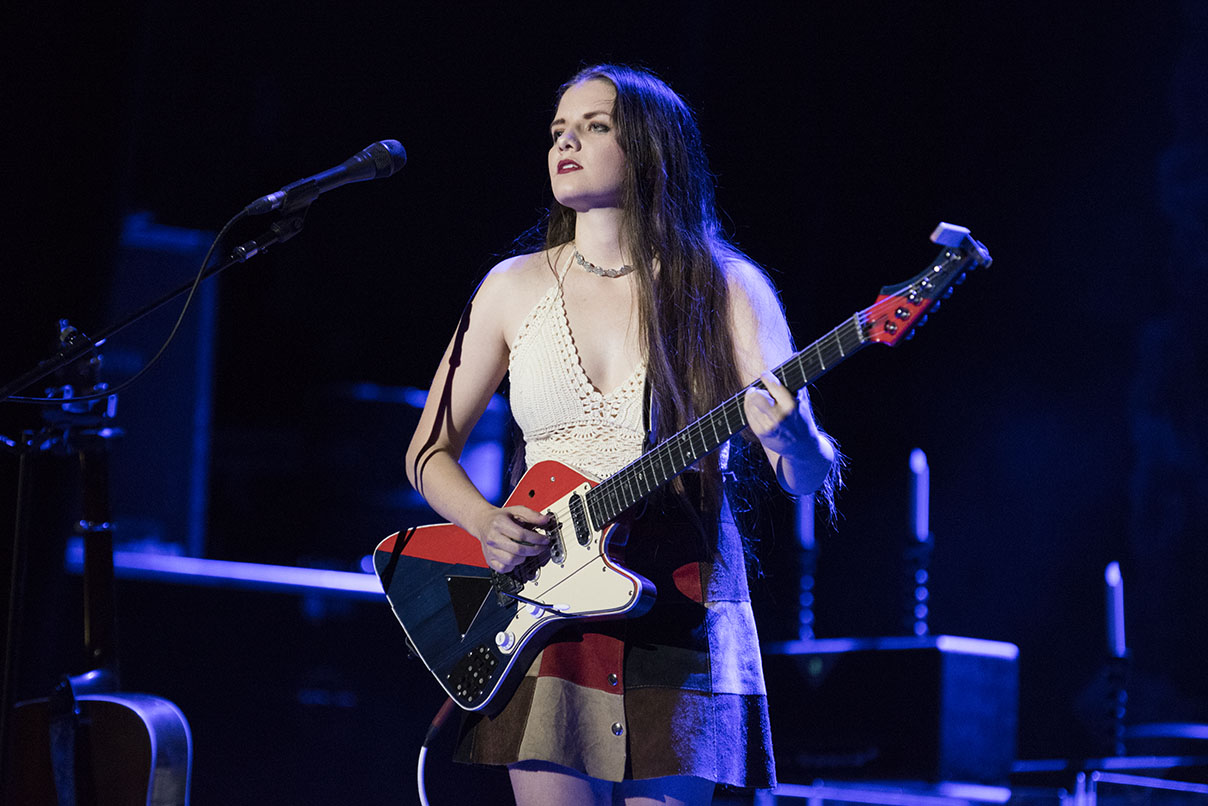 Beth enters the stage from the wings, barefoot and looking stunning. The audience are instantly drawn in by her striking stage presence and charisma, and quickly hush in eager anticipation of her first song – the brilliant Tell Her You Belong To Me. Her sultry but strong tones resonate throughout the iconic 19th Century concert hall. The music and her unique powerful voice rising to goosebump-inducing crescendos. What a show opener, even her exciting wild, screeches are breathtaking. At the end of the song, Beth comments how she loves the venue, “it’s so intimate and that we get to be like a family”. Nice thought. Beth and her band take us into Baby Shot Me Down with its bluesy, sexy melody, which she describes as a bit of an angry song.

Beth Hart’s voice, with its natural vibrato, is like a force of nature. A raw, expressive talent with the music seemingly pulsating through her. She tosses her long locks, her body writhes, she drops down on her knees as if it’s all-consuming. Following the song Rhymes, Beth sits at the grand piano to wow the audience with the powerful War In My Mind, which is the title track of her latest album. 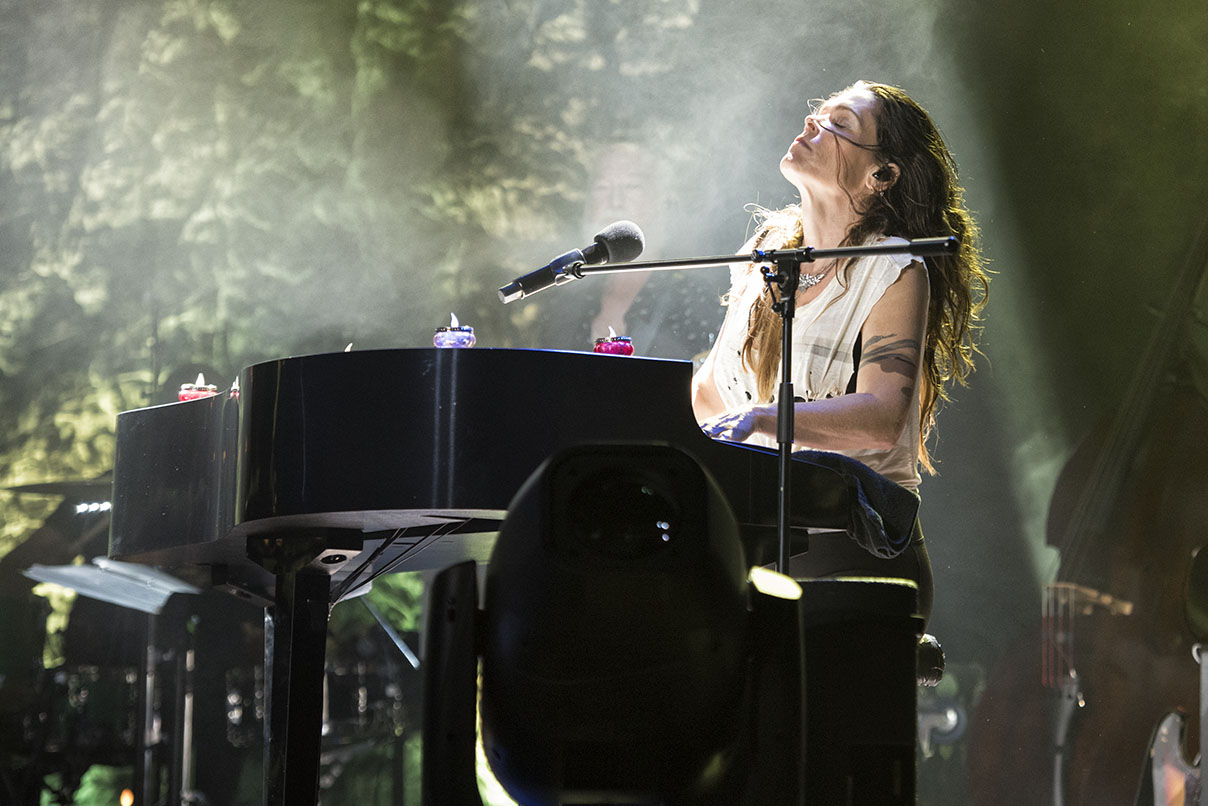 Although her performances are wracked with emotion, she’s happy to break the spell and jokes often with the audience and her band Jon Nichols (guitar), Tom Lilly (bass) & Bill Ransom (drums). She’s pretty funny too. She amuses the audience by describing the bamboo stick (which she grasps in her fingers), it is to help her through quitting smoking she says. Beth also proudly shows her nicotine patches, this prompts congratulations on the achievement from the audience.

She teases the drummer Bill at the start of her amazing Baddest Blues song, affectionately mocking him after his one cymbal shot. She jumps up to the bass drum for a play fight with him – I think she wins. An ever-so-slightly drunk audience member begins to sing overly loudly. Beth playfully asks him to have a drink for her, before inviting him up to the stage and handing him the mic. After giving his impromptu performance, he staggers off once more, clearly bathing in the applause from the audience and his big moment with Beth. As the audience cheers, he takes a bow, though doubt he will recall any of this the next morning.

Beth asks the audience to choose the next song out of two written for her dear sister, Skin or Sister Heroine – the latter is the most popular choice and Beth performs it with such passion, emotions visibly bubbling to the surface. She then performs Without Words In The Way, with bass player Tim swapping for an impressive double bass.

After a few stage and instrument adjustments, we’re now treated to a mesmerising jazz quartet, fitting beautifully with this iconic venue. Between them they have so much fun in this little section, it’s a joy to watch and listen to, the special bond between them all is so apparent. They play the delightful Sugar Shack, Beth giggles and tells the audience that they never know what they’re going to get from guitarist Jon in the next song Can’t Let Go as he does something different every time. It’s a pleasure to be let into their private joke and experience Beth’s delight at the surprise pick & mix yet brilliant guitar riffs.

The next two songs are covers, the first being Melody Gardot’s If I Tell You I Love You. Beth describes her as her favourite living singer. This is such a fun, quirky and sexy number enhanced by Beth’s sensuality. Then follows the beautifully written Lullaby Of The leaves by Ella Fitzgerald, and even though Beth confesses it has taken her ages to master, the performance is again jaw-dropping. 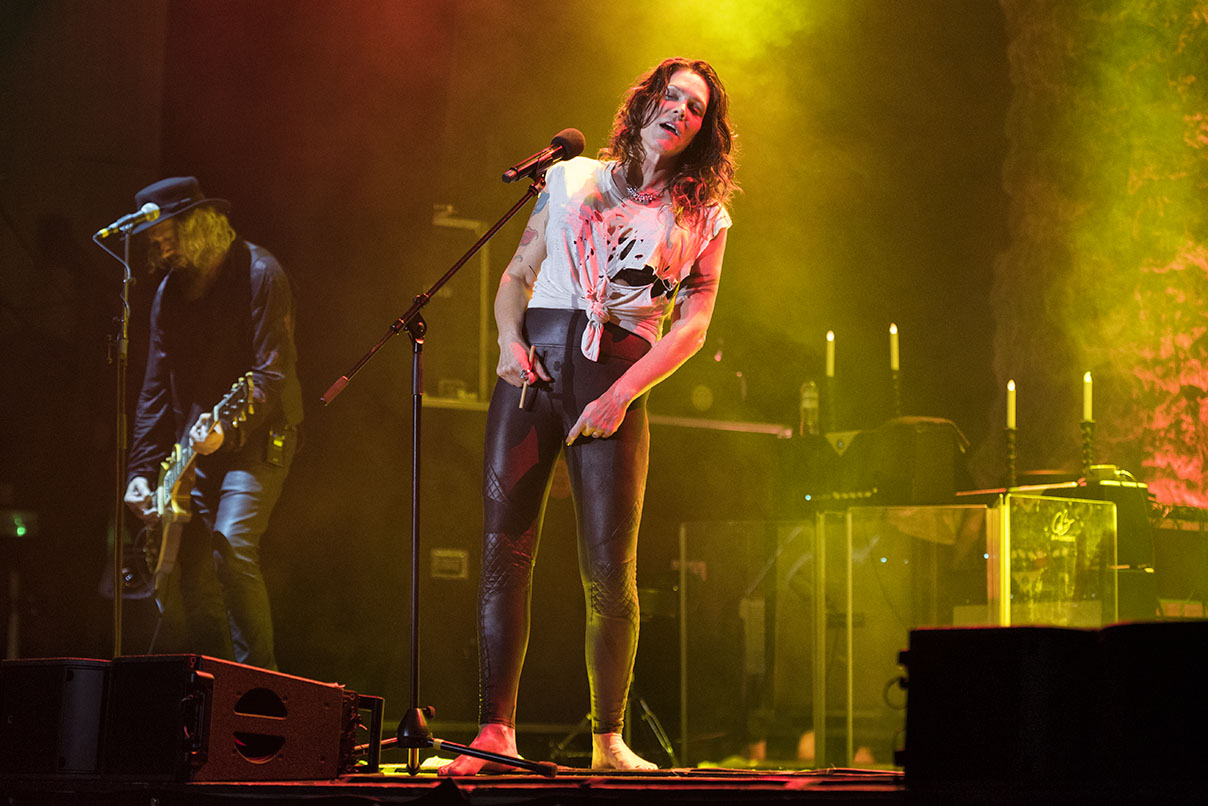 A bouquet of flowers is handed to Beth from her friend from Ireland, who she describes as her “spirit sister”. Then follows a hauntingly beautiful performance of St Teresa on the piano. Part-way through the song, Beth breaks down and has to stop. As she dries her eyes, every person in the room just sits patiently allowing her to take that moment; why not she deserves it. After composing herself and needlessly apologising, the mood in the room is one of full support. She speaks of her regrets over some past decisions. She can do no wrong at this point and her openness and honesty about herself are met with shouts of “we’re with you, Beth” and “it’s ok” from some of the pluckier audience members.

This is now more than just incredible music, it’s a story and sharing of experiences. It’s such a moving moment and a perfect example of how pain and passion can be woven into beautiful words and music for people to share and appreciate together. This has the added benefit of helping to break the stigma and supporting others to deal with whatever challenges they battle in life, silently acknowledging ‘it’s ok not to be ok’ in that special moment. 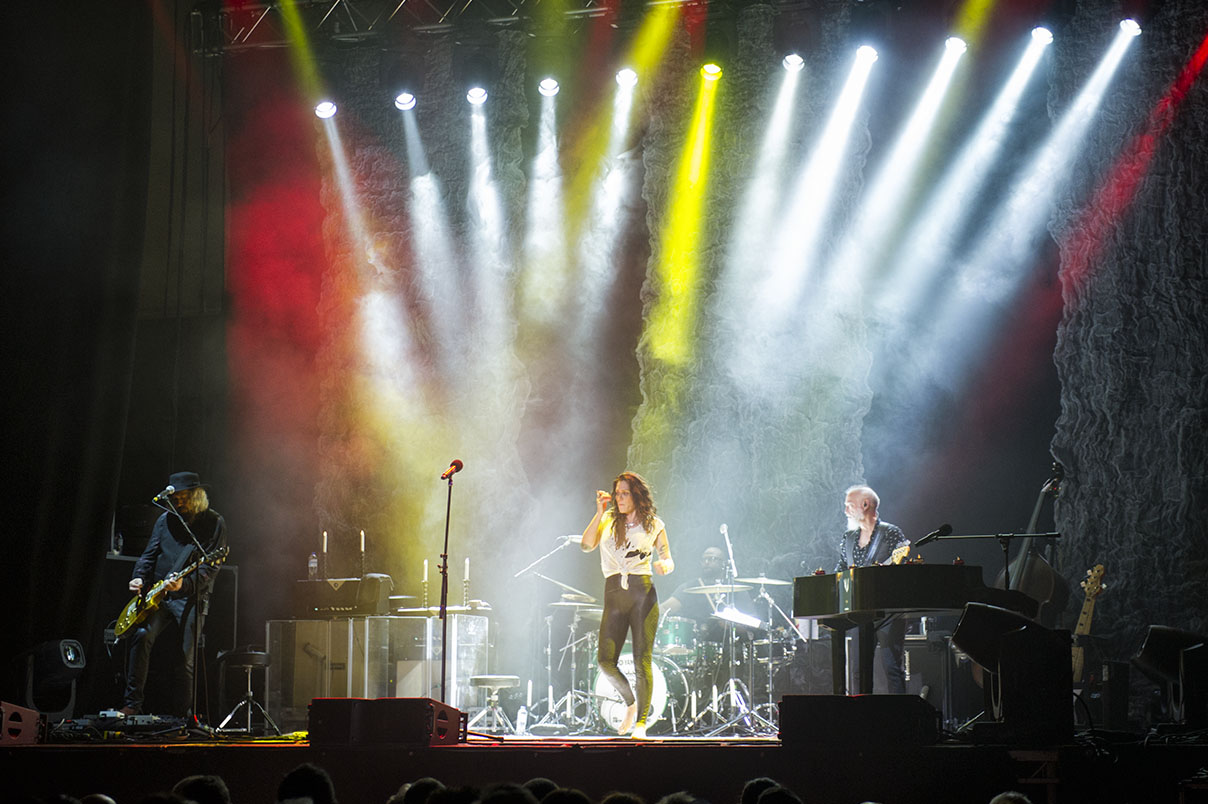 The beautifully written Leave The Light on and Chocolate Jesus follows, then Rub Me For Luck, as she begins the song laughing and mischievously throwing her foot up onto the piano… she’s allowed, she’s Beth Hart.

For her encore, she sits crossed-legged on the stage and reflects on the events of the last couple of years. She speaks of the pandemic, the hardship and how we’ve all been in it together and doing the best we can. Naturally, this provides a perfect segue into her final number of the evening Thankful. It’s pertinent and poignant. The audience demonstrate their appreciation with a well-deserved standing ovation. They too are Thankful for the opportunity of attending such a rousing, life-affirming live experience.