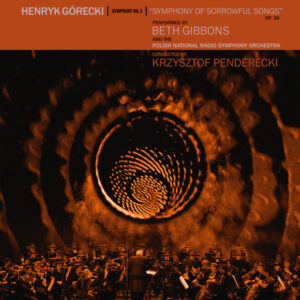 There is a moment. Roughly halfway through the first movement where the Polish National Radio Symphony Orchestra quieten down. Easing us back from the brink they were building towards. The strings settle as a bed and a piano strikes out a singular chord. Then it appears. In comes a voice at once so recognisable yet now found in a new context. The voice strikes out on a journey through a Polish text, a lament of Mary mother of Jesus. It is a stunningly dramatic and moving moment as the voice belongs to one of our greatest singers Beth Gibbons.  Gibbons, through her work with Portishead and as a solo artist, has always been a voice you can rely on to pull at heart strings and paint a vivid picture. Her voice is singular and has that rare gift of being able to sound so vulnerable yet so powerful at the same time.  A perfect match then for Henryk Górecki’s Symphony No. 3.

Symphony No. 3 or the Symphony of Sorrowful Songs as it is also known is a heavy work that is based around the themes of motherhood and separation with the second movement featuring a text written on the wall of a Gestapo cell and the third a Silesian folk song about a mother searching for her murdered son. Heavy subject matter that carries many an emotional pull. The masterstroke that Górecki managed to pull when composing this work is he manages to allow just the right amount of light into the piece giving the listener fleeting and vital moments of optimism. This is a symphony which can knock you off your feet with its beauty and emotional punch but one that also allows you to smile and see the sun breaking through the winter heavy clouds.

For this performance Beth Gibbons embarked on a series of intense preparations which included learning the original Polish text and the emotional weight it carries without being able to speak the language. The resulting performance is one of the most striking and powerful you will hear this year. The power of Beth Gibbons’ performance allows for those listeners who do not speak Polish to instantly connect with the themes and emotions that the text creates. It is a performance drenched in pathos and brittle beauty. Beth Gibbons is a perfect match for this subject matter and not because she is a naturally gifted singer but more that it sounds like she is tearing herself apart to reach certain notes and emotional peaks. The words don’t float out of Gibbons’ mouth more like they are forced out by sheer emotion and drive.

In looking for comparison releases it is not just to the classical we should turn but to pop culture itself as this album feels like Gibbons’ Bowie-in-Berlin project. The post-War greyness of albums such as Iggy Pop’s The Idiot and Bowie’s own Low (in particular its second side) are shared here and the way that Beth changes into the different characters for each separate movement (the balance between fragility and power she shows on Lento—Cantabile-semplice is quite simply astonishing) also reminds one of Bowie.

Symphony No. 3 (Symphony of Sorrowful Songs) is a striking and powerful piece of art. The Polish National Radio Symphony, conducted by the genius that is Krzysztof Penderecki, bring Górecki’s masterpiece to vivid life whilst in the centre of it all Beth Gibbons delivers the performance of her career to date. A necessarily emotional listen and a simply essential release.