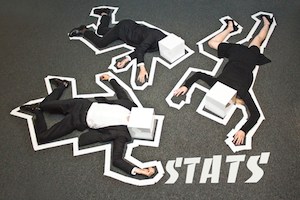 Louder Than War’s Keith Goldhanger heads down to Dalston, in order to catch Bete Noir and Stats in what could be the tentative beginnings of a goth revival.

The problem with all that “Goth” nonsense back in the ’80s was when it became far too serious. Bete Noire seem to know this. Not that they’re actually a barrel of laughs but they’re certainly not po-faced about this music performing lark either. Those old enough to remember the time when the Virgin Prunes stopped being weird and got Colin Newman from Wire in to produce them, would do well to check this band out. Bete Noir vocalist David M Hargreaves certainly knows how to throw a few good shapes that no one else seems to be managing nowadays. Stick him in one of those hugely populated Goth clubs that exist around the world and he’d immediately become a new hero for a black lipstick wearing generation. Put a few albums + singles out by this band and we may witness an increase in a few of those music loving fans with big hair and Siouxsie Sioux t shirts turning up in these small venues that the band currently visit as an alternative to one of those clubs that haven’t changed their music policy since 1986.

Before the world discovered ecstasy and dance music like we know today, some of us cut out shapes on the dance floors of all night goth clubs. Some of us actually didn’t cut shapes to be precise, we just stood there chewing our cheeks watching people with sillier hair moshing their bodies to early Siouxsie Sioux, Cure, Alien Sex Fiend, Iggy Pop records (you only needed 5 to become a goth DJ in those days and the numbers may not have increased much since). These clubs were terrible but there wasn’t much else going on if you wanted to stay up after bedtime.

Bete noire would be loved by those of you who still fly the flag for this musical genre. A genre I’m almost apologising for but a genre that existed and one that has been ridiculed since about 1985 but nevertheless had some fantastic bands lumped into the scene. Now the dust (or flour) has settled the world is ready for Bete Noire and with a flamboyant man leading this assault to boot. A couple more bands like this and we could be laughing again…..well maybe not laughing but maybe visiting rooms with miserable looking people with lots of hair standing around the edges chewing the inside of their cheeks just like some people did thirty years ago.

These half a dozen tunes we get tonight do not sound dated though. These tunes are huge catchy and promise a lot in the way of what we’ll be embracing once they start throwing even more songs our way.

Whereas Stats may remind most people of the Talking Heads and that’s not a bad place to begin either. If this is just the beginning of what we’re going to be getting from this outfit then the future looks bright. Already they appear to be a really solid outfit standing here, in a tiny pub in East London whereas they could be anywhere really, and anywhere and everywhere is where they may end up, and standing…except for lead singer Ed who looks like he has very long arm extensions that flap around and give us something to watch whilst the rest of the band, stand and look glamorous, intensively concentrating on their individual jobs and putting their shift in … Early impressions of this band have us dreaming of a future when we’re all dancing to their music as their songs are flowing seamlessly which may or not be the future. They may remind us of Talking Heads, but they remind at least one of us of Clock Opera or the Dutch Uncles with their jerky dancy catchy tunes. Stats are making great dance music but they haven’t joined a lot of it up yet.

In months to come they may possibly just do that.

You can visit Bete Noire on Facebook, or listen to them on Soundcloud here.