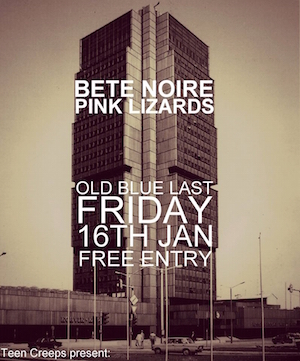 Keith Goldhanger wanted to get warm before going home so he popped into a free gig. He ended up enjoying it so much he had to tell us all about it.

There’s been a lot going on in this building recently.

A pint of ale may give you some shrapnel from a fiver to put back in your pocket but the gigs have been free and therefore, in response to whoever it is putting these events on, a band turning up to play at half eight in the evening can find themselves standing in front of possibly their biggest audience to date.

For the record, we don’t walk through these doors in order to gather information so we can sit up in bed until the early hours writing about this stuff ….It’s Friday night, we’ve been out watching bands all week, Bete Noire are in the house and some of us have been listening to this lot for a while now.

Basically, we’ve popped out for a pint and to keep warm before retiring home in the anticipation of a bloody good lie in the next day and now one of us feels the need to tell you how decent this was.

It’s about nine o’clock and four ridiculously looking blokes are standing in front of us ready to go. We discover they’re called SAFARI SUITE and without playing a note we have already made up our mind that this will be worth watching for so many reasons that break most rules in a book that doesn’t exist. This is comparable to one of those Eurovision acts that brighten up the evening and who make close friends nod appreciatively, stop chatting and agree it’s rubbish but can’t look away. By the end it’s decided that it’s not rubbish but in fact rather brilliant and that this is the sort of stuff that causes some of us … OK … one of us, to fire up the technology when we get home in order to not only try to find a picture but some tunes.

We find the latter, therefore it’s up to you now to close your eyes and imagine a man who looks like Noel Edmonds (pre-Swap Shop) with glitter eyes, big pointy shirt collars and BELLBOTTOMS (Huh!! – as Mr Spencer would say – John not Frank ).

We come to the conclusion that we’ve left the house again tonight thinking we’re following the mindset of John Peel when in reality we’re wearing the suit of Terry Wogan … Then they play some music and they’re not a trippy psychedelic band as one of us imagined they’d be (My money was on them about to give Blonde Bunny a run for their money). Short, shouty garage riffs that are a joy to hear are thrown our way and we are smitten. This is entertainment, we scream, in between tunes as we thump the air with delight. Not just at the event unwrapping itself in front of us but at the fortunate situation that we’ve all managed to succeed in turning up in the same room at the same time (On time) that this is happening. On the downside there are probably people here too young to remember The Goodies but we’ll let that go. We’ve been thoroughly entertained for half an hour and it hasn’t cost us a bean (we tried using this currency later on but the bar staff would have any of it).

Then to put things in perspective we get a polished rock (probably spelt “Rawk”) trio by the name of PINK LIZARDS, who – like Simple Minds for example, really know how to play their instruments and impress us for a few songs before we realise we’re lacking anything we’ve not heard before and that this is the sort of thing our mums are imagining we’re watching when we tell them about our social lives in East London. Their White Stripes influenced tunes (and that’s being kind) go in one ear and straight out the other then crash out into the street without looking both ways. Put these on any stage in any venue across the UK and any middle aged rock fans who watch XFactor or The Voice with an ounce of anticipating a decent artist are probably going to be impressed easily and would go home happy. On a stage in Shoreditch on a Friday night following four weird looking chaps shouting at us and proceeding a bloke in a long black robe covering his nakedness (more about that in a moment), this is so ordinary that we’re happy to be discovering mediocrity again and whist we wait in vain for their hair to fall out of place and some sweat to drip off the ceiling we reminisce about the shouty stage diving antics we’ve been watching in this room recently and despair that bands like Pink Lizards are more likely to one day soundtrack your weekly shopping experience in one of those expensive clothes shops that don’t pay their taxes, than the bands that make us leave the building for ten minutes even though we don’t have any fags just to pull ourselves together, pull our trousers up to waist height and sign into our Twitter accounts to tell the world about. 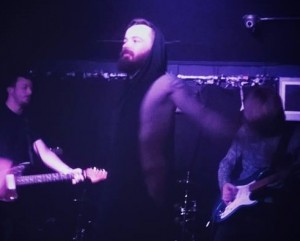 Some of us have witnessed Bete Noire (photo right, © Joe Pop) in rooms containing about three other people. A lot of us weren’t even present when they performed to an audience who stood chatting with their backs turned ignoring them and therefore it is with great delight that this evening is a (bigger) repeat of the first time we bumped into them. A big crowd is present and a big crowd is what Bete Noire deserve, more than most bands we know at the moment. They still sound like a modern goth band that have spent their youth listening to old Modern English or Gene Loves Jezabel seven inches whilst drinking in those old Bauhaus tunes and adding some melody and this is what some of us need in today’s multi-influenced world we inhabit. David M Hargreaves, walks the walk amongst the fascinated attendees as his voice simultaneously cuts through our ears like a knife through a cooked lasagna. He’s Kylie with a beard, Robbie Williams with a band and Boy George without the make up, shit clothes, rubbish songs and back catalogue of number one hit records…

Regular bass player Andrew G is currently back in his home country down under and we’re treated to a fine display by a stand in from Antlered Man and even though the sound quality decreases slightly the longer it goes on the performance has the increased attention of the static crowd who it’s noted are at times singing along pint in hand and chuckling away at (with) the bearded man in his outfit that via the magic of Google might be called a “Jersey Shift” is commanding not just the stage but the whole goddamn room, arm in the air, face lit by the tiny beams from mobile phones and melodies, choruses and songs we’re falling in love with on every listen.

Videos from the night by Deb Highfield: