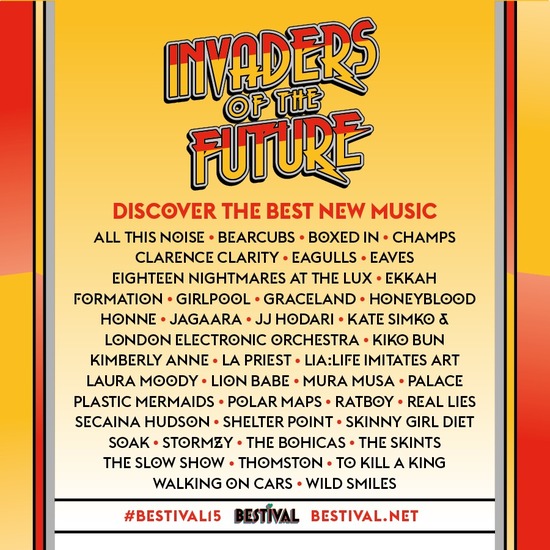 Bestival have announced this year’s Invaders Of The Future Stage alongside a bevy of brand new acts to take to its stage.

The festival, which takes place at the Isle of Wight in September, has a reputation for delivering the very best in terms of brand new artists. The Invaders of The Future stage is specially equipped to showcase the breeding ground of some of the hottest new talent out there.

Curator and head honcho for the festival, Rob Da Bank, has even admitted it’s his favourite stage of the festival. Releasing a statement for the fest, he declared, “It’s the beating heart of what Bestival is about – breaking new talent and exposing the undercard. It takes me about six months to book, on and off, wondering who the next wave of breaking bands are going to be, and trying to get the right mix of electronic, folk, soul and indie, dub and grime… and already I can see loads of these acts being on much bigger stages next year. Everyone from Ed Sheeran and Alt-J to Kate Tempest have played early gigs on this stage. So, from the wildly different sounds of Ratboy and Lion Babe, to The Skints, Clarence Clarity and the Island’s very own Plastic Mermaids, I promise you, this is the sound of the future”.

Main highlights appearing on the stage include the soulless punk drudge of Leeds five piece, Eagulls, caustic LA duo, Girlpool, and the shiny, RnB pop of Ekkah. Joining them are the 90s indie indebted Honeyblood, sister trio Jagaara, hotly tipped one man band Ratboy and London reggae outfit The Skints alongside a load more up and comers.

They join the already heaving line-up which includes The Chemical Brothers, Tame Impala, The Jacksons, Fat White Family and Skepta amongst many more.