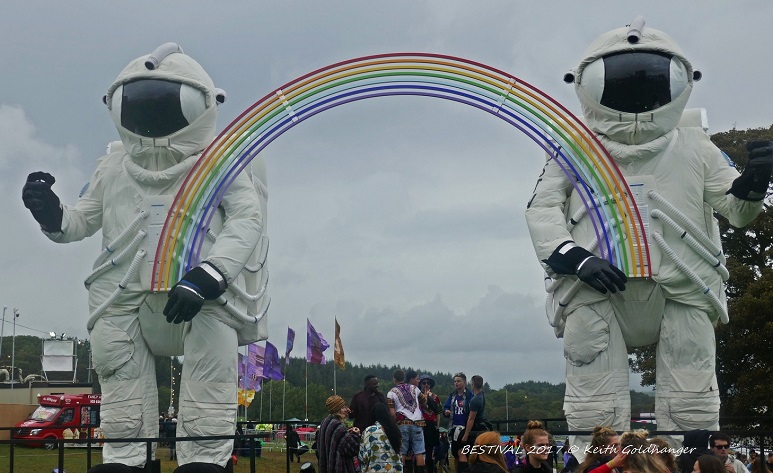 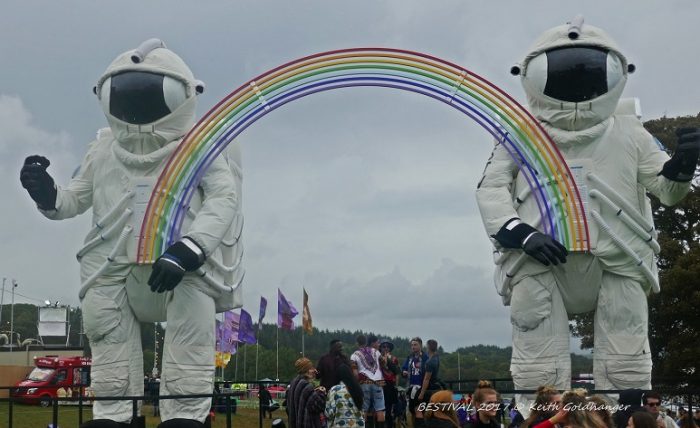 Saturday arrives, Bestival 2017 has passed the half way mark as we wake up after a decent nights sleep interrupted by the odd downpour. In-between a few more heavy downpours and intermittent sunshine we walk through the woods and walk into bars where DJ’s we’ll never know are playing tunes we’ll never know. We walk past a huge crowd watching Disney Rascal who are playing a tune from Jungle Book and we wonder if those in the dry are there because they simply saw the act as Dizzy not Disney?

Over at Caravanseria local festival regulars PRONGHORN are responsible for making scores of people stomp their feet in the mud and prepare the crowd for another long night ahead. They’re planing to play a couple of gigs over the weekend at Bestival either side of a wedding if they can get out of the site and back in again. 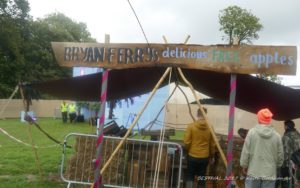 seemingly from the orchard of Bryan Ferry. These are probably the nicest items of fruit we’ve eaten for a long time and hope they really are from where we’re told they are from and not just there because they needed to be eaten and sticking the name of Roxy Music’s front man on a sign to encourage more folk like us to indulge in such an activity.

Our concentration of DAT BRASS, a brass band that play hip hop is interrupted by a chap who looks a bit like one of the characters in the TV show The Inbetweeners. He’s distracting us and doing the same thing four times over before we realise it actually is the bloke from the comedy show. We then notice it is a film crew in front of him but the police arrive and keep interrupting ….we couldn’t work that bit out for a while and for ten minutes we attempt to separate the actors from the festival punters resulting in different opinions before legging it over to the main stage again.

What we have worked out now after a second viewing this year is that we don’t really like RAG’N’BONE MAN’s music very much. It’s just a bloke in a red jacket singing rather well like an Xfactor contestant but singing his own songs. Songs that Xfactor contestants will probably be singing at their auditions in a few years time.

HONEYBLOOD and KLANGSTOF both play brilliant shows, our memory cannot recall whether all this was before or after A TRIBE CALLED QUEST however it was getting late when we learnt that SKINNY GIRL DIET have now slimmed down to a duo and TOO MANY T’s are performing  without Ross Standalof who’s either at a wedding, stuck in some mud somewhere or maybe doing another show somewhere else on site.

We sleep again, get up, keep the same clothes on have a can of ale for breakfast and comment on the lack of tents around 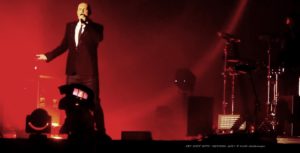 us. It’s Sunday and some people have left or are leaving. We’re staying. Our tent is still erect thanks to all the spare pegs we’ve gathered from around the fields and there’s no way we’re missing THE PET SHOP BOYS (pic right).
We slide down some hills on the final day, dig our heels into the mud, prey we wont fall over again, have another pie (today with gravy) and start telling anyone who would listen that LA SALAMI’s backing band comprise of three bands some of us love to bits but aren’t here (Hoo Has on bass, Mohit on Drums, Francobollo on guitar) LA swoons his way through the rain and isn’t put off by the odd flying piece of tarpaulin that seems to be flapping around as the breeze we were enjoying turns into a rather uncomfortable storm.

As mentioned in Part one, TOO MANY T’s with even more members waiting in the wings to join in don’t get past the first five songs and the stage gets closed down. PETE KOSANOVICH manages one guitar solo played along to a stand up drummer before this trio have the plug pulled too.

CHASTITY BELT are not of our liking once we return. CAKES DA KILLA are not to our liking. The people on the HMS Bestival are average and standing outside the Sunday Best shop are Too Many T’s about to play again in a room that could possibly hold 20 people comfortably or 45 uncomfortably. This is quite possibly another highlight of the weekend and a good warm up (literally) for 80’s, 90’s and this century’s favourite pop group the Pet Shop Boys who mention more than once they’re happy recreating their 80’s sounding tunes.

These are not flash backs to the 80’s though.

The 80’s synth bands that we saw back then played loud cheap synths with too much top end not big digital muvver effin’ bass booming washy glorious sounds that we get tonight.This is an act some of us never expected to see at festivals thirty years ago and this is an act that are perfect headliners in 2017. Mixing the old with the new and the odd cover version we get perfect entertainment that helps us to not even begin thinking of how we’re going to be getting out of this

place in the morning. Fireworks follow, then IDLES (pic right) then GALAXY THIEF, 2 MANY DJ’s get seen, TOO MANY T’s are playing another show in Caravanseria , but the thought of a fourth visit in 24 hours stops us from attending (ok then…we had another peep for five minutes). SWAN LEVITT does enough to take us back to our tents happy and satisfied that Bestival has delivered four days of absolutely joyous acts that have made all the mud, rain and aching bones worth while.

We find out about the Casualty the following day.

Loulla Michie’s death seemed to become a ‘celebrity death’ once the tabloids got hold of the story and I’m sure she was a lot more than simply a celebs daughter (one that most of us have never heard of anyway). If this was a drug related death it’s understandable why the word ‘Murder’ was used a few hours after the announcement. Watch ‘An Evening with Ecstacy’, if it’s still available on the BBC Iplayer or possibly on youtube. This eight part short documentary is based around the drug related death of Christian Pay at Kendal Calling in 2015 and is an eye opening thought provoking piece of TV that may carry one of the strongest anti drug messages we’ve seen for decades.

Bestival 2017 was a gloriously messy, gruelling and satisfying weekend. It was one of the worst festivals weather wise some of us have experienced but with top notch entertainment that just didn’t seem to stop.

Four nights and loads of mud, a lot of dressing up, the occasional beer for breakfast and a desire to revisit.

If the organisers of Bestival have learnt many lessons this year then the future of this festival is very encouraging indeed.

And it must surely be the big one in 2018 now that Glastonbury will be having a rest.

As long as they don’t decide to go with Coldplay, Kasabian, Muse, Foo Fighters or anyone else we’ve been watching over the past decade time and time again.