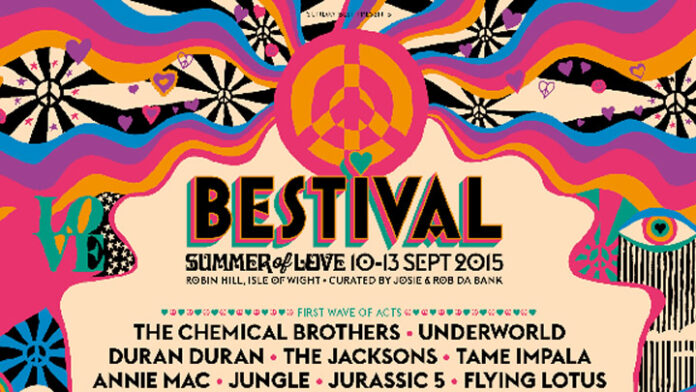 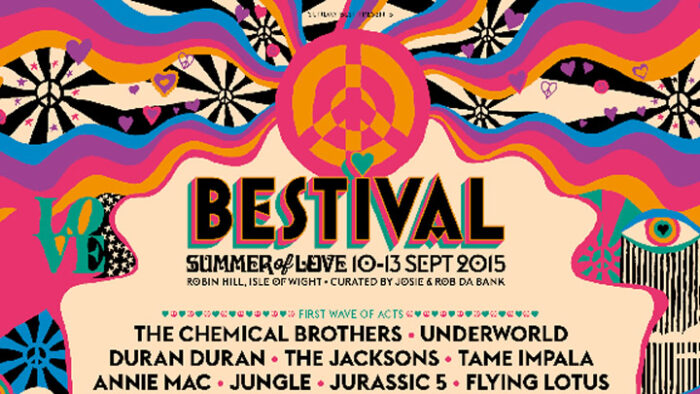 Sadly, it’s the end of the summer, which means the end of  our beloved festival season. As we round off what’s been a memorable 2015, Harley Cassidy takes to the fields of Robin Hill Park to give us the lowdown and a day by day review of Bestival.

It’s the last big party before summer ends, where the crowd are wild, free and filled to the brim with intoxicants. The hedonists retreat, Bestival greeted you with flares, gigantic disco balls and swinging jaws. No man, woman or child was safe from the constant request for you to have a good time. Whether you’re stuck in a maze, stoned, with only fairy lights to guide you in the Ambient Forest or sat watching men in drag sing It’s Raining Men at two in the afternoon, there’s no other festival quite like it. This year’s Summer Of Love theme allowed people to interpret what this deduced, leaving the end result, part-hysterical, part-terrifying. When you encounter a man dressed as Mr Blobby, you know.

To open the weekend up, freshen the pallet and prepare you for things to come, you need a band who can deal in showmanship, credibility and song-writing skills to match. Enter Drenge. Armed with a fistful of visceral songs that merge excellent choruses and face-melting wig outs into a forceful union, Rory and Eoin Loveless draw in a large, appreciative crowd for such an early start. Menacing yet utterly likeable, songs including We Can Do What We Want and Bloodsports keep the pace feral whilst battering the tide of courtly indie that continues to wash through the cracks.

Over at the main stage, where the artists are slightly more commercial and family friendly, you have the wishy-washy, pastel flavoured acoustics of Gabrielle Aplin followed by the more enduring and entertaining Lianne La Havas, whose classy yet cool demeanour gives her songs an extra kick up the arse.

Nothing could possibly match up to the sheer force of pop music’s latest ball of energy though; Charli XCX spits, chews up and stomps over the previous acts within the first 30 seconds of being on stage. “Bestival, how the fuck are you doing?!” yells Charli to a crowd of drunk, screaming festival goers and shocked parents who thought that Charli’s brat-pop would be sugar coated enough to feed to their youngsters. How wrong could they be. Essentially, she may be a platinum-collaborating pop star, but there is something so unorthodoxly punk about Charli XCX, that she appeals to far more than tweeny-boppers. 45 minutes of inflatable guitars, vulgar dance moves and intersections of expletives wrapped up in perfect pop songs and Charli XCX has sold the show.

Pond and Fat White Family bring the off-kilter demands of revellers with excellent showmanship. Both frontmen have a talent for looking completely off their tits; Nick Allbrook and Lias Saoudi respectively, drool and flail with grace. Whilst the sonic warfare of Pond trips out the crowd, Giant Tortoise being an euphoric highlight, Fat White Family entertain by being purely antagonistic, leaving Saoudi with a can to the face. Severely pissed off,  he reacts in the only way a man fronting such a luridly sleazy band can; by ripping off his clothes, throwing his bottle of Bud into the crowd and skulking around the stage.

Headliners Duran Duran are corny as fuck, but it’s quite enjoyable, especially seeing Simon Le Bon, whose foundation is so thick you can see it through the light show, try and prove his worth. Their set is filled with a rollcall of 80’s indebted hits including Girls On Film and Rio with the group even filtering in Talking Head’s Psycho Killer between songs. Dancing is compulsory and you start to realise why the group were a great match for this festival. There’s no pretences, no music snobbery, people come to have a good time and that’s what festivals should be all about.

To finish the night, you have two acts that could shit all over Duran Duran without even trying. Tame Impala and FKA Twigs, both sonically and visually stimulating in their own right, produce two absolutely incredible sets, making you wonder how Friday night can even be topped. From start to finish Tame Impala are fucking epic. Kevin Parker stands like a messiah, centre stage, looking completely unfazed. His own personal music laboratory, it’s Parker whose the real star of the night, consistently locked away, probably getting high and making music to fuel his own pleasure, it could be no higher gratification than to see huge crowds of people absolutely lose their shit to his music. Like, literally drool. Mood-altering effects, swirling synthesizers and hazy, multi-tracked vocals add to the illusion sure, but it’s the emotion fuelled behind each of Tame Impala’s albums that make them so stimulating. Where Lonerism was dark and isolated, making songs like Mind Mischief and Why Wont They Talk To Me? enthralling and intense live, the reflection and heart behind Currents make their live sets ever more expansive. Less psych and more other-worldly disco, the strut of Let It Happen, the glittering RnB of Cause I’m A Man, it all creates a bubble around the Big Top that refuses to burst long after the set finishes.

Bringing things to a final halt is one woman machine, FKA Twigs. Another artist fuelled by the love of their art, Twigs is utterly captivating, teaming her mind-bending RnB jams with well-placed dance moves and the power of a good light show. Her set is all about propensity of juxtaposition; Twigs herself is shy but her stage persona oozes fierceness, her music floats around the tent but snaps and judders back into place, the songs are menacing but are sung in a high-pitched, breathy coo. She’s so hard to place into a bracket or genre and even harder to pin-down as a person which makes her even more of an enigma. Completely mesmerising.

Keep your eyes peeled for our Saturday review!