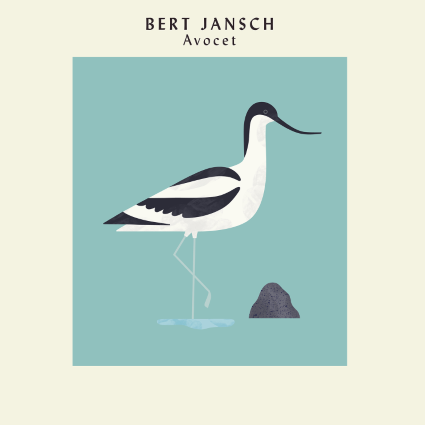 Earth Recordings continue their Bert Jansch reissue program with the excellent “Avocet” album that was first released in 1978.

Recorded in Denmark for Peter Abramson’s (Bert Jansch Danish manager at the time) Ex-Libris label, “Avocet” was Jansch’s strongest effort since “LA Turnaround” released 4 years earlier. Danny Thompson, Bert’s old colleague from his Pentangle days was back in the production seat (and on double bass) and the record features fiddle parts courtesy of Martin Jenkins who was Bert’s touring companion at the time.  Rrecorded over a two week period in Copenhagen, and entirely instrumental, the record is of course best known for its rather formidable title track, an 18 minute multi part suite that Jansch had developed by playing it live over the years that preceded the recording. In Colin Harper’s excellent book “Dazzling Stranger” fiddle player Martin Jenkins says: “Bert really had it clear in his head how each piece could flow together with a sense of continuity, in terms of key rather than tempo. I was highly impressed” and indeed what an impressive piece this opening tack is, it just ebbs and flows in a totally natural manner betraying the fact that it different parts were recorded separately.

The eighteen minutes of the tracks just fly by punctuated with Danny Thompson’s tasty glissandos, Martin Jenkin’s great violin parts and of course Bert’s superlative guitar playing. “Lapwing” a short piano instrumental played entirely by Jansch is a concise melodic vignette that shows an unknown angle of the Scotsman’s talent. “Bittern” incorporates electric guitar for the only time on the record bringing a swampy quality to the track. “Kingfisher” is probably the most immediate song on the record, driven by the violin and its bass part, it’s a magnificent piece of breezy folk music, probably one of Jansch’s five best tunes. The waltz like “Osprey” is again is driven by its violin parts (most of them suggested by Jansch says Jenkins in the book), the record finishes with “Kittiwake” and its complex intertwined guitar parts. The vinyl edition comes with six high-quality lithograph  art  prints representing  each of the birds on the album by UK  illustrator Hannah Alice. Fully interactive: the cover image is interchangeable with any of the prints, while the deluxe ‘bookback’ CD comes with 20 page book.

For further information on Bert Jansch you can check his official website: bertjansch.com and the website of Earth Recordings which is re-releasing his back catalogue. Most of the information on the Avocet recordings comes from Colin Haper’s excellent Bert Jansch biography Dazzling Stranger, an excellent read and a must-have for every person interested in the Scottish musician’s history.