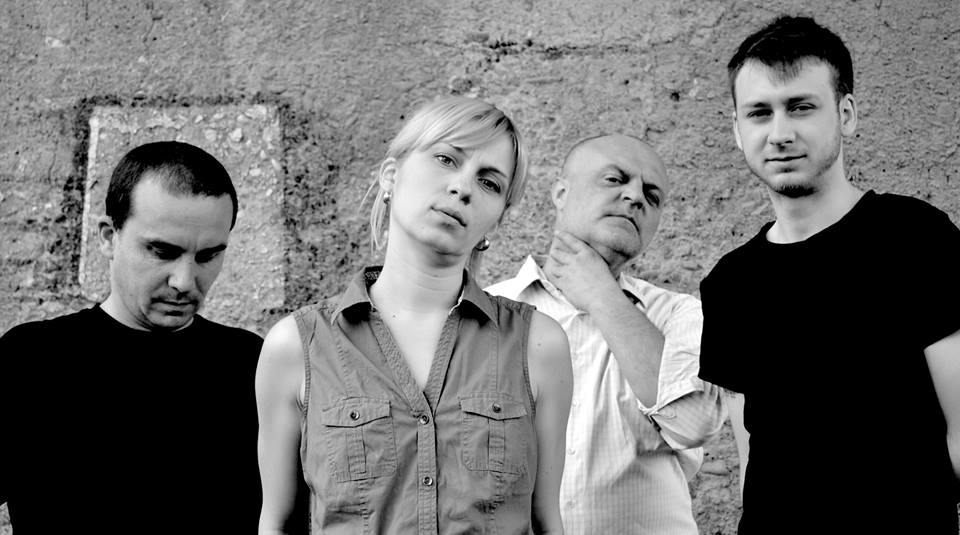 It’s snowing in downtown Ljubljana. I’m stood shivering in the MENT festival smoking tent talking to Tina and Vasko from Macedonian “post-punk” band Bernays Propaganda. (Not that I smoke, the fags tent is just the best place to grab as they seem to live in there). Sharing some similarities with their Serbian allies and Moonlee labelmates Repetitor, Bernays Propaganda are a tough live band who seem to revel in living on the road. The old line up was a four piece of considerable power and presence. I’ve seen them carve up rooms with their sheer attitude alone. At one show in Amsterdam they frightened the life out of a bunch of hip squatters, Tina almost chasing them round the gigspace. Now they are heading out in a new direction as a three piece, with a synthesizer-driven sound. This sounds most unlike the Bernays I’ve come to know.

But then, Bernays do everything from the hip. There is no real sense that they pay any attention to what others – especially those in the music business – think of them. For one, Vasko and Tina are – on the face of it – the most unlikely alliance. At first meeting, Tina keeps her distance, and wryly interjects into the conversation when necessary. Vasko, a bundle of energy who seems to know everyone in the Balkan peninsula, rounds people up like a sheepdog, pinning his subjects to a corner of a tent whilst he talks, laughs and smokes incessantly. I first met them years ago in Amsterdam over a distro box, via Koen ter Heegde from Subroutine Records (who also, via his booking venture, “Yugofuturism”, brings bands from the Balkans into western European gig circuit.) Vasko is a scream, constantly going off on rants about football, violence, politics and rare LPs. Once Tina opens up, she can also hold court like few others. After Vasko has finished lecturing LTW’s very own John Robb about The Membranes (a sight I would not have missed for the world) we decamp to the sofa in the Kino Siska, where we can talk.

LTW: Bernays Propaganda tour a lot. You seem to never leave the road, and play hundreds of gigs a year. Do you like the lifestyle?

Tina: I would not trade my lifestyle for anything else! Even with all the sweet and bitter crises in this band. I’ve always admired troubadours, not office “plants”. I’m a 32 years old unmarried, unemployed professor of philosophy and logic. The strongest logic [sic] I can find [in my life] is the choice of playing music and telling stories on the road. Like most of the musicians, I’m bad at mathematics and I’m not satisfied with one-on-one communication, but I have this sick megalomaniac need for 1:10000-type conversations. I have a need to tell my story to more people and verify if the pain in my village correlates with the pain in a random Belorussian village. Tours are perfect for people who do not own private property or the warm feeling of “home”. It makes the packing bags easier.

Back in the day, spreading the word.

LTW: Bernays Propaganda have an explosive reputation live. I’ve seen you (especially you, Tina) really take on audiences. You can scare audiences and Tina seems so angry sometimes on stage. How did that come about?

Tina: Hahaha… Are you suggesting that I should transfer to singing in a metal band?!! [Laughs] I don’t believe that my naïve face can scare someone but I promise I will practice the power of “baby face” more so we could play more kindergarten matinees… I suppose the explosive reputation of our live performances comes from the fact that we do not calculate much, we try to play with the same passion for 5 people as we play for 500. Our approach is not selective or elitist, so we rarely underestimate any concert.

New sounds, and new ways to kick off

LTW: Your new LP (Politika) is much more melodic, and poppier in sound than the previous ones.

Tina: On the surface the record is much more soft, mellow and poppier, but the main ingredient, the “poison” that is hard to sell to the pop masses, is in the lyrics. The great Slovenian artist Marko Brecelj gave one of my favorite descriptions of our band: caramel candy with a stone in the middle. It looks sweet and gentle, but it can break your teeth (in the most poetical way…[Smiles] We sing ballads coming from the social bottom and the majority would prefer a “lemonade” not a weeping song after a shitty day at work, because they’ve already got their dose of frustration. I agree that sonically, our new songs have more radio friendly, pop potential, but if a pop band names a song “Poltics”, or “Army” most probably that would be a swan song for their popularity.

Tina: We are prepared to gamble.

(Here’s Marko Brecelj with a wheelbarrow full of money.)

LTW: You always had really solid, tough songs, for example VIP In Paradise, Bone To The Dog… but even with reflective tracks, like No Translation, they sound like songs that were written on the road, for playing live, if you know what I mean. They had that live “urgency”.

Tina: Songs like VIP in Paradise have the prefix “urgency” probably because in the time when we wrote them we were obsessed with touring and we wanted to speed up and compress the writing / recording process so we could go on the next tour.

LTW: This sounds like a record that’s been slowly built up in a studio. Is that fair?

Tina: You are definitely right that the last album is a result of a slow and not-so-frantic biorhythm of creativity. Is that fair? To be honest it’s is fair, not always pleasant, but fair.

LTW: And why no drummer now? You used to be a classic four piece band. Now it feels the whole rhythm of the new songs is driven by the fact that, there is no rhythm section! What happened there?

Vasko: Life happened, my dear friend. [Smiles]. Everyone chose its path but at the end of the day most important thing is everyone to be happy and hold their hand while dancing the dance of world’s peace. And of course there is a rhythm section on this record and it’s more complex than in the past. Deni Krstev (who played drums) did rhythm programming and Sasa Pavlovic played bass guitar on most of the tracks on this album, so at the end of the day rhythm section “happened”. A happy end!

LTW: I’d be interested to know who you all listen to. I think you have eclectic tastes, I seem to remember buying a Mythos LP from your distro box once, it’s not every band who carries Mythos LPs round Europe.

Vasko: Yeah, I remember that when you bought that record from my small distro box. Ok, I agree that not so many bands carry kraut around but also not so many people could recognize it and imagine, buy it. Sure we have eclectic sound, it’s the 21st century man and we are true punks, we don’t belong to the flock, we are free people which are not afraid if some social club says that we changed. We will say thanks to them and continue listening all kind of music from the whole world, from the whole time and all possible eras and genres.

LTW: You are a political band. The name gives it away. Tell us about the story behind your name?

Vasko: Of course we are a political band, because everyone is political. We understand politics as a way of organizing life and as a responsibility to take part in it. Politics is not just a vote for some rich dickhead, or pretending that everything is done, or thinking “we are the smartest”. Actually the concept behind our last record Politika, which means politics, by the way [laughs] was a female perspective on politics. Speaking about the band’s name, just google Edward Bernays and Propaganda and you’ll see it and you should read it. Hell really exists, but on earth. 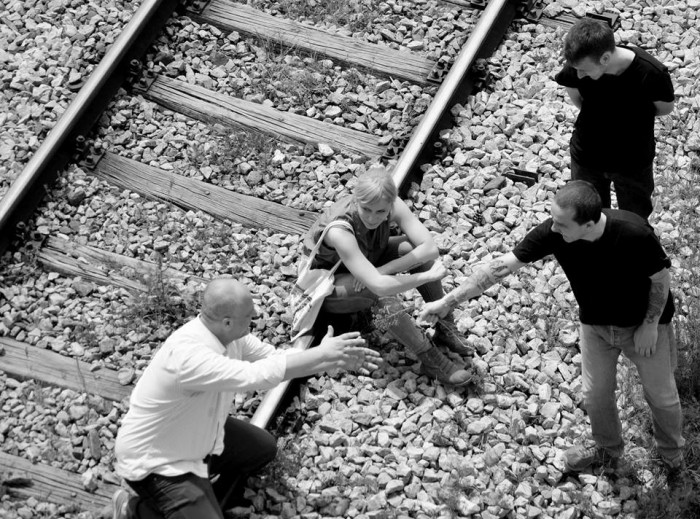 LTW: What happened last year with the political situation in Macedonia?

Vasko: A bunch of things, dear amigo. It’s a funny and bloody battle between fake social-democrats and fake democratic-christians. You can give them the same profile, actually; thieves. They are robbing the rest of the population. Also, the mainstream Albanian political factions act like they don’t live in this country, so when you’ll take all this together the story is sad. But that’s their story which is driven by the foreign embassies of foreign, imperialistic countries, and our story is quite different [on the ground] since we want peace, the same as 90% of the Macedonian, and the world’s population.

LTW: Is it really true you stopped a plane at take off to ensure Arnold from The Ex didn’t go to
the wrong country?

Vasko: Haha…you should ask Arnold to answer that. Let’s keep this story as part of a modern r’n’r mythology…

The gig – in Menza pri koritu an old (now prettified but still cool) part of a famous squat complex in downtown Ljubljana is typically intense, but in a totally different way to their old band. The metronomic beat the synth kicks out sets the tone and weirdly enough seems to give the band more room to breathe. The guitars are more rounded, and fatter in sound and there’s more space to explore. There’s a Gothic/Killing Joke element to Vasko’s guitars too, it’s somehow very satisfying in a way I wasn’t expecting. In addition, Tina seems to set up her psychodramas with more feel for the songs themselves rather than the room in front of her, which lends a whole new side to their gig. Pulling off ballet-dancer moves over old fifties film clips, Tina is the focal point as the audience slowly gets sucked into this melancholic, tough-but-sensual sound. It’s impressive, and not expected. Afterwards (as if to right the balance) there’s a singsong on a bus and a bottle of rakia in the hotel lobby. If only life was like this all the time.