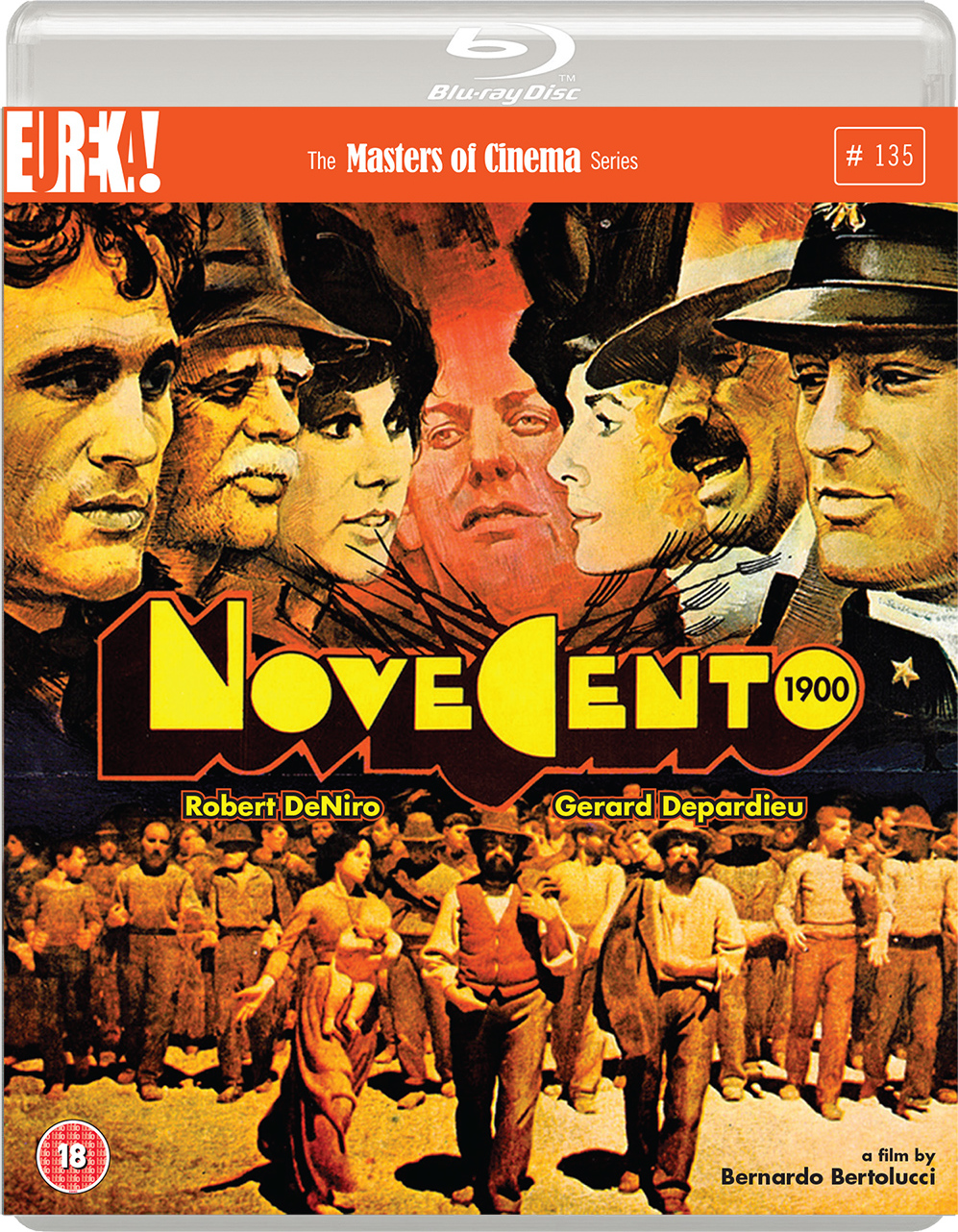 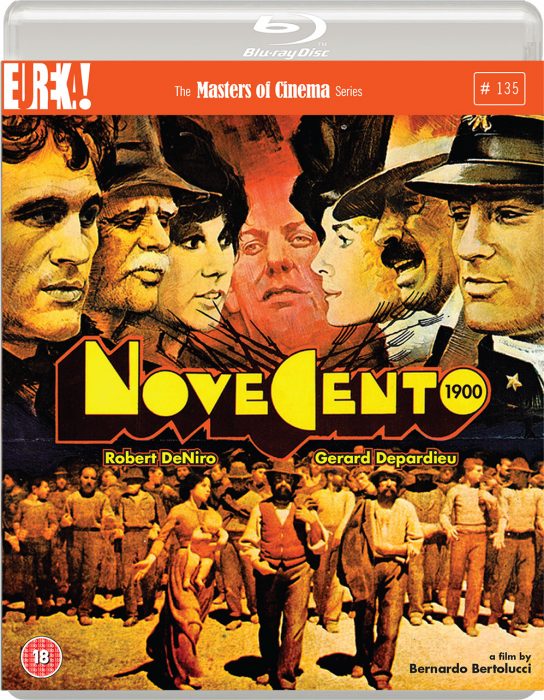 I’m currently re-reading Peter Biskind’s Down and Dirty Pictures, a book with a few pages on Bertolucci’s Little Buddha, a film snapped up by Miramax for distribution in North America. Miramax bigwig Harvey Weinstein wanted to drastically cut the movie but Bertolucci, who was perfectly happy with the length of his work, had wisely insisted on having the final cut in his contract. Weinstein, infamously nicknamed Harvey Scissorhands due to his habit of having films edited down for the sake of commercial viability, said later: ‘I couldn’t get Bernardo to cut his hair, much less a frame of his film.’

Bertolucci had faced even greater concerns with his epic, 1900. At one point during post-production, he was even banned from the editing room by producer Alberto Grimaldi and he later slammed the 195 minute cut shown in the States as ‘a travesty’.

1900 has existed in a number of versions, the director’s favourite and the one presented here by Eureka! being the longest, stretching to a marathon five hours and fifteen minutes (divided into two acts on two separate discs). Originally envisioned as a six part series for Italian TV, the shoot itself lasted over forty weeks and it’s little wonder then that legendary critic Pauline Kael claimed 1900 made most other films ‘look like something you hold up on the end of a toothpick.’

Boiling down the plot for you, 1900 is the intertwined tale of two childhood friends, both born on the same day early in the century, from their births through five decades of often fierce class struggle in Italy.

Alfredo returns from fighting in the First World War to find a new foreman, Attila Mellanchini (Donald Sutherland) in charge of the workers on his father’s plantation. Not only does this character’s first name raise alarm bells (Attila by name, Attila by nature) but he is also a leading local fascist, whose idea of showing off to his blackshirted pals is to tie a cat to a post and head-butt it to its death.

1900 is far from subtle and the director clearly sides with the workers in the film so don’t bother hoping to discover any redeeming qualities in Mellanchini, in fact, his behavior only deteriorates into greater levels of sadism as Mussolini’s party gains control of the Italian parliament. 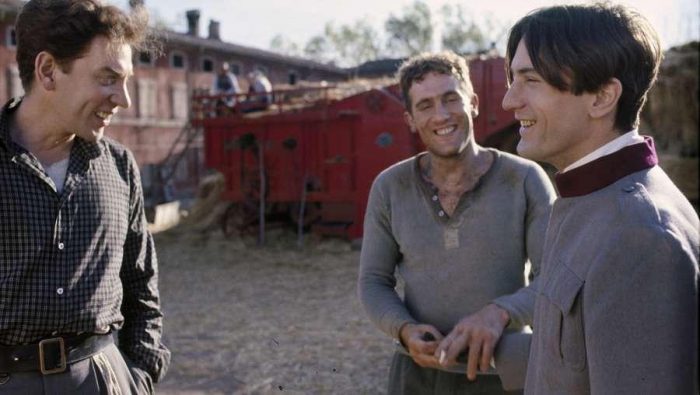 At times dazzling, it’s a shame that 1900 fails to sustain its interest throughout. The trial scene at the end quickly descends into didactic propaganda and drags on horribly, interspersed with irritating bursts of accordian music after each badly dubbed accusation against the ‘padrone’ Alfredo, although a group of peasants parading under a gigantic, red Soviet patchwork flag is at least visually inventive.

Bertolucci was a communist himself, although nowadays he believes that particular ideology is dead, reflecting in a Guardian interview in 2013 that: ‘I lived in a kind of dream of communism.’

Sadly, the final dialogue free sequence, set some time after 1945 is one of cinema’s dampest ever squibs. The two protagonists still squabbling should suggest that the class struggle continues but I couldn’t help but be reminded of the two not entirely convincing old men, Jack and Victor, from Glasgow based sitcom Still Game.

And don’t ask me about the mole that burrows out from underneath the earth!

Certain scenes will, though, undoubtedly stick in the mind: the slaying and flaying of a pig by Olmo; a peasant Van Goghing his ear; Alfredo snorting a line of cocaine and not feeling anything and – still on the subject of cocaine – a white horse with that name trotting into Alfredo’s wedding reception where it is presented to his new wife, Ada Chiostri Polan (Dominique Sanda). There’s also a section where the two young men share a bed with an epileptic prostitute that’s initially funny and then deeply disturbing.

There are some superb acting on display too. Going into the film, De Niro had just delivered a trio of performances that could match any run of roles by any actor at any point in the history of cinema – namely Johnny Boy Civello in Mean Streets, the young Vito Corleone in The Godfather Part II and Travis Bickle in Taxi Driver. Here though, he is eclipsed by Depardieu and Sutherland (although the ageing of the latter failed to convince, his forehead being too high and too smooth to be realistic). The young actors are both impressive and the two grandfathers from the first half of the film, Burt Lancaster and Sterling Hayden, also shine.

Also worth mentioning is the cinematography of Vittorio Storaro, which is consistently wonderful and Ennio Morricone’s score which, while not being his absolutely finest work, is in places a joy.

Is the film too long? Well, although I tend to side with the vision of a director over the moneymen, on this occasion I would have to answer yes, and if given the choice to watch it again I would likely choose one of the shorter versions although I am glad to have finally watched the saga the way the director intended it to be seen.

Extras include two video pieces featuring Bertolucci and an hour-long on-set documentary about the making of 1900 as well as a booklet featuring a couple of interviews with Bertolucci, archival imagery, and more.