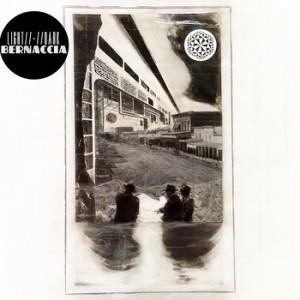 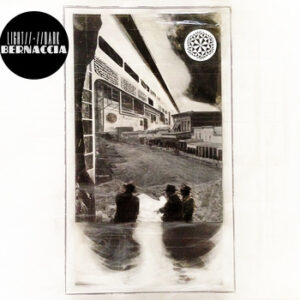 By their own admission, it’s been a great year already for Bernaccia. They’ve supported Royal Blood in their hometown of Newcastle, played at the Evolution Emerging festival and released the fine Cinema EP.

They show no signs of relenting as the new EP, Light//-//Dark is thrust upon the public. Four new tracks, each one as good as the other, combine in another powerful mini-collection of brooding psychedelic blues with a touch of good old rock ‘n’ roll thrown in for good measure.

Opener, Street Life, sees the lads on top form as the drums roll over Jonny Noble’s deep menacing tones as guitar and bass combine to bring you a startlingly great track. With slight wisps of Ian McCulloch, Noble’s voice is a powder keg ready to blow, the closing harmonica does nothing but add to the tension and a formidable EP is off to a roaring start.

Darkness Walks immediately goes for the 2014 award for best throbbing bass, almost distorting amidst a superb blues underbelly and Jim Morrison-esque echoes. A gentle keyboard arrives as if to bring some calm to the Bernaccia storm which only serves to whip up a hurricane and pound on harder and further.

The EP closes with two tracks featuring vocalist Ellen Chetchuti adding a serene feel firstly to Blue Man which begins with the sound of native American chanting. Chetchuti has a voice which is both gentle and gravelly adding more kudos to the band’s sound. Closer, Manifest, starts with spaghetti western whistling and rolling drums before picking up the pace and moving into familiar territory. Guitars announce their presence with the confidence that this young band possesses in abundance.

For the second time this year Bernaccia have released an EP of superb quality and professionalism and an album from them is the sort of stuff that dreams are made of.