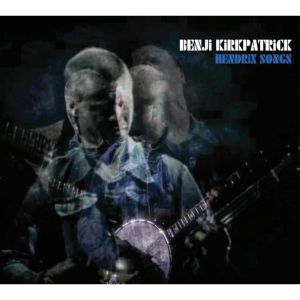 Benji Kirkpatrick is one of those  ‘go to’ men in folk/acoustic/roots circles when it comes to plucking away at anything stringed. From Bellowhead to Faustus, solo and beyond, his distinctive guitar, banjo and bouzouki adds colour and texture to many a song or tune, yet with his new solo album, he’s chosen to take on the guise of ‘Bendrix’,  head to a place where only the courageous dare venture and undertake a task where braver men have crumbled – the songs of Jimi Hendrix.

And there’s the rub, so let’s get one thing clear about Benji Kirkpatrick’s ‘Hendrix Songs’ so as not to confuse any possible misinterpretation –  the operative word being ‘songs’. For a start there’s no guitar. Admittedly, Jimi wasn’t too shabby on that instrument so there’s no way Benji is going to try to emulate or even interpret him on that count. In Benji’s own words – “to copy him was futile.”  Neither does he  play it left hand like Jimi (or Ziggy for that matter) despite being left handed (apparently turning up at his first guitar lesson and finding himself ‘turned round’ to play the correct way). Nor does he play with his teeth, behind his head or set fire to any of his precious instruments, not publicly in any case.

The aim is much more simple; to expose the Hendrix songwriting skills and take them back to a rawer form, almost back to basics, as well as exploring the more gentle side of Jimi Hendrix, performing purely on acoustic instruments. Stripped back from the any excess,  not only do you get the ‘hits’ but a nice selection of things like the b side (for those who remember what that is)  ‘Stone Free’, which sees the chorus  delivered in a lounge jazz style, from someone who’s clearly a fan cum aficionado.  Similarly, ‘Burning Of The Midnight Lamp’ is perfect choice to illustrate the aim behind the project – a melancholy and introspective piece to begin with, the simple arrangement brings the atmosphere and sentiment right to the fore.

While there’s no  ‘Hey Joe’ or ‘Are You Experienced’ there’s enough of the familiar alongside the smattering of lesser  known gems. And what a treat it is to hear the banjo knocking out a rootsy and bluesy backing for ‘Voodoo Child’ whilst the most un-Hendrix like bouzouki comes to the fore for ‘Red House’ (probably the only place where Benji concedes to really letting rip)and ‘Purple Haze’; the latter shifted from a psych rock tour de force to  a bouzouki masterclass with a relaxed vocal on the “purple haze, all in my brain” line rather than Jimi’s “p’ple haayze” slur. In fact listening to some of the vocal inflections is quite fascinating – in particular how many will scan straight to the immortal “’scuse me while I kiss the sky” line to see how Benji has dealt with a classic rock moment. Talking of which, winding up the album is ‘Little Wing’ has been covered by many bands from The Corrs to Sting and Def  Leppard and it’s quite the song to close the album as an acknowledgement of its worth as a quality song and as one which really captures  and signs off with a clear message about the whole  purpose of the album.

For those who might ultimately baulk at the fact that “it’s not Hendrix!” you do have to admit that sometime only Jimi’s version will do – for ‘Foxy Lady’ you can’t quite see Garth Algar shimmying up to his dream woman to the strains of Benji’s version (“if you spew and she bolts, it was never  meant to be”) but the true fans will appreciate and embrace the  intention.

Released 45 years to the day after Jimi’s death, look out for the graffiti starting to appear: “Bendrix lives!”