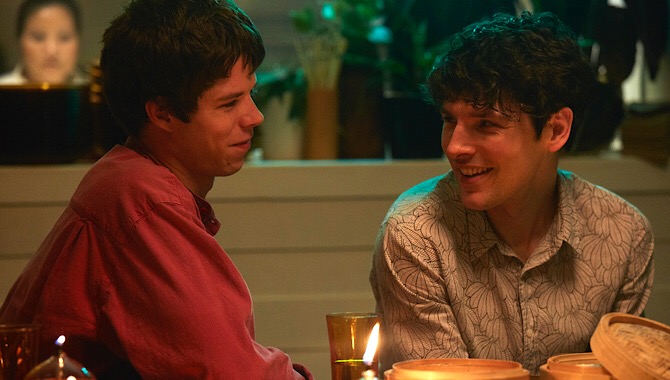 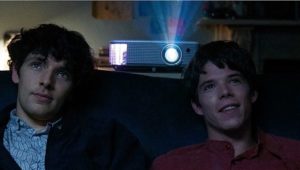 Benjamin is on general release in the UK now

In Simon Amstell’s cinematic debut, a rising filmmaker is jettisoned into the uncertain waters of a new relationship as his second film is due for release.  Lee Ashworth finds promise in an affectionate portrait of honest, clumsy young love.

Running through the suburbs of London, this film is a thread.  It weaves between film studios, apartments, parties and screening rooms.  It gets caught in restaurants and snagged in bars.  We chase the threads as Benjamin (Colin Morgan) runs on ahead of us, chasing himself, trying to finally catch up with who he is, tapping himself on the shoulder and looking himself squarely in the eye.  In the final lingering scene, maybe we catch a glimpse of who Benjamin is, just as he does too.  His expression evolves in close-up, mouth curling and eyes sparkling, as effortlessly as the shadow of a cloud passing over a hillside at speed, altering the light.  We are left to infer the precise nature of the thoughts passing through his mind.  We find Amstell’s accomplished offering in gaps such as these: in the cracks between dialogue and performance, between movie and audience – this is where Benjamin invites us in.

Benjamin explores the intensity of a new relationship and its all or nothing early immersion.  As soon as Billie, Benjamin’s publicist, introduces him to Noah, the charismatic French singer at a party, they become magnetised, lost in each other.  But as well as the intimacy, however frustrated, dislocated or fleeting, between the main characters, Benjamin is also intimate in terms of its scope.  The locations are mostly domestic and far from extravagant, coupled with glimpses into the film industry that avoid glamorous connotations.  At one point, Benjamin finds himself at the launch of “a chair” and later at a performance art event, but we see these happenings through his bemused and mildly detached perspective and so, through our empathy with him, the audience is never truly immersed in London’s media world, it is instead objectified and held at bay.  The camera lingers on the faces of the cast and we see the minutiae of their reactions as we are drawn in, closer towards Benjamin’s inner world.  In eschewing more grandiose cinematic gestures, the fact that this is Amstell’s first film and only the fourth of Open Palm’s six features so far, this feels like an aspiring, fledgling enterprise, but that’s part of its charm.  There is an innocence and integrity in Amstell’s work here, reflected in the beauty of his character studies, that lends conviction to what could otherwise be a too-slight tale.

In the portrait of intimacy, in the gentle humorous self-effacement of the protagonist, in the awkwardness of love and desire and the pervasiveness of something less edgy and more suburban, more middle-class perhaps… Benjamin is infused with the spirit of Woody Allen’s films from the 90s and early noughties.  Going back further to the likes of Purple Rose of Cairo, Benjamin explicitly and implicitly juxtaposes life on the big screen with real life.  The tension between fantasy and reality is writ large, although despite portents of heavy-handed symbolism it is skilfully articulated by depicting the central character as a filmmaker.

You may feel that you’ve seen aspects of this film before in the range of movies by Allen in his former glory, or even Richard Curtis, though that doesn’t spoil the enjoyment, and it still feels liberating to see a story that  features a gay couple at its centre.  Amstell says that Benjamin began with notes for scenes based on several of his own past relationships and it is well documented that he draws heavily on his own personal life.  Everyone is channeled through their own work to some extent of course but it is perhaps more apparent in some of the obvious parallels between Benjamin, played brilliantly by Colin Morgan, and Simon Amstell himself.  It is certainly exciting to see what he produces next, but a criticism of Benjamin might be that it is at times too safe.  Can he go further?  Can he unleash more of his creativity?  Could we have more intimacy, can we journey further into the interior of these intriguing characters, can we pursue the Fellini-esque insertion of surreal cinematic imagery into the characters’ real lives and can we explore further beneath these suburban surfaces?

Benjamin is a charming and intriguing appetiser that left me wanting more.

Check out the trailer for Benjamin here: