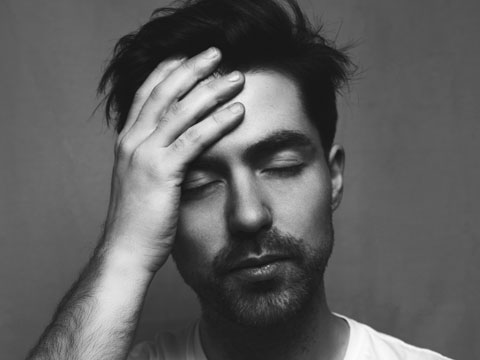 The Encounters Short Film Festival which is held every year at the Watershed hosted an event just across the harbour’s water at the Arnolfini gallery last Friday featuring big screen electronic performances bluring the lines between sound and image, cinema and club. Philip Allen was there to experience the sublime.

When it comes to obsessions; Cinema and Music are two of the most loved fixations and this includes me, and with Welsh-born, Berlin-based Techno maestro, Benjamin Damage headlining the evening, it was one not to be missed. I had a vision of the entire Arnolfini gallery being taken over for this event, turning the normally subdued, brightly lit spaces into darkened enclaves absorbed by the blink and flow of huge colourful screens of visual stimulation.

Of course this wasn’t the case. Despite these delusions of grandeur, the Arnofini’s ground floor auditorium made the perfect environment for the night’s collaborative efforts. Laid out in front of the decidedly large cinema screen stood tables filled with all the performers audio and video equipment. As I arrived oh so fashionably late, I entered the space to find Konx-Om-Pax; The hallucinogenic musical project of Glasgow-based graphic artist Tom Schofield entertaining the faithful as they sat on the floor surrounding him as tweeked various hardware. Lasers shot over our heads and into our eyeballs as intense visuals flew off the screen. The atmosphere of his work brought on feelings not too dissimilar to a DMT experience and not the easiest to put into words. Safe to say, it felt as if I needed to rebalance my senses as I left the room after his impressive set.

Next up, COH, pronounced “son” is the pseudonym of Ivan Pavlov, a core member of the raster-noton collective & Tina Frank seduced us with their pulsar excursions, modulating live video feedback. Linked through a ‘synchronator’ device, translating audio frequencies into RGB frequencies to incredible effect. Soothing yet stimulating, the crowd fell under their spell. There was a palpable intense connection the two artists during the performance, intently watching each other and smiling, indicating and directing the tension between the music and the visuals. Dreamy.

Benjamin Damage’s collaborative partner for tonight is Bristol based AV artist Panther Panther! There is a slight delay as computers are rebooted, but as soon as Benjamin kicks in the beat with his new hardware set up, the crowd are up and getting down to some of the best produced techno I have ever heard. Dropping tracks from his 2013 release, ‘Heliosphere’ s and his superb collaboration with Doc Daneeka, ‘They Live!’ Everyone in the place found their floor and head space to dance hard for his hour long set. This events unconventional surroundings made for an interesting merging of sound and vision, art and music while Panther Panther!’s immersive and fun visuals help make this night one of the best I have been to in quite a while. Whilst it wasn’t quite what I expected, I was left satisfied and elated to have witnessed such talent.