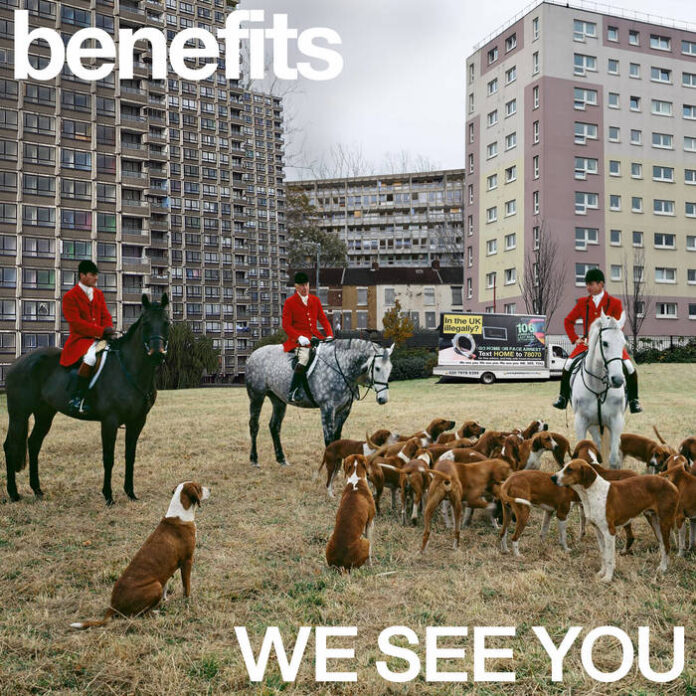 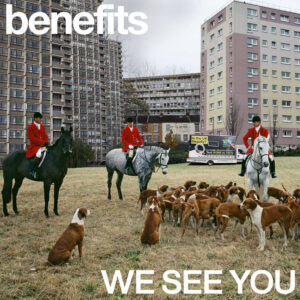 Benefits: We See You

The latest raging rant from the brilliant Benefits, We See You tackles nationalist nonsense with the same intelligence and pure vitriol we’ve come to expect. Andy Brown shares his thoughts for Louder Than War.

“Arrogance, atrocity, bloodshed, bullshit/ There’s nothing great about that Mrs Britain” spits Kingsley Chapman as he turns his gaze towards Britain’s colonial past, “Did we ever apologise? / Did we fuck/ Just wandered off, had some tea”. With a string of increasingly urgent singles the Teesside-based collective have managed to capture the public mood or at least that section of the public that are sick to death of the Tories, flag waving nationalism, re-written history, corrupt police and Brexit fuelled racism. Like a lot of us, Benefits have a lot to get off their chests.

The music on We See You is as sparse as it gets, a two note electronic pulse and a simple, understated drum machine beat. Kingsley’s voice is pushed into-the-red and kept high in the mix throughout; the overall effect akin to having him scream the words directly into your spit-speckled face. The rage and disgust you feel every time you glance at the latest dim-witted Sun headline unambiguously articulated and delivered by the love child of Crass and Sleaford Mods. Comparisons to the Mods seem somewhat inevitable yet there’s something far more direct and confrontational at work here.

Chapman delivers the words in the style of a particularly pissed off performance poet, each line designed to dissect and dismantle the ugliest aspects of modern Britain. A land where “filters mask the homeless” yet “everyone claps/ everyone cheers”. Nationalism, Britain’s shameful Empirical past and lying politicians are all in the crosshairs this time. A defiant middle finger to our spiteful Etonian overlords “brimmed to the tits with hate”. Each brutal, unfiltered image feels depressingly familiar yet this isn’t music to wallow in. Everything Benefits do feels like an urgent call to get angry, get motivated and do better.