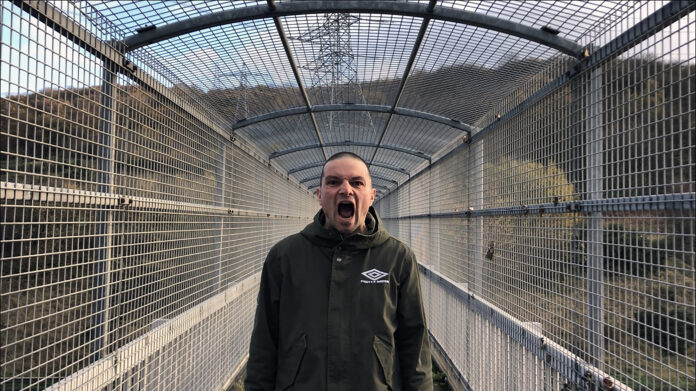 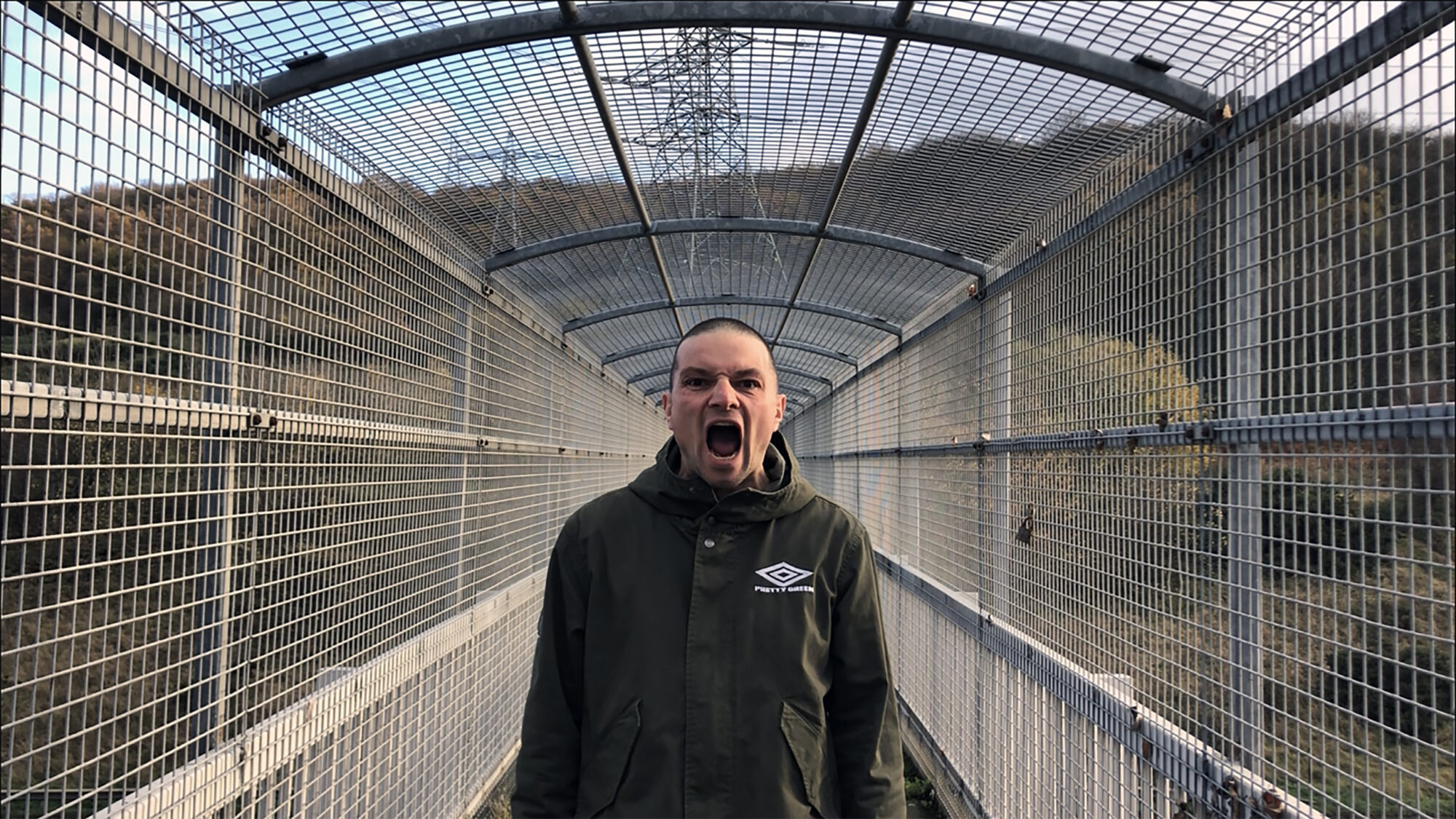 Benefits bring noise and fury to the iconic Brudenell Social Club in Leeds. Andy Brown shares his thoughts for Louder Than War.

It would be fair to say that vocalist and throat-shredding punk poet Kingsley Hall has a way with words. It’s Hall’s brutally incisive lyrics combined with the visceral nature of the music that are creating a sizable and ever-growing, word-of-mouth buzz around Benefits. Having released the uncompromising Empire back in August, I’m keen to find out what the Benefits live experience has in store.

The evening starts with a superbly surreal set from M-G Dysfunction. Like some anarcho-punk Westlife covers act, Fred Mikardo-Greaves sits atop a barstool to deliver a bizarre power ballad. Raising his middle finger in the air as he defiantly croons, “fuck the boys in blue”. Surrealist hip-hop, melancholic drones and a chant about jungle music soon follow. He gently nudges us out of our comfort zone with an increasingly unpredictable set that feels like some kind of performance art. A brilliantly uneasy atmosphere lingers in the room. Questioning whether his music is actually any good, M-G Dysfunction storms off and leaves us to our confusion. I for one, love every minute.

With two-thirds of the mighty Bilge Pump included in its number, tonight’s second act was always going to be something of a treat. The poster simply (and accurately) lists the three-piece as, A New Band. Joe O’Sullivan’s explosive, feedback-drenched guitar work blends beautifully with Neil Turpin’s frantic and intricate drumming as Claire Adams slides into the mix with limber, post-punk basslines. Perched on her tiptoes Adams sings about “feeling seasick” as the three-piece get into their collective groove. It’s an apt description of a sound that bobs and weaves like a tiny boat on a stormy sea. The journey is fraught with danger and more than a little excitement.

Failyer is a similarly new yet experienced act as the three-piece feature members of garage-goths Hilary And The Hate Crimes, jazz maniacs Two Minute Noodles and post-rock goliaths That Fucking Tank. The band shake, sneer and snarl through a satisfyingly cynical set of gothic synth-pop. I’m using ‘pop’ in a relatively loose fashion here. “We’ll sever your thumbs and boil your phones” they croon on the deliciously dark Snowflake. An appearance on a seasonally sentimental John Lewis advert feels pretty inevitable at this point. A gloriously cantankerous set that culminates with the Daily Fail baiting catharsis of Winston Churchill Disneyland.

An ominous drone kicks in and Benefits are ready for business. “Don’t be fooled again and again and again” screams Kingsley Hall as he stands defiant in the centre of the sonic maelstrom, “question everything!” It’s a lyric that captures much of the Benefits ethos. This is a band and lyricist looking to push buttons, provoke and inspire. It’s easy to look away, scrolling past the latest horror show on your phone and absentmindedly clicking on a video about cats. Yet there’s clearly a lot to be angry about. It’s that rage that’s being channelled on stage tonight at The Brudenell Social Club.

Benefits are certainly not for the faint of heart. The band creates an overwhelming wall-of-sound; a rib-cage rattling noise summoned up by synth players Robbie and Hugh Major. Jonny Snowball divides his time between drums and thick, satisfyingly filthy bass. Meanwhile, Hall rips into every flag-waving racist and immigrant-bashing moron. And, oh my, it’s cathartic. A performance infused with passion, anger and commitment. Every single second feels intense, exhilarating and thoroughly absorbing. “We don’t exist/we don’t resist” spits Hall on the excellent Divide And Be Conquered, “we are just statistic”. 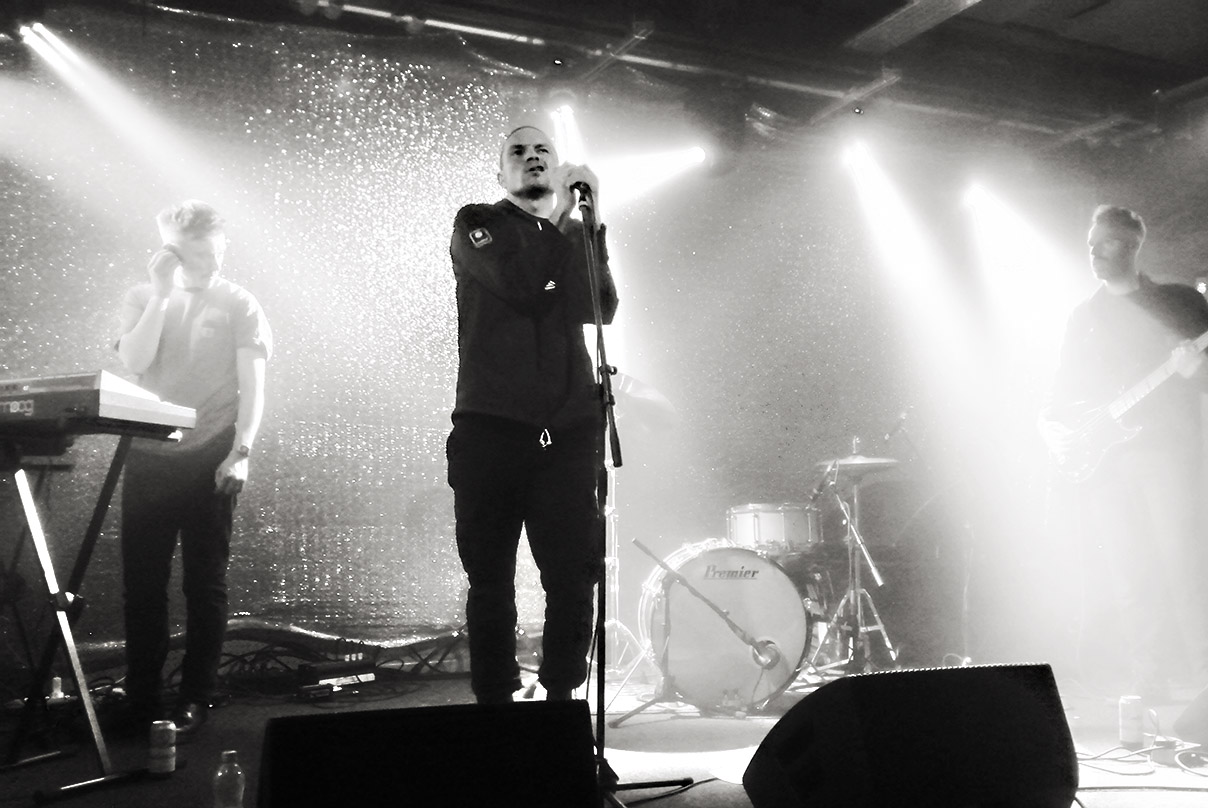 Britain’s descent into Brexit, the rise of the far-right and decade-long Tory rule provide more than enough fuel for these enthralling, noise-ridden tirades. “There’s a newfound spring in your goose step” quips Hall on the rather self-explanatory Shit Britain. With its all-encompassing wall of harsh noise, Empire is certainly one of the most brutal songs to be released as a single. A black hole of sound and fury that I’m more than happy to fall into. There’s no room for nihilism though; Benefits are angry and ready for change. As Hall yells on the explosive Flag, “we deserve better than this!”

A mangled, car crash of noise complete with full-throated screaming and brutal drumming; Traitors somehow manages to turn the intensity level up even further. Suffice to say, it’s an utterly glorious moment. They send us on our way with the propulsive and incendiary, Taking Us Back. People are going to be talking about tonight’s gig for a long time. Benefits go on tour next year. Don’t miss out.