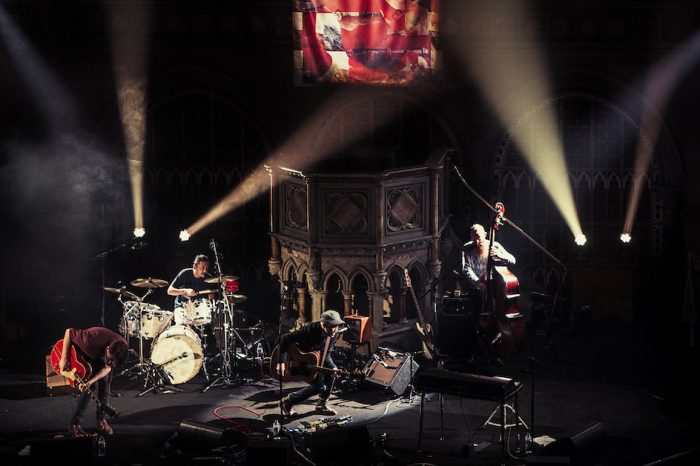 This rather magical evening at Union Chapel could somewhat be seen as the culmination of Ben Watt’s comeback as a musician and songwriter, a journey that started in 2012 when he was composing the songs for “Hendra”, his first solo album in thirty years. Michele’s opening set where she was backed by a guitarist who doubled on vibes was simply magical and perfectly suited to Union Chapel’s surroundings. Promoting her recently released “Pieces” LP, her set culminated with a rather fantastic rendition of “Just Anyone Won’t Do”.

Ben Watt’s comeback as a solo artist’s has been quite a success. Two great records released in the space of two years (“Hendra” and “Fever Dream”) both recorded with former Suede guitarist Bernard Butler saw him prove that his songwriting skills hadn’t suffered from the decade sabbatical imposed by his activities as a DJ and label owner. One can even say that this sabbatical rejuvenated him and that his new material was enriched by an extra ten years of life’s experience might be his strongest yet. Jumping back and forth between tracks from his two LP’s, Watt also included a few older songs (“because I know you like the older stuff” he mischievously added). Starting as a duo with bass player Rex Horan on the bossa-nova rhythms of “Running With The Front Runners”, Watt was then joined by drummer Mako Sakamoto and Bernard Butler for “Bricks and Wood” from “Fever Dream”. “Young Man’s Game” was introduced as a country-song about DJing and Bernard Butler’s extended solo on “Faces Of My Friend” showed how well his style complements Watt’s songs.

“Some Things Don’t Matter” gave  its author to reminisce on “Pillows and Prayers”, the Cherry Red compilation on which this track from “North Marine Drive” was included. If “Some Things Don’t Matter” was a snapshot of Watt at nineteen years old, “Hendra” showed him in a reflective mood, the song being inspired by the sudden passing of his half sister Jennie. “Rollercoaster” and “25th December” from EBTG’s 1995 LP “Amplified Heart” were rare excursions into his former band’s repertoire (both choices made after much soul-searching) while “Gradually” and “Nathaniel” saw Butler’s incisive playing the fore again. One of Hendra’s masterpieces “Spring” was revealed to have been inspired by a Bill Evans album title, and by the need for a brighter moment to lighten the rather dark subject matter of “Hendra”.

A standing ovation greeted the band after the last notes of “Fever Dream”, pushing them to come back for a three song encore that included a solo rendition of “North Marine Drive” , “New Year of Grace” and the excellent “Forget”.

Photo by Chris Almeida. More work from Chris can be found at her official website: www.chrisdalmeida.com.