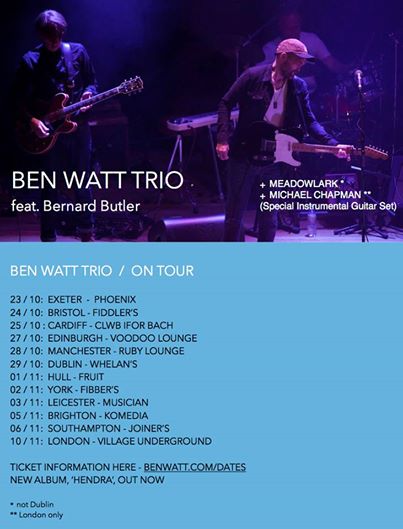 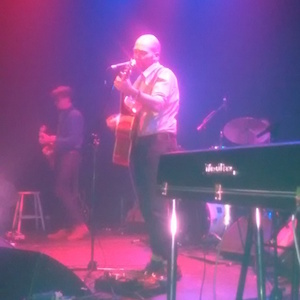 After twenty years as joint singer-songwriter and primary instrumentalist in Everything But The Girl, and ten as an international DJ and label owner with Buzzin’ Fly, Ben Watt returned to his singer-songwriter folk-rock roots in April this year with an acclaimed new solo album, Hendra. He’s currently touring said album and for Louder Than War THEARTYASSASSIN reports back from the opening date last night.

At one point tonight, Ben Watt talks of his songs as those of innocence and experience which is totally fitting for what unfolds: intelligent enough to know he is referencing William Blake and self aware enough to know the album he made at 19, ‘North Marine Drive’, is the former whilst the 51 year old’s second album ‘Hendra’ encompasses the life, and near death, experiences of the latter.

The set opens with the title track of the new album and immediately the chemistry between Watt, guitarist, Bernard Butler, and Everything but the Girl drummer, Martin Ditcham, is apparent. Both are restrained in their playing and allow Watt’s voice and lyrics to shine. Never has Butler been better. In Suede, he was an arrogant showoff, here he is all subtlety and nuance. Watt is communicative about his songs and reveals numerous titbits;  ‘Young Man’s Game’ reveals insecurities about being a club DJ at his advanced years for instance.

The second song is counterpointed by an anecdote about being an arrogant youth and asking Robert Wyatt to play on his debut album.

He is open about the conflicts between his literary career and his musical career and how one has influenced the other. There are stories about Peter Milton Walsh of The Apartments sleeping on Ben and Tracey’s floor for six months while they tried to make it in the music biz.  ‘The Levels’ is one of the many standouts tonight, but whilst [new album] Hendra is clearly the focus, he does not forget the songs of innocence.

A fantastic version of ‘Some Things Don’t Matter’, third song in, seals the deal of innocence and later ‘North Marine Drive’ (evidently a nondescript street best suited for a song title) makes my heart melt.

The set ends with ‘The Heart Is a Mirror’, a song that Watt describes as an inability for men, including him, to express themselves and a need to open up more. This is why women like me love Ben’s writing. He recognises his frailties and isn’t afraid to address them.

The final encore is a song unknown to me but one Ben says was written as Christmas song in New York for Everything But The Girl but the recording session was aborted. Needless to say, it is as fine a piece of songwriting as the rest of the gig has evidenced.

~
Remaining dates on the tour, which continues in Bristol tonight, can be found on this poster:

Ben Watt can be found online here: benwatt.com. He also does Facebook and tweets as @ben_watt.

All words by THEARTYASSASSIN. More writing by whom can be found at her her blog, THEARTYASSASSIN, where this post first appeared.  You can also find her on twitter as, you guessed it, @theartyassassin.