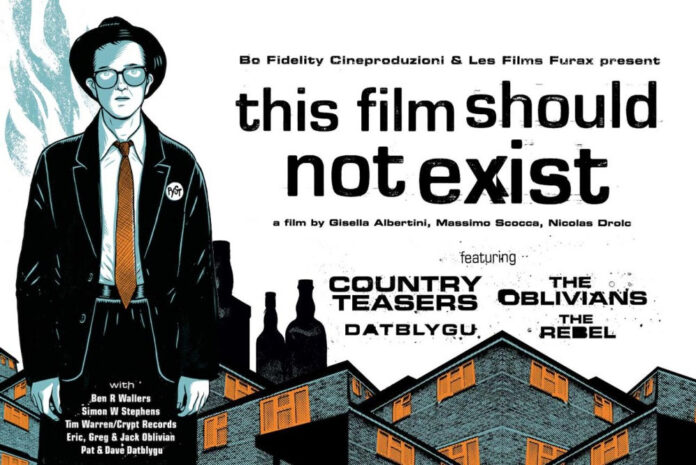 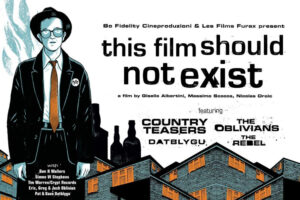 Country Teasers’ frontman, Ben Wallers (a.k.a. The Rebel), is the subject of a new documentary, This Film Should Not Exist, from Les Films Furax.

The documentary follows Ben Waller’s journey from promising pupil of one of the most exclusive schools in England to eccentric underground musician and politically incorrect, provocative lyricist: the beginnings with country-post-punk band Country Teasers in early 90s Edinburgh, the meeting with first label Crypt Records, a crazy European tour with Memphis garage-punk band the Oblivians, the relationship with his idols – Welsh band Datblygu – and his solo career as the Rebel. A humorous look at the 90s alternative music scene and a reflection on life choices, art, and freedom, and, of course, Wallers’ scandalously top-quality lyrics in which cruelty vies with delicacy in shocking but perfectly chiseled literature.

This Film Should Not Exist works a bit like a bank robbery on us. We think we’re watching a film which ticks all the right rock documentary boxes – archive footage from the orgiastic 1995 tour with The Oblivians and the Crypt label’s blessing, stories of everyday life, bitter reports on life journeys, etc. – then, halfway through and with a delicately insistent grin, the film takes us somewhere else completely to get lost in a forest.

In this way, it definitely echoes and follows the artistic path taken by Ben Wallers, this documentary’s lead character. It is the portrait of this man, an important artist, underground group leader, and genius marksman, we see before us.

The film will get its UK premiere at the Doc ‘n Roll Festival on the 10th of November at The Castle Cinema, Homerton. More information and tickets can be found here.

Check out the trailer below: