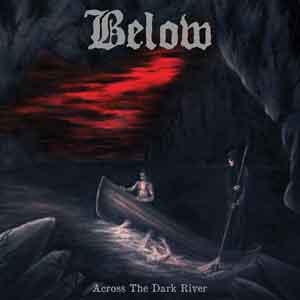 Doom metal? From Sweden? Who would have thought that?! Below continue the Scandinavian doom tradition. Hailing from Nyköping, in Sweden, this five piece doom outfit have created a quite stellar slab of epic doom. Dom Walsh reviews.

Across The Dark River is the band’s debut album, and it is a record that is completely worthy of your attention. It is hard not to draw comparisons with Candlemass. Opener, Trapped Under Ground, pays tribute to the dark and deep riffs from their Swedish forefathers. This is coupled with melody that tugs at the heart strings. Although there is a level of adoration of bands that have set the standards before them, Below show enough quality not to come over as complete duplicate of the genre.

These qualities run throughout. Ghost Of A Shepherd is an early highlight as the drums are pummelled without relent. The whole track drives at a great pace, and is backed by a haunting church organ back drop in the centre. The story of the song is sung with great emotion by vocalist, Zeb. His exultant cries adorn the opening of the slower paced, Portal. The music moves at a trot whilst the melodic vocals create a harrowing mood.

Mare Of The Night sees more impassioned vocals and more haunting melodies. There is an if it ain’t broken, don’t fix it mentality at work in the main structure of the song. The formula is perfect to a tee. The pace of Mare Of The Night graduates to a gallop towards the end before breaking out into a blazing solo towards the end. Zeb’s soaring vocals really grab your attention in the closing strains.

Penultimate track, The Whitechapel Murderer, moves along with the deep, menacing bass at the forefront of the journey. Some Halford style shrieks show more range in the vocals, as the chiming guitars are complimented with a singular chiming bell. The closing track of the album is the title track, which completes an eight song album rich in depth and variety.

Whilst Epicus Doomicus Metallicus is (for me) the king of the Swedish doom genre, Below can rightly take plaudits in their take on it. This album is epic and theatrical in its delivery and sound. The production, from King Diamond guitarist Andy La Rocque, is deep and resolute in retaining a contemporary feel whilst adding into the mix an air of nostalgia to help the album sit very well within its genre.