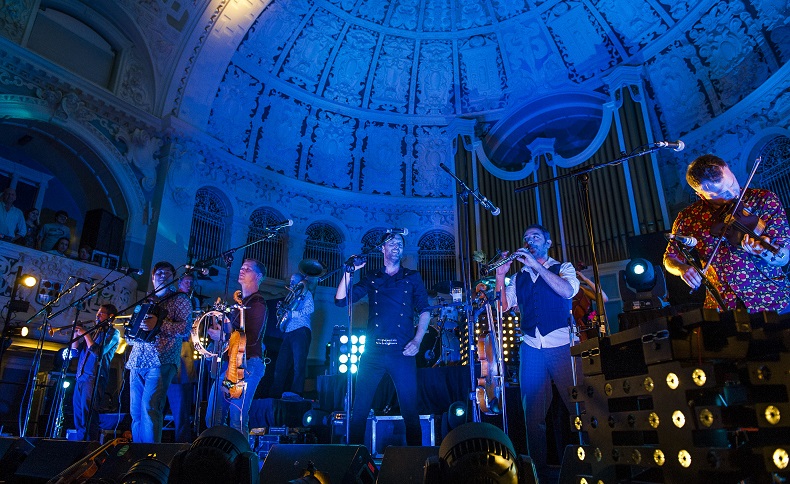 When folk’s favourite big band,  Bellowhead,  announced the parting of their ways during 2015, the anticipation of their  final tour together saw sell out venues wherever they played. Fans old and new clamoured to get one last view of the band who’ve set standards and shifted perspectives on the folk music world during their last twelve years together. Inevitably, the ‘final’  final gig was the one which was the hottest ticket of all. Mike Ainscoe was there and attempts to do justice to an unforgettable last hurrah of a band who leave a marked legacy.

Fitting it was too that the final Bellowhead gig would see them return to Oxford Town Hall. The place where they first performed live together on a bill which included Mawkin, the tour support act on this final run of dates who’ve given their own reputation an heck of a boost over the past couple of weeks.

Tickets for the gig had sold out in record time although amazingly there seem to be some released very late on at the box office for any walk ups. Anyone taking advantage of the last minute  bonus would have been greeted by a  queue of fans forming at the front steps of the Town Hall which had started to form over two hours before doors opened. Fair enough if  it’s a gaggle of teenagers desperate to get close to a hot young boy band, but a more sensible and mature audience of folk music fans? Maybe just clear evidence of the   dedication and the determination of the most loyal of fans to be right there at the barrier to show their love and support for their heroes one last time. In fact it was a coming together for a wake and was destined to be unlike any gig the band had ever done. Not for the obvious reason but for the fact that it was a chance to round off their career in the most appropriate way. Not a mega dome gig with gigantic ticket prices, but in a dignified fashion with friends and fans who’ve followed them through tens and in some cases three figures worth of gigs. 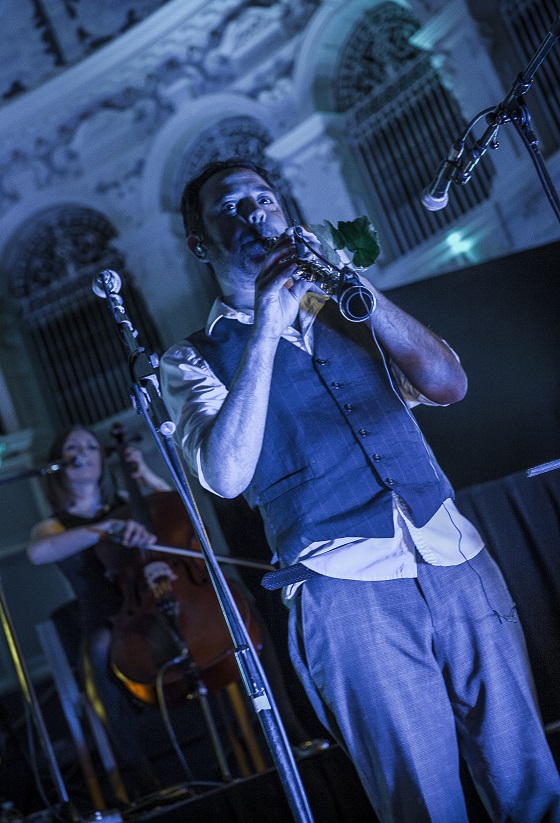 It was actually more akin to a  family gathering – “If you don’t know the actions; by now you must be stupid!” chides  Paul Sartin at the start of ‘London Town’ in the encores – and of course they/we all do. A group of fans  been with the band all down the twelve years and along many roads together and don’t need Andy Mellon to lead the “up – down – up” accompaniment.

Word in the queue is that the band are a little subdued and probably won’t be up for an after show session in local pub as has been the case on the tour. Realisation has hit everyone finally that the day has come.  It’s not just another last gig of another tour with a celebratory atmosphere and a chance to have a breather before the album/tour cycle kicks in again. Of course it’s a celebration but tinged – nay, steeped with sadness and it’s a strangely muted  atmosphere to begin with that support band Mawkin do a good job of lifting in the hour before showtime for one last time.

The eleven members of Bellowhead seem overwhelmed (in various degrees) as soon as they walk on stage. Appearing  in single file from the back of the stage, for once not festooned with  the brightly coloured abstract backdrops but plain black and framed by the ornate decoration of the town hall interior, they take their places with the gravity plainly etched in unsmiling faces. The town hall interior provides a stately setting indeed for an occasion which was to run the whole gamut of emotion. From solemn to joyous and into the openly moving and poignant.  The choice of Jacques Brel’s ‘Amsterdam’ as the opening song on the tour has made for a melancholy start to proceedings, but takes on extra significance this evening. Along with  the slower paced ‘Captain Wedderburn’ mid set it seemed to offer moments where band members were unmistakeably deep in thought and  reflection of the enormity of the experience.

Yet Bellowhead are ultimately about  the joyous and the uplifting – the usual pogoing and leaping about, the stage crossing, the shapes and poses which are part and parcel masked the  sorrow for a short while, yet as one song, one dance tune and then another ended, the sense that the clock was slowly ticking away in an anguished countdown was hard to disguise. The appearance of old boy Giles Lewin (“we traded him in for a younger model!” ) who was called up onstage for a blast through ‘Haul Away’ – helped form a formidable 5 fiddle onslaught and had him  admitting at the end “why did I leave!?” 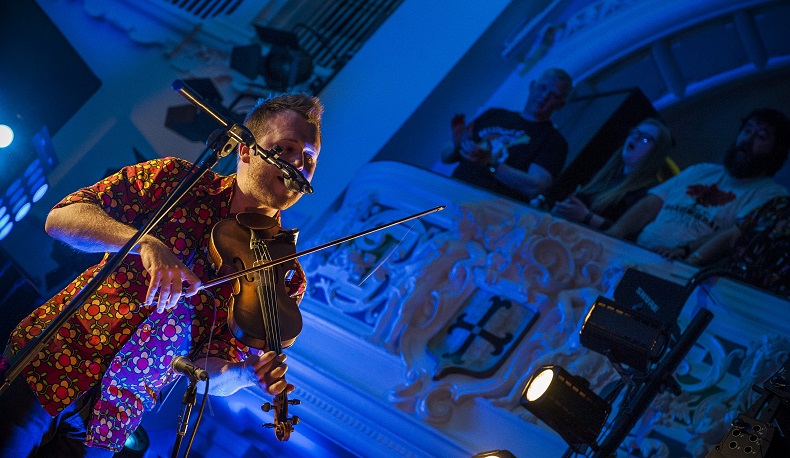 Hot and clammy it may have been, as the best gigs are,  but for once the towels weren’t  just for mopping away the sweat from the brow.  At times it felt as though you were peeking in on private grief; clearly emotional and visibly supporting one another through what is usually a jubilant gig and with Jon Boden swigging from a bottle of vodka, there was no getting away from the fact that the finality was taking its toll. It wasn’t until the very last unavoidable moment that  a whole bunch of thank you’s to all concerned from Benji Kirkpatrick – road crew, backroom staff and fans all acknowledged.  And in a night of bringing closure, again it was apt that the band would return one more time, as they have all tour, to play ‘Prickle Eye Bush’.  The first song they played together. Not the rabble rouser which would have the fans dancing along, but a cautionary  tale of being set free from the confines of the aforementioned bush. Something which Bellowhead have always strived to do – be free of convention and to shift from the stagnant and the norm;  to break barriers and to strive to make their music thrilling and adventurous.

How the band felt to knowingly walk from that stage for the last time…  To take one last look over the shoulder before the curtain fell for the final time – it truly was a distressing and moving  moment and an indication of how strongly  the individuals felt about ending their time together as a band. And for that time,  their twelve years together,  they’ve burned down the fences on which some people sit on or remain firmly stuck on one side of. Their flame has burned brightly by which many are fortunate enough to have been warmed and they’ve blazed a trail which has left an indelible mark.

All words and live photography  by Mike Ainscoe. You can find more of Mike’s work on Louder Than War at his author’s archive and his website is www.michaelainscoephotography.co.uk