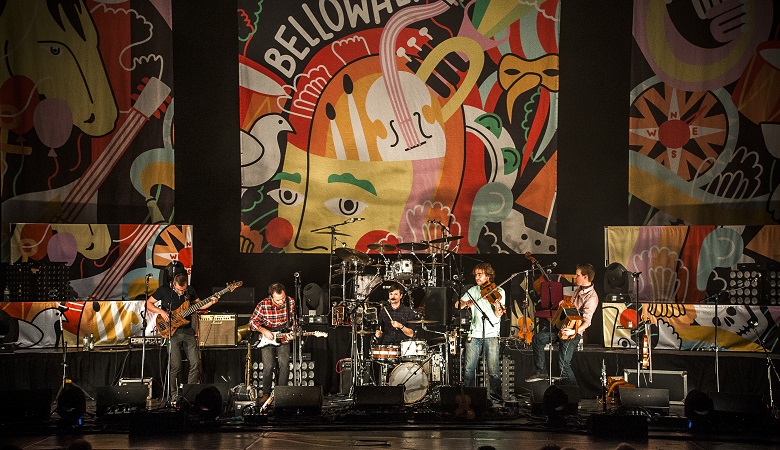 Better late than never comes the chance to look back on a couple of  Bellowhead gigs from a run of shows billed as their last ever before they bade their  final farewell in Oxford (LTW review here). Mike Ainscoe compares and contrasts gigs at Liverpool’s more refined Philharmonic Hall, watching as the seated assemblage were coaxed onto their feet, whilst the atmospheric confines of Halifax’s Victoria Theatre  invoked a vibrant party atmosphere from the off.

Before the main attraction though, a word about the additional bonus of Mawkin as the tour support. The five piece outfit have gone down a storm. With feet firmly in the folk field yet with what a rock band would term a rhythm section in electric bass and drums, the Delarre brothers fiddle and guitar plus  melodeon player (melodeonist?)  Nick Cooke’s half hour sets were pitched perfectly. A set of kicking tunes and songs belted out with gusto – even traditional songs with some good morals in (ie, sailors who stay at home) – oh, and plenty of drinking references, ensured that the level of vim and verve was well set before Bellowhead came to the party. Their current album, ‘The Ties That Bind’ is well worth a shout and if not, check out their website for a free live download of a show they played in Bath at the end of last year.

In Liverpool, with  the local red shirted footballers  being hailed for their stunning Europa League performances, another similarly celebrated XI were in town to make sure that the refurbished and ornate sold out Phil was going to bid them a suitable farewell.  A tongue in cheek or possibly ironic “Thanks for coming on this joyous occasion”  at the start of Brendan Kelly’s now (in)famous rambling intro to ‘Fine Sally’ was perhaps  a thinly veiled  indication of his view on the break up. Nonetheless, a set of two halves without the interval saw the first half tasters shift gear in a second half which was all out attack. 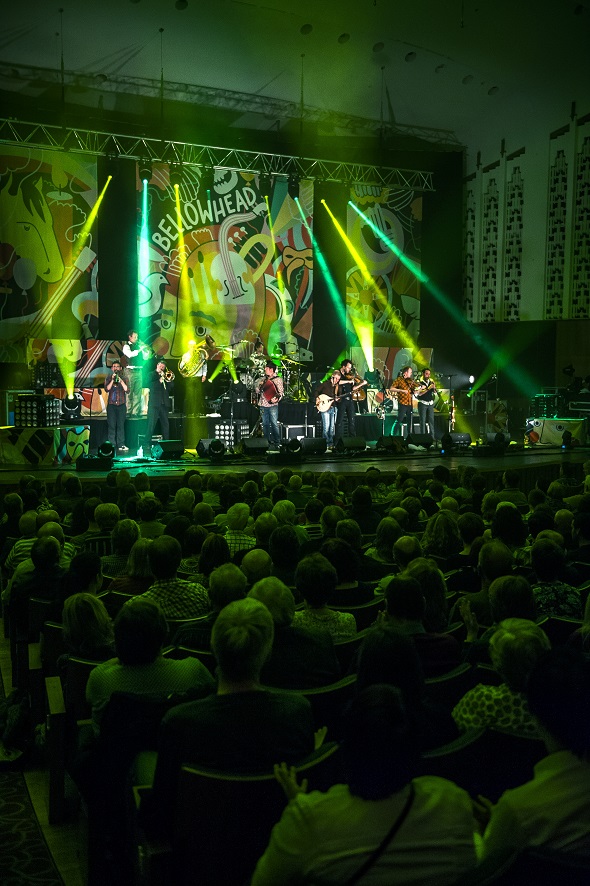 ‘Trip To Bucharest/Flight Of The Folk Mutants’ seemed to be the first ‘biggie’ of the evening, the hum of Rachel McShane’s ominous cello combined with Benji Kirkpatrick’s throbbing rock bouzouki  provides a touch of drama and suspense and the full band firing on all cylinders. Yes, it’s followed by the six minutes of  ‘Captain Wedderburn’ which people seem to love or hate, which takes things right down again. Akin not so much to hitting a peak and then slowly coming down; more a case of fall rapidly from the top.  Still, it proved to be the calm before the storm.

It seems to be the addition of ‘Fire Marengo’ – long absent from the set – which kicks off the party mood on this tour. A disco sea shanty in the best possible taste with Jon Boden removing the jacket to reveal a suitable  glittery waistcoat and muscle shirt to boot. Just about as far from the stereotypical aran sweatered finger in the ear folk singer as you could imagine. Maybe a dip into Eliza Carthy’s hair colouring box (blue seems to be currently in vogue) and the look would be complete.

Add to the look to some wah wah pedal powered electric guitar from Benji Kirkpatrick and it’s the launch pad  into  a second half which is as thrilling as Liverpool FC’s comeback against Dortmund.  A slight pause for breath for  ‘Fakenham Fair’ – basically a seated venue song – was the only respite. It took a call from Jon Boden: “it’s our last gig in Liverpool – stand up for us please!” to give the thumbs up for the stalls to rise as a man to let down the greying hair and indulge in some traditional old English uninhibited leg shaking. Hard not to really with the Morris attempts going on onstage and with the ‘Sloe Gin’ and ‘March Past’ sets of tune being impossibly catchy and foot tappingly hard to resist.

It’s what Bellowhead have been doing for the past twelve years. Injecting a shot of vibrant young life into what many outsiders see as a stagnant and staid genre of music which is the exclusive domain of their elders.  At the same time, bringing a similar vibrant young crowd to the table, making folk music sexy.

It’s the younger set who are up for a bit more uncomfortable jostling who pack out the standing areas in the stalls to bursting at the similarly ornate but more comfortably home-y Victoria Theatre in Halifax. Not long in they’ve  even caused Jon Boden to ask for some calm and to move back from the barrier.  The cause? Possibly  a bout of over zealous moshing combined with some  brave wheelchair bound fans  at the barrier – but that’s rock and roll, or should it be folk and roll.

Tonight Matthew, Bellowhead do Mills & Boon with their collections of early doors love songs – inevitably involving death and revenge. In times when doctors and Viagra were in short supply and dancing on graves was more common than in our politically correct times and when Swindon was the love capital of the UK.  When you sit down and take it all in, it is actuall quite amazing what these folk songs actually reveal. And there we all were thinking it was black Sabbath who invented doom and gloom. 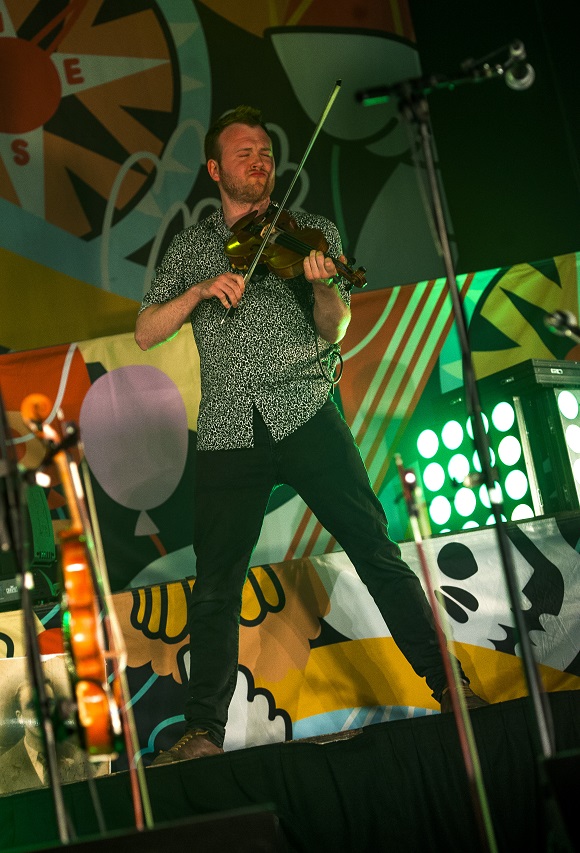 There’s also a bit of a  hauling theme going on in Halifax, maybe due to its proximity to the sea. In fact, there’s  more haulage than Eddie Stobart  as the band go totally left field, not quite abandoning their folk roots, but spraying them liberally with a punk attitude. ‘Little Sally Racket’ sees them abandoning the safe formula they’ve found with instruments abandoned and a primitive – tribal even – accompaniment; anything will do as long as you can shake it or bash it against something or somebody. A healthily yelled chorus of ‘haul her away’ delivered almost as a primal scream is good for the soul and is followed immediately  by  ‘Haul Away’. It’s a standing venue you see, so the sedate  ‘Fakenham Fair’ can be replaced with a sea shanty which has been one of the staple Bellowhead rabble rousers from day one. Good to see it staying the course and encouraging frivolity both on and offstage to the end.  A flurry of fiddles, high jinks and posing like good ‘uns, it provides the ‘just when you thought you couldn’t get any more lively’ moment.

And that’s before they even finish off with the obligatory audience participation swing of ‘London Town’ and frantic finale of ‘Frogs Legs & Dragon’s Teeth’, the latter the traditional closing tune, yet it’s most opportune that the first song the band ever played together should close out the lasts hows they’ll do as they tour the provinces. At the height of the carnival which is a Bellowhead gig, it’s a gentle reminder that this time it really is, as they’ve said, that’s all folks.

All words and live photography  by Mike Ainscoe. You can find more of Mike’s work on Louder Than War at his author’s archive and his website is www.michaelainscoephotography.co.uk