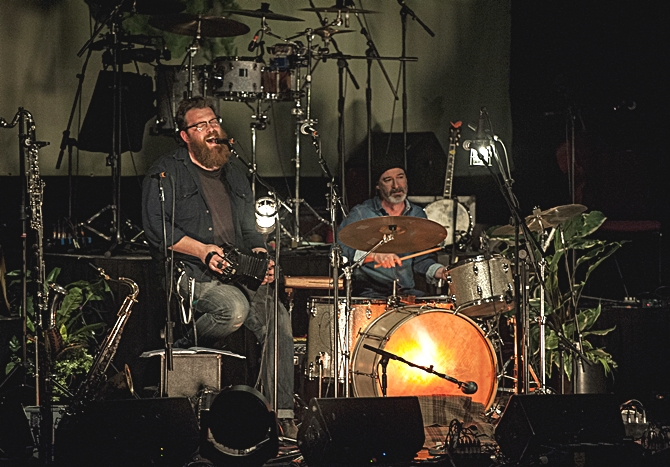 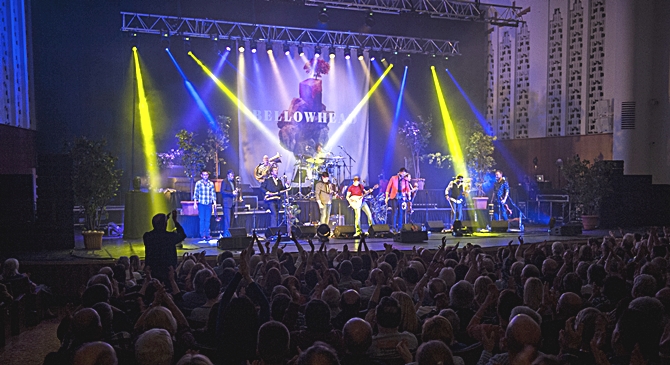 Signing to Island Records and touring their new ‘Revival’ album last November saw eleven piece folk mutants Bellowhead moving onto a new level. Never a band to let the grass grow under their feet, they’ve been back on the road with another run of dates plying their high octane brand of part folk-based vaudeville, part circus-styled music hall. Mike Ainscoe, once again, catches up.

Where else in a touring band, let alone folk music, would you see a duck-walking mandolin player and a pink-jacketed frontman with spray on skinny jeans whose fiddle bears a ‘Nazis Keep Out’ sticker? Any sharp-eyed punter against the barrier might have spotted the latter,  perched against the front monitor possibly in an attempt to ward off evil spectres (or over zealous security staff) who might try and party poop the Bellowhead revelry. Having said that, the security remained nothing less than respectfully low key with everyone out to enjoy an evening with the band who carry the weighty tag of being one of, if not THE, best live band around.

Less than six months after heading out on tour to help launch their high profile Island Records release ‘Revival’, Bellowhead were back on the road for a dozen back to back dates across the nation albeit with a more stripped down production. Even Paul Sartin’s flat cap seems to be taking a break. Not that you’d notice as all the main elements were there – the album cover backdrop, the raised platforms and of course the potted plants and sofas. Eagle-eyed fans with a technical bent might have spotted a lighting truss or two less but everything was trimmed sufficiently to shoehorn the set into the compact and standing stalls of Parr Hall in Warrington with room to spare (and frankly more room to lark about) in the rather more grand and spacious auditorium of the Liverpool Philharmonic Hall.

Before all that, there was an impressive little warm up slot from the Kings Of The South Seas. A project spearheaded by Ben Nicholls (better known as the double bassist in Seth Lakeman’s band) whose album  showcases a set of songs collected around the sailing and whaling theme. With some impressive ocean-based sounds signalling their arrival onto a dimly sepia-tinted stage, the atmosphere was bob on – shadows cast onto the backdrop, with the main lighting coming from  three lanterns on the mic stands and Ben sporting a beard so impressively bushy it was as if he’d been away at sea for six months himself. Their songs, broadsides and hymns all told of intriguing tales of cannibals and the taxing daily life on board a whaling vessel and with the likes of ‘Eight Bells’ it was an enjoyable and enlightening half hour and worth further investigation for a slight offshoot from the folk tree.

Back on Planet Bellowhead, the last tour had seen the setlist tweaked and modified into what they have ultimately presented in the set of songs and tunes of this tour. There seems to be a more rigid structure yet arranged to build up to what is, thankfully, a metaphorically balls-out climax. Most notable in the set  is an unrecorded set of tunes which made its debut in November. Known as ‘The March Past’, it slowly made its way from an early appearance to the business end of the set where its driving Celtic march and irresistibly jumping about/danceable provoking melodies are perfectly placed. The only thing missing is the distinctive skirl of bagpipes.

There’s an early chance for hi jinks  and audience participation with ‘Haul Away’ resored to proceedings, while the reintroduction of the drama and deep red/orange lighting for ‘Wife Of Usher’s Well’  is an epic set piece, verging on musical theatre, and in an arrangement which wouldn’t be out of place in Les Miserables. However, there’ s nothing miserable about a Bellowhead gig, the brass boys taking any opportunity to abandon their instruments and come together for some hilarious dance shenanigans or a spot of backing vocals and it’s then you realise how little Ed Neuhauser is – when he’s not being dwarfed by his massive helicon he’s being dwarfed by his bandmates.

‘London Town’ is the signal for party time, the audience participation encouraging the seated Liverpudlians to their feet and having got them there it was a case, a warning even from Jon Boden, of “don’t sit down!” for the rest of the show. Amongst all the bouncing inspired by final encore, the Game Of Thrones-sounding  ‘Frogs Legs & Dragon’s Teeth’, newly-crowned ‘Folk Musician of the Year’ Sam Sweeney leads the way by pogoing relentlessly and launching into Townsend inspired leaps and bounds, taking the opportunity to squeeze every  last drop of juice out of the Bellowhead tank.

So how do you make a good thing better? Well, for starters you can carry on the party in the pub after the gig which is what some of the band have been doing for a while now. Heading off to the nearest boozer with their instruments for a drinking and singing session where, if you have your own instrument (and for those who always carry theirs around with them) you can even play along! Or just sit and stare. From the polished show to heading back to the roots of folk music with community singing in the local alehouse, Bellowhead empitomise the full experience.

~
You can find Bellowhead on the internet here: www.bellowhead.co.uk.

All words and images by Mike Ainscoe. You can find more of Mike’s writing on Louder Than War at his author’s archive and his website is www.michaelainscoephotography.co.uk.