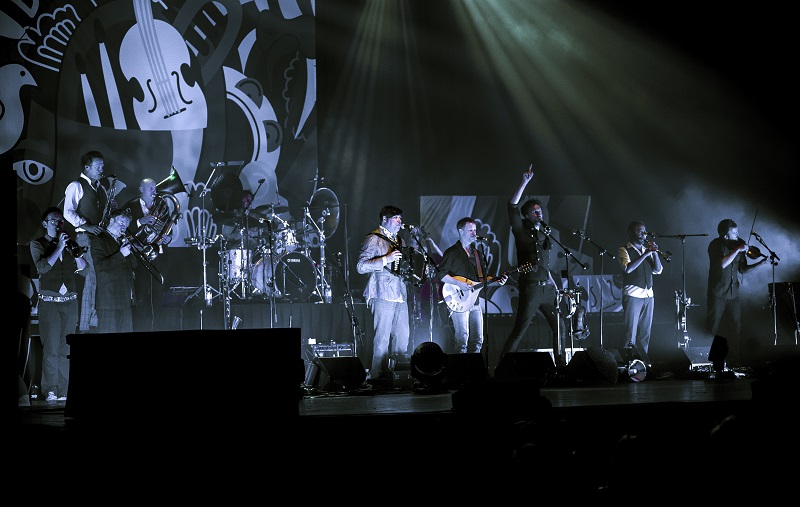 The tour they are calling ‘That’s All Folks’ or what Phil Collins once called something like  ‘The First Final Farewell Tour’. Bellowhead are calling it quits don’t you know and the celebrated eleven piece folk  show band are determined to go out with a bang – just as they  promise with every Bellowhead show.  Before the final stretch of dates next April, they  have a current run of  16 gigs on the bounce to help promote their ‘Pandemonium’  greatest hits collection; a tour which saw their first visit to the largest venue they’ve played in Manchester.

Not only playing the Apollo but getting pretty close to selling it out too – an indication of the extent of their popularity perhaps, or possibly an indication of people taking up the opportunity of the last chance to get to a Bellowhead gig and see what all the fuss was about.

Why it has to be so final remains puzzling. The Louder Than War assessment of the impending split (here) speculated that we may not have seen the last of Bellowhead and that they may follow on in the great rock tradition of a money spinning reformation sometime in the future when the urge to do it all over again returns. The question remains of would  it have not been easier and less painful for their faithful followers to simply have announced a time-out and leave the door not so much open but slightly ajar rather than slamming it firmly shut. Maybe an issue which will be debated in folk clubs and beyond for some time to come.

What remains is the fact that in the light of the farewell announcement, this first leg of the tour seems to have done very solid business and judging by advance sales, next year’s final run of dates in April will be the same if not better with many dates already sold out. Spotting manager Mark Whyles wandering  through the stalls, he’ll be pleased that the band have justified  the transition to the larger auditoriums. Cynics might point out the big business involved in farewell tours and in particular comeback tours , especially if the gap is long enough – just ask Jeff Lynne.

Aside from the music, keen eyed members of the Apostrophe Appreciation Society, or possibly any teachers in the house, might have spotted (and generally tutted and muttered about the standards of grammar of today) the apostrophe in the wrong place on the list of stage times dotted around the foyer – Keston Cobbler’s Club instead of Cobblers’, it being the plural, a club for any number  of cobblers from Keston. 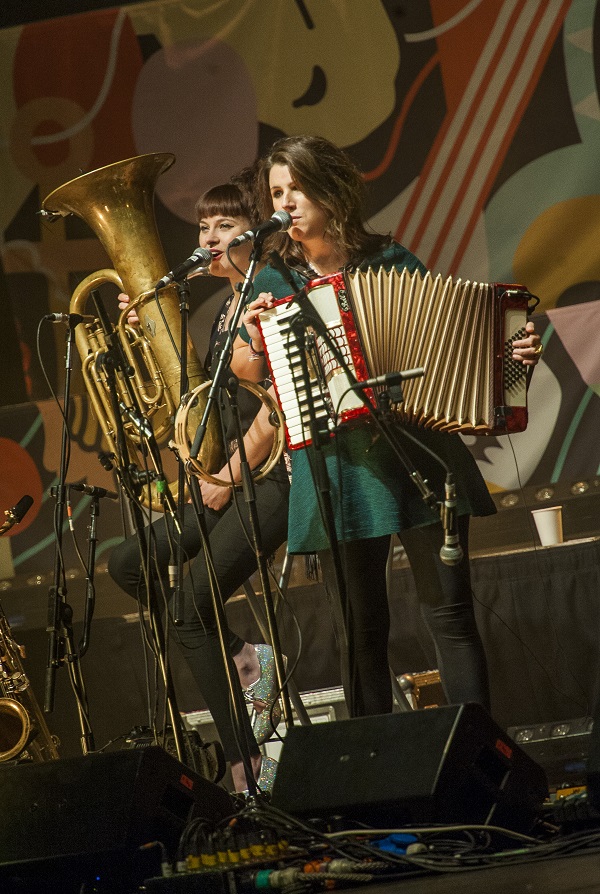 Set as far back as a penalty spot from the lip of the stage, KCC (let’s call them for the sake of not misusing the apostrophe)  have been proving why they are (a) a perfect support for the main attraction with their infectious songs and instrument swapping appeal and (b) why they are such a draw on the festival and small room circuit. Not that anyone was moved enough to be up on their feet – it even took Bellowhead the best part of their own set to get that reaction, but they are a band hard not to like.  With Bethan  Ecclestone  sporting what looked like a pair of Bellowhead’s Rachel McShane’s sparkly shoes, they’ve revelled in the chance to open for a band who they clearly admire and they have an  endearing appeal  in their stage presence and in their material. About  as far removed from the slavering rock dogs like Anthrax who’d been on the same stage a few days earlier, than you can get. The trumpet and tuba giving that ‘oom pah pah’ good time carnival vibe. And they give away CDs and hand out postcards face to face with the audience as they leave at the end of the night to advertise their run of gigs in the new year – Band On The Wall on 25th Feb for any locals.

At least the space downstage gave plenty of room to Bellowhead sax player  Brendan Kelly to run amok and unashamedly dance to his heart’s content later in the evening and given that his band included in their set plenty of morris tunes, tunes in general and sea shanties – which is handy when you have a crowd full of the usual sailors and morris dancers – Bellowhead take the Cobblers’ infectious energy to a new level.

The gig saw them swapping the set list round yet again as there will be plenty fans who have already taken to social media to announce their intention to catch as many shows as possible, the opening and closing sections seemingly pretty set but with about 45 songs programmed into Emma Thompson’s lighting desk, there’s always room to try something a bit special. It’s usually the run up to the final flourish of ‘London Town’ that gets jigged and tonight, as seems to be the case on the tour in general,  the song that lit the blue touch paper was  ‘Haul Away – a song the band have never actually committed to record, but  which always has the desired effect . Even so, it took Jon Boden to announce the approval of   “you can stand up you know!” for the crowd to get off its collective behind. It’s was a  key moment where the gig seemed to shift a gear and buoy the band into action, epitomised by Folk Musician Of The Year, Sam Sweeney going through his full range of  pogoing and scissor kicking off the stage blocks – that after announcing  his dream to play at the Apollo. 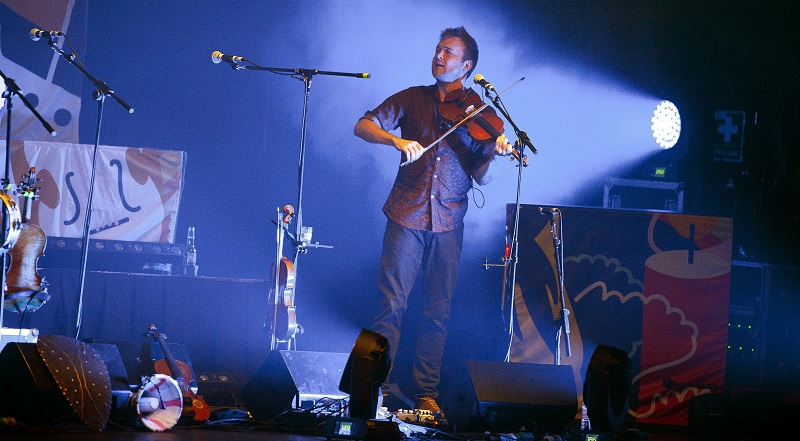 Although it appears mid set, the choice of ‘Let Union Be’ as the potential  final ‘final’ song when that moment comes, with its refrain “we’ll end the day as we’ve begun we’ll end it all in pleasure” springs to mind. Could it go into the history books as the song with which they choose to bring down the curtains.  If not, then they could bow out in  no better way they’ve been ending the current shows, the band lined up across the stage for a final encore of Richard Thompson’s ‘Down Where The Drunkards Roll’.  Stepping back from the mics to give the effect of an unplugged performance and passing the vocal between them while the brass section effect something akin to a  last post call, there may have been a few  in attendance with a lump in their throat. Come 1st May at Oxford Town Hall, should it all end in the same way you can reckon on there being  not too many dry eyes in the house.

So that’s not quite all folks. Not yet. Stick around for the April 2016 gigs to really see them once again tear up the folk music rulebook,  and bring down the curtain  with a tour not to forget.

All words and live photography  by Mike Ainscoe. You can find more of Mike’s writing on Louder Than War at his author’s archive and his website is www.michaelainscoephotography.co.uk