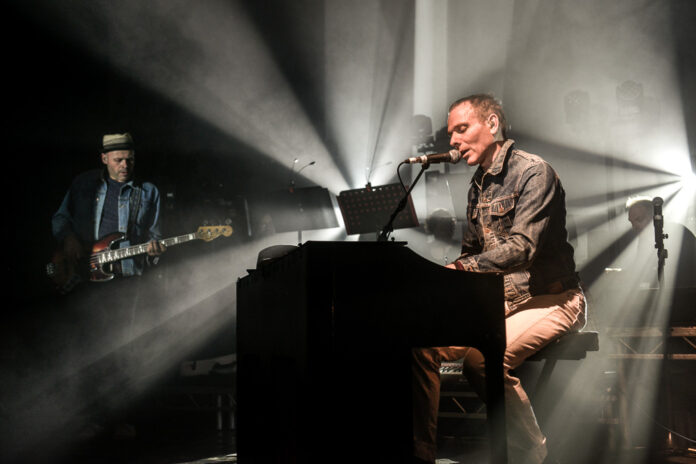 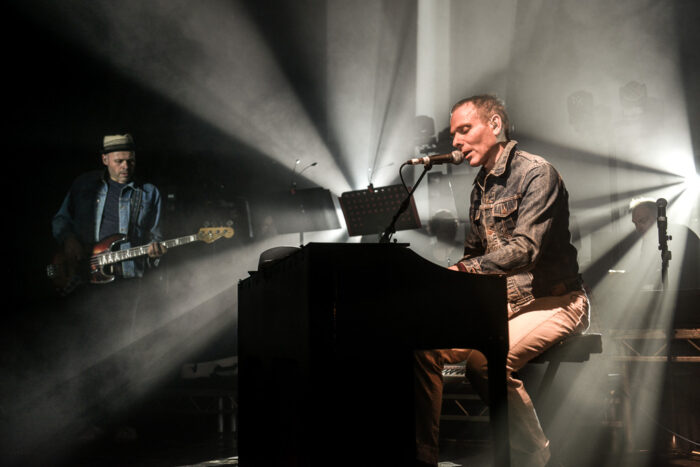 Photo of Belle and Sebastian above © Valerio Berdini

(With photos by Valerio Berdini from Corn Exchange in Cambridge on 7 May, 2015)

A Belle and Sebastian tour has become a bit of a rarity, but with a new album out the band has taken to the road to encourage fans to “Jump to the beat of a party line”. Louder Than War writer and massive fan Nyika Suttie went along to the Bristol gig.

To say I love Belle and Sebastian is almost an understatement, and so I was very excited to hear that they were not only going on tour but playing the Colston Hall in Bristol. Having thoroughly enjoyed their latest album “The Party Line” I was keen to see how the more disco tracks translated when played live, and also to have a good dance. I was far from disappointed. 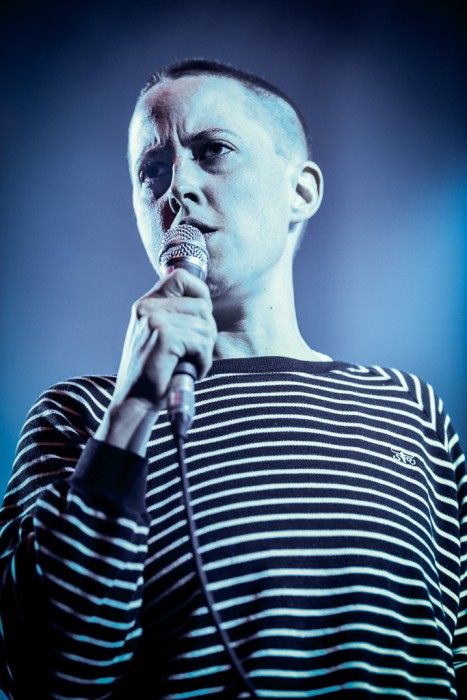 First came the support, Lower Dens, a four piece hailing from Baltimore, Maryland headed by the rather wonderful Jana Hunter (see photo, right). They presented moody, atmospheric indie rock with sweeping melodies and rapturous climaxes. It was a bit of a shame that I was distracted by the tightness of the bass player’s trousers but they played a solid and enjoyable set.

The venue itself is usually filled with chairs, but for this concert the stalls were moved back leaving a large standing area for those who wished to stand. There were also seats in the balcony and these were filled to the brim. Drinks were typically expensive but not shockingly so, and the selection was good. The venue seemed to have good access for all gig goers.

Between the two bands a film was played, detailing the regeneration and manufacturing revolution in 1960s Glasgow. “We’ll now show a short film, you can watch it if you want, or talk amongst yourselves” announced a roadie, and it was clear most had chosen the latter option. Being at the gig by myself it was a welcome distraction, but very of its time. If you’re not interested in city regeneration it probably wasn’t going to be for you.

And then came the fantastic Belle and Sebastian, firstly the string and trumpet players, and then everyone else, piling onto the stage and somehow fitting despite there being so many of them. They kicked straight into their current single Nobody’s Empire to smiles from the crowd, and it was thrilling to know that the band’s revised sound was as good live as it is on record. And then it was time to exchange niceties and banter with the crowd, something which continued pleasantly throughout the set. A particular highlight was a discussion on Stuart Murdoch having sung Jump by Van Halen at a karaoke night, prompting a shout of “he’s a tory” in reference to Eddie Van Halen. This was to become something of a theme. 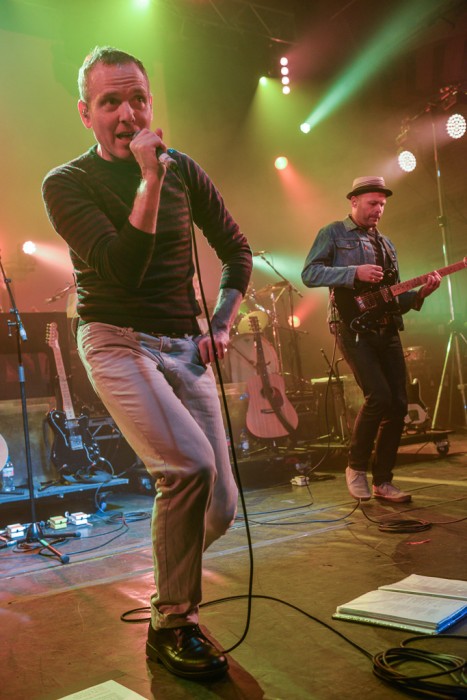 Older songs such as Another Sunny Day, I’m a Cuckoo and If She Wants Me were interspersed with the inevitable The Party Line (which sadly did not whip the crowd into the frenzy promised by Murdoch, although I was dancing) and other newer album songs The Cat with the Cream and The Power of Three. I was personally thrilled that they played Electronic Renaissance with an excellent Keytar performance from Stevie Jackson and brilliant visuals from old computer games.

In fact the visuals were pretty special throughout, spanning from music videos to graphics made especially for the gigs. Between certain songs we were treated to a word by actress Tamzin Merchant, all RP and victory rolls teasing the crowd and patronising the band. This was an interesting touch and worked quite well after the initial bemusement

Of course the gig was on May the 4th and thus a special tribute was played to Star Wars with pictures picked by multi-instrumentalist Sarah Martin, all, it turned out, featuring Harrison Ford. “Chewbacca’s there too” said a slightly embarrassed Sarah. “He’s a Tory!” came a shout from the crowd. 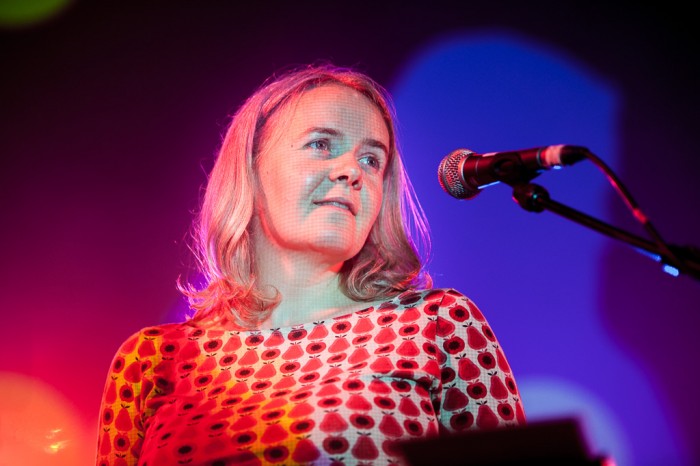 Finally, after a beautiful rendition of A Summer Wasting it was time for the customary stage invasion by the audience to dance to The Boy with the Arab Strap. And to my absolute joy I was picked to be manhandled over the barrier and to dance on stage! Not only did I get to temporarily be a member of my favourite band in the world but Stuart Murdoch spoke to me personally whilst I pretty much died on the spot. Obviously this is a bit of a personal review but if you’re ever at a Belle and Sebastian gig and you get the chance to go on stage you must do it. It’s the best fun ever, although like me you may end up forgetting the words to a song you sing in the shower all the time.

The stage invasion continued through Legal Man and then it was time to rejoin the audience for the finale of La Pastie de la Bourgeoisie. And with that the band walked over, leaving us to go through the rigmarole of the false encore.

Thankfully the band came back on and asked us what we wanted to hear. After rejecting Your Cover’s Blown (as they do at nearly every gig), The State I am In was chosen, the first song from the first album (and probably my favourite song ever). It wasn’t a raucous ending but it was perfect all the same, rather like the rest of the set. Nearly 20 years after their inception the band are still as enchanting as ever, and it was a privilege to see them.

Lower Dens can be found online here: lowerdens.com. They’re also on Facebook and they tweet as @lowerdens.

All photos are copyright Valerio Berdini whose excellent website, Live on 35mm, is here: valerioberdini.com & who blogs here: liveon35mm.com. You can also keep up with Valerio on twitter: @liveon35mm

All words by Nyika Suttie. You can find more of her reviews here, she’s on Twitter as @puzzledbyadream and her blog is Outsider Looking Out.