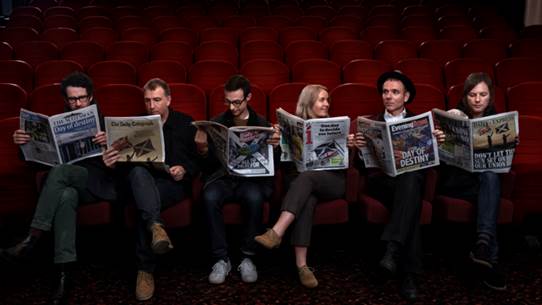 Fresh from the news that they’re to release their ninth album in January (see video of a new song from the album at the foot of this page), and to help promote a series of re-issues, Belle and Sebastian tagged a couple of UK dates onto the end of their recent short tour of the US & Mexico. One of these was at Manchester Cathedral last week, from where Louder Than War’s Fergal Kinney reports back.

Lurking from its hiding place beneath the collar of a beige harrington jacket, it’s possible to detect a smirk rippling across the face of Stuart Murdoch, presumably at standing onstage in a cathedral with no less than a keytar across his shoulders. The keytar – a portable keyboard on a strap much like a guitar, for the layman – is pivotal to the first song of tonight’s set at Manchester Cathedral, ‘Enter Sylvia Plath’, taken from their first new album in five years scheduled for release early next year. Though tonight is technically about promoting the Matador re-issues of their formidable back catalogue (more on which later), hearing ‘Enter Sylvia Plath’ for the first time it’s understandable quite why Belle and Sebastian want to show it off so swiftly. Light on guitars and heavy on the synths, this is an infectious disco homage with a gorgeous Sarah Martin backing vocal line, and sounds not unlike Pulp circa “His’n’Hers”. Despite having a name as steadfastly Belle and Sebastian as could be imagined, ‘Enter Sylvia Plath’ is streets away from their comfort zone, a sure fire contender for a single and – given its billing as first song of the set – something of a statement of intent. Not since ‘Dear Catastrophe Waitress’ has this band sounded so utterly enthused, and whilst the only other track from their forthcoming album ‘Girls in Peacetime Want to Dance’ is more conventional indie pop – ‘Perfect Couples’ – it still sounds like a band back to the top of their game. Tonight is as near to a greatest hits set as you’ll get from Belle and Sebastian, and that these two songs hold their own so fiercely against the heavyweights of their back catalogue is reason enough to get excited about this band again.

This short national jaunt is to promote the re-issuing of Belle and Sebastian’s nine studio albums and two b-side compilations, thus the set is suitably picked from a cross section of most of these records. ‘Dirty Dream Number Two’ from the seminal 1997 ‘the Boy with the Arab Strap’ is aired early, introduced with an apology from Stuart Murdoch for having performed a lacklustre version of this in Manchester upon its release and promising to do it justice tonight “with considerable gusto”. Coming good on their promise, this is one of the standout moments of the set, a track that betrays the clear love of soul music that pulsates through much of Belle and Sebastian’s back catalogue, sweetened by the presence of a string quartet and given an autumn leaf crunch by Stevie Jackson’s chopping Velvet Underground guitars. From this point on the gems of the B&S back catalogue are fired out at breathless pace, there’s barely time to catch ones breath after ‘She’s Losing It’ from their debut Tigermilk before ‘the Model’ – a standout from their first non-essential album ‘Fold Your Hands Child, You Walk Like a Peasant’ – is in full flow. And yet, amidst all of these career highlights, it’s the title track of their 1996 unspeakably gorgeous ‘If You’re Feeling Sinister’ that packs the biggest punch as the rhythm section shuffles uneasily against the woozing guitars resonating across the cathedral. Tonight’s celestial setting is aesthetically note perfect for this side of Belle and Sebastian – hymns of Glasgow summers wasted and endless bus journeys, the best of Stuart Murdoch’s writing has in itself a quasi-religious melancholy/celebratory quality that renders him peerless as a songwriter. Though softly spoken and thoroughly pleasant onstage – especially tonight – it’s the darkness that Murdoch is able to tap into for songs as deeply haunting as ‘If You’re Feeling Sinister’ is one of the most compelling aspects of his writing.

Hot on the heels of ‘the Boy with the Arab Strap’ – with its exquisite aping of Chicory Tip’s ‘Son of the Father’ and Murdoch’s customary invitation of much of the audience to join the stage in lieu of a makeshift dance troupe – is an airing of 1999 single ‘Legal Man’, another blue-eyed foot stomper complete with an Eastern sitar riff, and the Cathedral resembles much more an indie disco than a reverential place of worship. Indeed, it could have been a brilliant career spanning set – if it wasn’t for the venue itself. Questions have to be asked about the suitability of Manchester Cathedral for this sort of thing; about a third of the paying punters have little or no chance of seeing the stage itself, and even on an especially cold October night the heat in the Cathedral is thick and unceasing. That said, Murdoch – a surprising but proud Christian himself – has fun with the gig’s setting and I can selfishly manage to ignore that much of the room can’t see and revel in the settings for a couple of songs.

As the gig comes to a conclusion, with a montage of the band’s album sleeves to date projected behind the stage, Murdoch’s attempt to introduce the band is curtailed by Stevie Jackson’s opening chords to ‘Me and the Major’ from ‘If You’re Feeling Sinister’, and if I were Jackson I would do much the same, this tale of generational friction being one of the most thrilling moments of the entire Belle and Sebastian back catalogue. Tonight, Belle and Sebastian have pulled off the feat of shining a torch on the best of their achievements in nearly twenty years whilst suggesting that there are still many achievements yet to come in the very near future, and once again the world is all the better for the presence of this remarkable band.

Belle and Sebastian release their 9th studio album in January. The album was recorded in Atlanta, GA. with producer Ben H. Allen III (Gnarls Barkley, Animal Collective). They also have a host of dates lined up for May 2015, full details on their website: belleandsebastian.com.