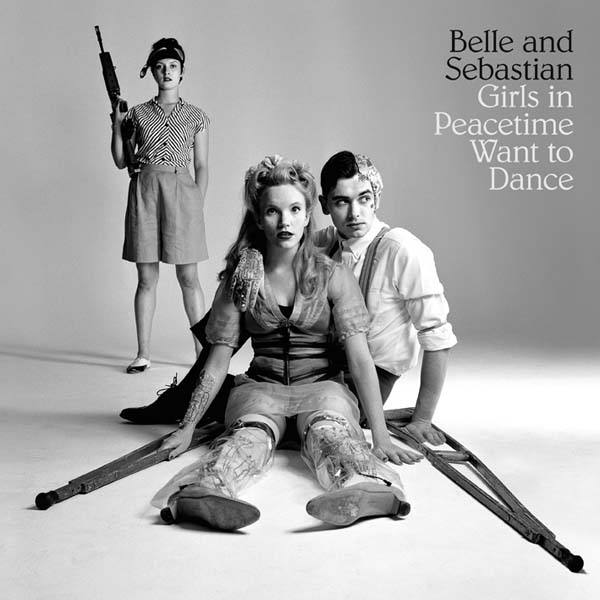 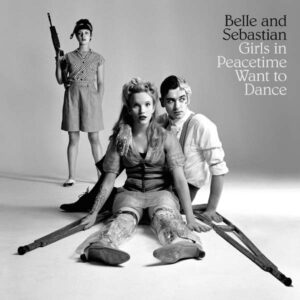 “Be popular, play pop and you will win my love” enthuses Stuart Murdoch’s imagined love interest on ‘the Everlasting Muse’, a maxim that could well be applied to the band’s career to date – from the opening, aching croon of ‘The State I Am In’ to the present day, Belle and Sebastian are nothing if not a terrific pop group. Like Morrissey and Marr, it’s easy to imagine Stuart Murdoch viewing his work as the height of conventional pop classicism even when it inevitably sounds anything but.

‘Girls in Peacetime Want to Dance’ is the ninth studio album by the Glaswegian defenders of the fey, and their first after a half-decade hiatus in which Murdoch wrote and directed the quasi-autobiographical musical ‘God Help the Girl’.

Opening track ‘Nobody’s Empire’ is as beautiful a piece of gospel drenched indie as one is likely to find and not only is it a standout on the album, but it ranks alongside Murdoch’s finest compositions, not least owing to the emotional punch packed by the song’s subject matter – Murdoch’s pre-fame struggles with chronic fatigue. Much of his writing has contained allusions to this period, indeed it looms large in the Belle and Sebastian mythology, but ‘Nobody’s Empire’ is the first time Murdoch has addressed it in a song. Another of the finest moment’s on ‘Girls in Peacetime…’ was itself penned around the time of Murdoch’s recovery, the gorgeous acoustic led track that channels Nick Drake via Hatful of Hollow, ‘Ever Had a Little Faith’.

The most striking new development on ‘Girls in Peacetime Want to Dance’ is the arrival of a disco influence verging almost on the Europop – on single ‘The Party Line’ and the exquisite ‘Enter Sylvia Plath’ are pure Giorgio Moroder and sound like nothing in the band’s ample back catalogue. The seven and a half minute ‘Play for Today’ – all washing synths, breathless vocals and, er, calypso – is equally unimaginable on any previous Belle and Sebastian albums. Of course, Belle and Sebastian are no strangers to electronic music – see also ‘Electronic Renaissance’ or ‘Sleep the Clock Around’ – but much of ‘Girls in Peacetime Want to Dance’ is totally synth led, expansive and contemporary, occasionally recalling Arcade Fire’s ‘Reflektor.’ Shambling twee this most certainly is not. ‘The Everlasting Muse’ harks to a very different European sensibility, the slick French pop of its verses giving way to the all out polka of its delightfully earworming chorus.

Whilst the democratisation of songwriting within Belle and Sebastian has occasionally proved thorny, ‘Power of Three’ and the superb ‘Perfect Couples’ by Sarah Martin and Stevie Jackson respectively are two of the album’s real highlights – you can tick off ‘Perfect Couples’ for biggest-Belle-and-Sebastian-stereotype moment at the reference to organic figs. Curiously, perhaps heightened by the recent Scottish referendum (of which Murdoch was an eventual convert to the Yes cause), there’s more than a whiff of the political on this album. The stomping ‘Allie’ sighs at ‘bombs in the Middle East’, whilst the blissfully lethargic ‘Cat with the Cream’ is brimming with brilliant imagery of the ‘grubby little red MP, yellow flapping hopelessly, Tory like the cat with the cream’ (reminiscent of Guy Garvey’s excellent “a former MP … chinless prefect-gone-Godzilla”).

Whilst the energy of the record does struggle to sustain across its hour long span, especially by the slightly lethargic ‘The Book of You’, this does little to dim what is Belle and Sebastian’s strongest, most diverse and certainly most coherent offering since ‘Dear Catastrophe Waitress’.

A sharp and contemporary pop record, this is Belle and Sebastian nine albums in and suddenly making the next few albums seem like a very exciting prospect indeed – a rare feat.