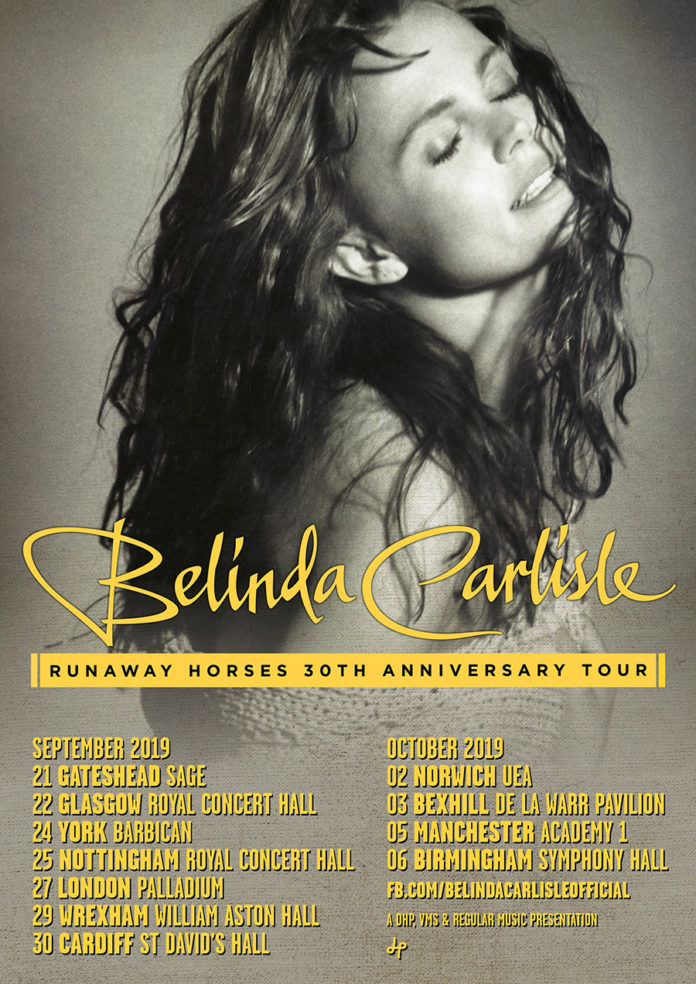 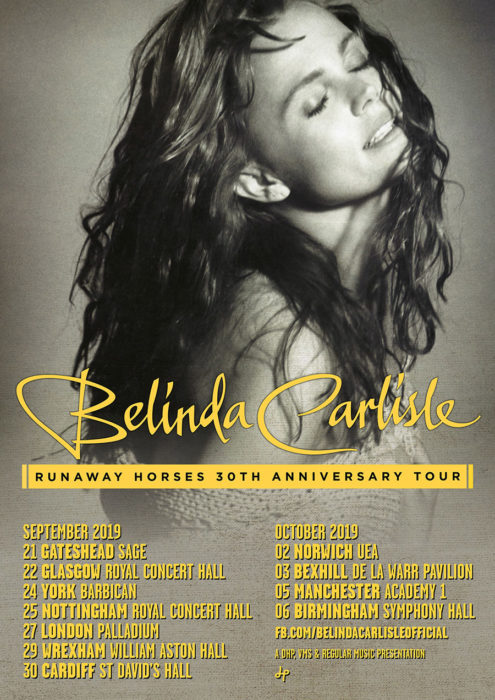 American artist Belinda Carlisle began her musical career playing in Los Angeles punk band The Germs as their drummer in 1977.  In 1978 she was fronting the influential all-girl band the Go,Go’s, who went on to have a string of hits in the 80’s. From 1985 she began her highly successful solo career with chart topping hits all around the world.

Following the success of the ‘Heaven on Earth’ anniversary tour in 2017 Belinda Carlisle is once again touring to celebrate the anniversary of her third solo album 1989’s ‘Runaway Horses’.

In a nod to her birthplace, Belinda arrived onstage to the Beach Boy’s ‘California Girls’, she was met with a rapturous welcome from the audience as she launched straight into an energetic rendition of the album’s title track ‘Runaway Horses’.

Addressing the audience she explained that this was a celebration of the album and that she would be singing every track from the album, which meant that she was playing some of the songs live for the first time in the UK, including some of the “deeper cuts” as she called them.

Rather than simply playing the album tracks in order of songs she mixed the setlist up with songs from throughout her career her first single ‘Mad about you’ and songs from her first 5 studio albums.

Backed by a five-piece band, Belinda gave a polished and confident performance with strong vocals and plenty of audience interaction as she danced around the stage clearly having a whale of a time.

It is hard to believe that 30 years have passed since the album, which spawned six singles, peaking at number 4 on the UK charts and featured guest artists including Bryan Adams and George Harrison, was released. The songs were faithful to the original versions and as she explained before performing the album track ‘Deep, Deep Ocean’ that this particular track she wasn’t happy with on the album, but had learnt to love it when performing live.

The audience were clearly enjoying the trip down memory lane with the biggest reactions saved for songs such as ‘Summer Rain’, ‘Live your life be free’, ‘Circle in the sand’, ‘Big scary animal’ and of course the 80’s anthem ‘Heaven is a place on earth’. Everyone danced and sang along and when it came for the show to close there was deafening cheers and applause before Belinda and her band returned to the stage for the two encores.

This was a show with simple staging and no gimmicks, but Belinda ably carried the show and captivated the audience. With her distinctive voice, she was sounding and looking great, this really was an impressive performance from one of the 80’s biggest female artists.

It will be interesting to see if she continues with the anniversary celebrations and tours ‘Live your life be free’ in 2021?