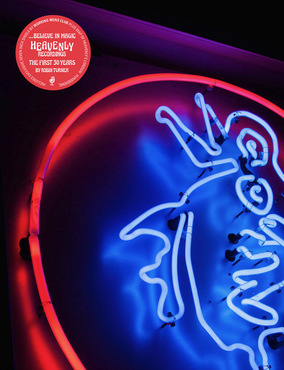 A delicious panoply of voices archiving the visions and sounds of an inimitable record label.

This is a thirty-year chronicle, in full and glorious colour, of the singular Heavenly Recordings. I can’t imagine a better book to capture the beauty, the ingenuity, and the wholehearted ethos of Heavenly than Robin Turner and Paul Kelly’s Believe in Magic: 30 Years of Heavenly Recordings. White Rabbit is quickly establishing itself as one of the most fantastic presses for music books on any side of the Atlantic. This is a book for lovers of the bands on Heavenly Recordings and the Heavenly Sunday Social club, but it’s also an object for collectors. Immense care went into the book itself and into the ephemera that accompanies it: a 7” Saint Etienne or Working Men’s Club vinyl, depending upon the edition you get, and a specially commissioned fold-out map of the London spots that feature prominently in the thirty-year history of the label.

One of the things I love the most about this book is its collective nature. Robin Turner and Paul Kelly are listed as the authors (and what fantastic writing and design), but this text is truly a community vision. Each chapter contains commentary, in the form of past-tense memories and brief recollections, from musicians, managers, promoters, designers, DJs, and others tied to Heavenly’s distinguished history. There’s Andrew Weatherall, Bob Stanley of Saint Etienne, James Dean Branfield of the Manic Street Preachers, Beth Orton, Sally Rodgers of A Man Called Adam, Annie Nightingale, Jon Savage, Mark Lanegan, and so many others. All of these voices contribute to Believe in Magic, offering perspectives of Heavenly that you can’t get anywhere else. It’s rare to find a book with such a delicious panoply of voices archiving the visions and sounds of an inimitable label.

Of course, Heavenly isn’t just a record label. As Robin Turner writes, at its heart, Heavenly is “a design for life for whoever wants it.” Its legacy proves that the best labels aren’t just putting out music—they’re creating a vision, an ethos, a “state of mind,” as Jeff Barrett calls it. Naturally, Believe in Magic is a chronicle of Heavenly’s music releases and the figures defined by their association with the label over its first thirty years. Yet it also records so much more than those music releases. A chapter, for example, focuses entirely on the Heavenly Sunday Social, while another documents the “Heavenly Hairdresser” Christopher Camm. A full-colour page toward the end of the book reminds us of the stylish and varied typography that drew listeners and fans to Heavenly in the first place. It’s all part of what Nicky Wire describes as “the maverick spirit of Heavenly.”

As a physical object, Believe in Magic is also an homage to the analog. In an era of mass digitization, Paul Kelly (and White Rabbit) pays close attention to the book as physical object, illuminating the corporeality of music. The hardcover book has luscious royal blue endpapers followed by—instead of typical fly-leaves—full-page, full-colour reproductions of Heavenly images. Those graphics speak to the DIY ethos of Heavenly, but also to the pzazz and enchantment of the label and everything it produced . . . the magic, as it were. The physically dense leaves selected for the book reflect the substance inside it. Lightly coated, each page has a weighty yet silky feel within the reader’s hands.

The sheer number of full-colour images throughout the book is stunning. Nearly every page has gloriously saturated reproductions—a wide variety of detailed handwritten letters, photographs, handbills, NME and Melody Maker covers, record labels, contact prints, band t-shirts, and storyboard sketches for music videos. In some of the final pages of Believe in Magic, there’s a visual archive of every Heavenly Recordings single sleeve made, followed by a detailed list of Heavenly catalogue numbers.

Given that each chapter focuses on a specific album or entity linked to Heavenly’s thirty-year narrative, readers can absorb the text wholly from start to finish or can spring between and among sections, exploring Believe in Magic based on specific interests. The book is certainly for Heavenly fans. Yet it’s also crafted in such a way that anyone who loves music, and the inventiveness of sound and sonic design, will soon discover that they, too, are Heavenly devotees.

You can purchase Believe in Magic from Rough Trade and other booksellers, and you can buy copies of Heavenly Recordings albums and singles direct from the label, from Sister Ray, and your other favorite local record stores.